Redis and Memcached are both popular in-memory data storage systems.

Aws has a comparison for them. We can see from the table, Redis beats Memcached almost in every aspect: 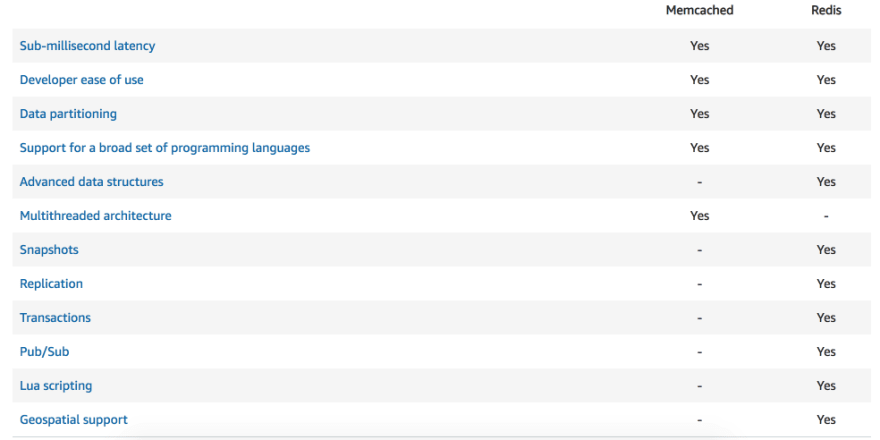 Memcached has better performance for big data, such as data of 100k or above.

Redis is single-threaded and will beat Memcached on small data reading and writing.

There is only string type in Memcached.

These data types are useful for different scenarios and needs.

The largest data size can only be 1 MB in Memcached, while we can use the maximum of 1GB in Redis.

Memcached does not have a mechanism for persistence.

Redis supports AOF(Append Only File) and RDB persistence for persistence. This is very important for many applications. We could use Redis as a NoSQL database.

Memcached itself does not support distributed mode. We need to adapt distributed algorithms such as Consistent Hash for distributed storage of Memcached.

Redis provides builtin support for clustering and is bundled with a high availability tool called redis-sentinel. Redis Cluster supports a maximum of 4,096 nodes.

Redis could do everything that Memcached targeted to.

Choose to use Redis whenever possible.

The post Redis Vs. Memcached appeared first on Coder's Cat.

Introduction to Redis and Caching with Node.js

Keep your front-end servers stateless to make them scalable

Nic
Programming for 16 years. Write stuff about programming and writing on coderscat.com. Programming languages, security, algorithms.
The Tools For Programming Languages
#misc
How to config HTTP/2 with Nginx
#misc
5 Tools To Boost Your Productivity on Windows 10
#misc