Allows you to run a service on your local machine while also connecting other services on the remote Kubernetes cluster.

It is difficult to test and debug a service in a complex microservice architected applications from you local machine.

For a developer with a machine 16 Gigs of RAM, it is difficult to spin up docker compose or minikube to run all the applications on a local machine. You might just end up heating 🔥 the system.

From the time you commit the code to it be available on the cluster, it goes through below phases :

So by the time the code it available on cluster, the developer slips a good 4-6 mins on every change made to the code which is to be tested on cluster.

Any traffic routed to the service will now be proxied from the kubernetes cluster to the local machine.

Which means your machine is now part of the cluster and is serving the live traffic from the cluster environment. 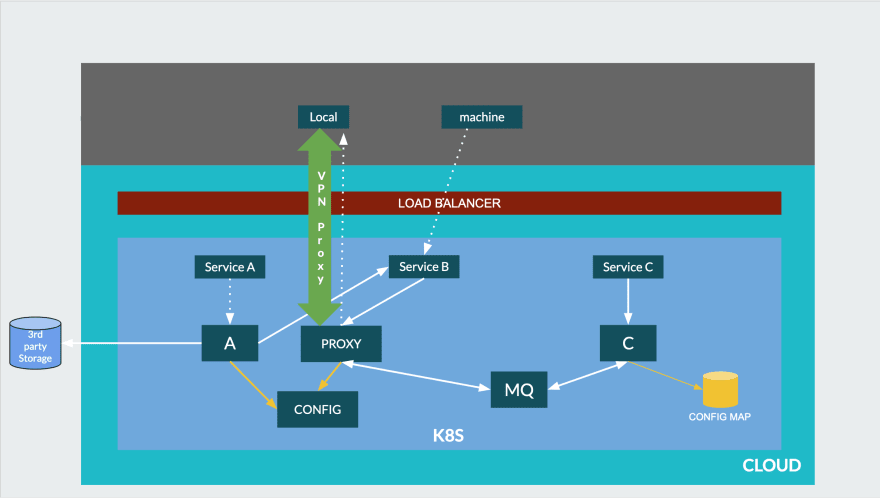 Telepresence proxies the environment variables and volumes and TCP connections to your machine. It intercepts DNS so DNS calls and TCP traffic are routed to the cluster through the proxy from your local machine.

Saves individual developer time by quick allowing them to testing their changes with the cluster services.

Helps the developers to locally test/debug and change the service.

It allows to make your local deployment be part of the cluster easily.

To verify you can simply open the terminal and run the telepresence command :

If you like my tutorial, you can buy me a coffee

Top reasons to build an app based on microservices in Node.js

How to Deploy Appsmith on private instance using Docker

Building a Search UI with Typesense

Shanker
I ❤️ technology. I create tutorials in UI and backend technologies and talk tech in general.If you like my tutorials you can buy me a coffee -> https://www.buymeacoffee.com/sn04
What was your win this week?
#discuss #weeklyretro
How are you using Styled Components?
#react #webdev #discuss #css
From Docker to Docker compose way!
#devops #docker #beginners