What is the first technology that comes to your mind when you think about Frontend development? Most likely the answer is JavaScript - one of the leading programming languages on the IT-market today. JavaScript has always been one of the most loved technologies among web developers and, since it has so many admirers, no wonder that IT-enthusiasts all over the world has created so many JS-based tools, frameworks and libraries to optimize the language, and make the web development coding experience smoother and less headache-causing.

Today we would like to talk about the 2 perhaps most popular JS-based technologies for creating interfaces - React and Angular. There are tons of requests on Google considering which is the best option for frontend development nowadays. First of all, let’s start with the fact that comparing React and Angular is a little bit unfair, since React is a library, while Angular is a full-fledged framework. However these are both significant technologies among providers of web application development services.

Anyway, the question is still open, so let’s find out which one is better to utilize in your next web project. So, React is a library (!) for building user interfaces, released in 2013 by Facebook; Angular, on the other side, is a framework, released 3 years later in 2016 by Google. Angular is written in TypeScript (which, in its turn, is based on JavaScript), and is nothing but a complete rewrite of the older AngularJS that was released in 2010.

Let’s compare the demand on the market for the React and Angular developers, using the statistics on the number of published vacancies on 5 popular international resources: LinkedIn, Indeed, Dice, AngelList and SimplyHired. 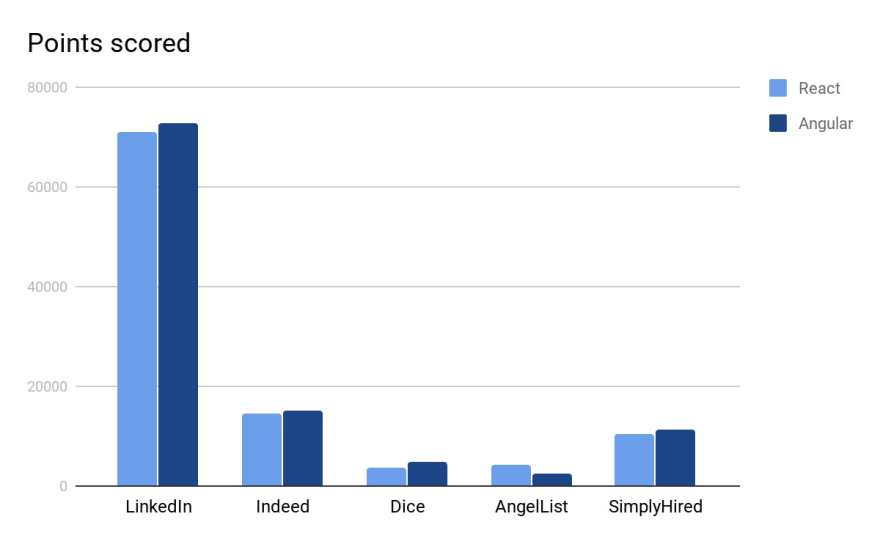 As you can see, the gap between React and Angular is not that significant. The website “The state of JavaScript”, based on its own research, made a conclusion about the Angular’s fall for the last 2 years.

And now let’s look at what people think based on several information resources:

We can make a conclusion, that Angular development is not really wanted among real people that use it in their work, while React is much more warmly welcomed among web developers.

Performance.
First of all, React uses Virtual DOM (Document Object Model), Angular utilizes Regular DOM. What does it mean? It means, that React wins, because having a Virtual DOM helps a lot to improve the overall speed, performance of an application and the user’s experience. However, this is relevant only for huge systems that deals with hundreds of data requests per one page. In smaller applications it doesn’t almost make any difference;

Library vs Framework.
The fact that one of these web application development technologies is a library, and another is a framework implies tangible differences. Angular as a framework has a strict structure and rules, however, being a framework also means that Angular gives more functionality opportunities out-of-box, which can’t be said about React since it is a library. For example, with React you can’t work properly with state management, for this you need to add another library, e.g. Redux or MobX. Or, to process http-requests you will either need to go native using JavaScript or ask for help from an instrument called Axios. With Angular, all of the above can be easily done from within the framework itself without any 3rd-party libraries, other frameworks, etc.;

Freedom and creativity.
Nevertheless, although Angular gives you more functional opportunities, it gives you less freedom and agility in ways to implement this functionality, which is a complete vice versa in case of using React. And it actually is a double-edged sword. Yes, React gives you more space for creativity, but the more extravagant you get with React, the more easily things can go wrong. Just for example, if you use independent libraries along with React, you have to take care of all the updates for each of them, and nobody can guarantee you complete interoperability. Angular, on the other hand, has very little flexibility, so you have to stick to its rules;

Best for new-comers.
The Angular’s learning curve is much steeper, since it is written in TypeScript, which is a statically typed language. The entry barrier to Angular’s world is higher, since there are hundreds of concepts to learn. However, once you’ve learned it, you will have more knowledge and a complete full-fledged framework’s powers on your side. JavaScript, that React is based on, on the contrary, is a dynamically typed language, it is much easier to learn. Moreover, dynamically typed languages require less time to write code and, again, provide web developers with more freedom. Anyway, React is much better for newbies;

Stability.
Experienced Angular developers complain that the framework is changing too much, forcing to review and rewrite almost the whole code nearly every six months. Consequently, Angular past knowledge simply becomes irrelevant. Every update is dreaded by developers, because they have no idea what major changes are coming next;

Mobile development opportunities.
Probably you all heard about React Native - a React-based framework that enables to create amazing mobile apps both for iOS and Android, almost indistinguishable from native applications. React Native has made a great name and gained a lot of popularity over the last couple of years. By the way, if you are interested in learning more about cross-platform mobile app development with React Native, we have an article here. And what about Angular? Well...there is a “nice” thing called Ionic - a framework based on Cordova, and, if you have been reading our article attentively, you should remember that Cordova is the most hated framework ever :) I guess, no more explanations needed.

Finally, we would like to point out that the technology you choose will mostly influence the speed of the web application development process. Both Angular and React have their own peculiarities that you should take into consideration when choosing a technology for a web project. The main points of the article are:

To be precise, there is no right or wrong decision. In our opinion, the choice mainly depends on the time you have for creating a project. If you want to save time, use React; if you don’t want to risk failing due to extensive amount of creativity and too many other libraries and frameworks in your project - take the strict and fully-equipped Angular.

One way or another, Smartym Pro has perennial proven experience in both Angular and React, and our fronted experts are able to offer you a free-of-charge consultation on which one is better for your particular project and why, and will provide you with full cycle development from scratch via the chosen library or framework. Don’t hesitate to contact us for any sort of help.

I’m the CTO at software development company and a technical expert with more than 10 years of experience. Interested in blockchain, AI, Big Data, and cybersecurity solutions.

Building Linkable Tabs with only CSS

Sergey V.
I’m the CTO at software development company and a technical expert with more than 10 years of experience. Interested in blockchain, AI, Big Data, and cybersecurity solutions.
What is the difference between state, province and city?
#discuss #help
What are some examples of open-source projects with great READMEs?
#discuss #webdev #opensource #codenewbie
Am I the only one who pronounces git as 'jit'?
#watercooler #discuss