In this post, I'm sharing my recent experience and project insights, from its story to SMM, and marketing actions. "Grab n'go CSS editor" having a series of weekly successes starting with Hacker News at the end of March to this day with "product of the day" on Product Hunt.

Grab n'go CSS editor is at least 6 years old project in terms of idea. The oldest record in git dated 13 July 2016, this is the official day zero for us.

Release v0.1 was implemented on a mix of Laravel (yes! PHP), jQuery, and Bootstrap. For me, it was one of the first steps in web development, and that time skeuomorphism was the dominant web design trend. As a consequence, I was in pain from rounding all those corners. And I went out knowing that knowledge is in practice. Made it as a fun side project with only one purpose to visually tinker with border-radius until the desired result achieved and generate CSS code.

Release v1.0 was on the same Laravel stack, and got many features, like shadows, which were quite popular properties due to skeuomorphism as well.

On 13 July 2016, I refactored codebase from ground zero using Meteor.js and Blaze. It's written initially with:

Between 2016 and 2020, I enhanced website and updated codebase as technology shifts; for example, next transition steps happened:

I have weekly marketing routine, and part of it posting news on Hacker News. Three weeks ago — 6 hours after posting news about CSS editor, I got 3.000 new visits by unique users. By the end of the day, more than 10.000 unique users visited CSS editor.

That moment I decided that it's finally time to again refactor its UI, fix reported bugs, and add features mentioned by folks in the discussion on Hacker News.

The same day when the link went viral on Hacker News, I released minor version v3.5 as a hotfix to critical issues and bugs. A week later, I released major release v4.0. The version you can find online right now is v4.3. As you see, the tool is organically growing and evolving. I encourage you to join the discussion, request features you're missing and leave general feedback, what's on your mind? Let me know.

From my single experience, upvoted post on Hacker News drive ten times more traffic. Maybe it has to do something with a day of the week. But if you think where to put focus — I recommend Hacker News. Product Hunt, on the other hand, has a stronger community and involved members.

I did nothing special to achieve it #1 product of the day. I posted CSS editor on Product Hunt on 13 April 2020, and only 5 days later, when I already thought the launch wasn't that successful, it got on the first place. I did my daily marketing routine and focused on updating posts and threads with project news and demos. In my strategy, consistency was a critical ingredient. Consistency is not an opening, but a good reminder. Whatever you do — don't give up!

I'm very proud and honored to work on something that can make CSS less painful and can serve a day-to-use use as a tool for learning, and help save time. Please share your feedback. Missing a CSS feature? — Tell me in the comments. 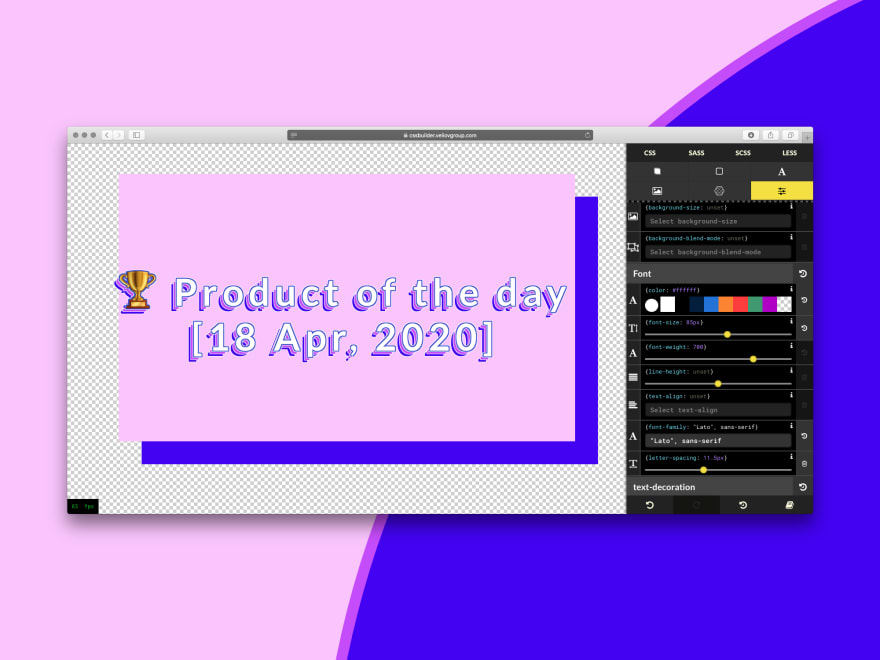