What are Micro Frontends?

With most of the current state of development of a web application, we generally see that it's a feature-rich and powerful application, and it's called a Single Page App or SPA. These types of applications are made using a single frontend framework or library like Angular, React, etc.

But over time, as we see all around, the application in itself grows more in many features and complexity and, in turn, can be challenging to maintain, especially when a separate team develops it. This is what we call a monolith approach.

On the other hand, we have the approach to using Micro Frontend architectures. Simply put,

Micro Frontends are a pattern where web applications User Interfaces (UIs) or a frontend are composed of independent or semi-independent fragments that can be built by different teams using different technologies or tech stacks.

It's an architectural style of building more robust web apps where independently deliverable frontends are composed into a more significant whole unit. These micro frontends extend the ability to make web applications as separate parts of a whole, right from the database all the way up to the raw HTML.

Benefits and Challenges to Micro Frontends

Recently, "micro frontends" has become a buzzword in tech, and for the right reasons, it changes the way developers think about web application development architectures.

In this section, we will deal with what benefits you get by using micro frontends and what are some of the disadvantages or challenges that it faces today in real-world apps.

Some of the top benefits on why you should choose them are:

These are the five challenges to keep in mind:

With the rise of micro frontends, we also see that many solutions are coming up to tackle particular challenges, as discussed above.

Some of these solutions give you smart build-time integrations of components, and some provide you with dynamically imported code from another app. In this section, let's take a look at three of the major solutions we currently have for micro frontends:

A JavaScript router for frontend microservices.

It is a framework for bringing together multiple JavaScript micro frontends in a frontend application and is mostly concerned about cross-framework components. This means you use multiple frameworks, like React, Angular, Ember, etc., on the same page without refreshing the page.

It applies a lifecycle to every application. In this, each app responds to URL routing events and must know how to mount/unmount itself from the DOM. Single SPA is best suitable if you want to put together different frontends/frameworks into one DOM to integrate at runtime.

2) Module Federation: this is built on the principle that:

Multiple separate builds should form a single application. These different builds should not have dependencies on each other, so they can be developed and deployed individually.

Generally, Module Federation only takes care of dependency sharing and is heavily tooling dependent. For example, once you're downloading a React component, your app will not import the React code twice once it's loaded, and it will use the source you already downloaded and then only import the component code.

The above two frameworks we saw are strongly coupled, i.e., you cannot disable the micro frontend, and then you also get feature overlap where one micro frontend depends on a specific version of another.

3) Piral: Piral is a framework for next-gen portal applications.

It allows you to quickly build web apps that follow the micro frontends architecture.

Piral takes care of everything you need in order to create distributed web applications with the flexibility and modularized structure of a microservice backend.

It helps you to create a modular frontend application extended at runtimes and comes with decoupled modules called 'pilets.' A pilet can be used to:

Piral's application shell is called a Piral instance, which:

Here, Piral differs from the other two in the list as it is loosely coupled and lets you always deploy your micro frontend without depending on another micro frontend. It doesn't matter if it's always there; apps made with Piral always work.

Creating your first application with Piral

Getting started with Piral is actually quite smooth and easy. The documentation page has all the steps. Besides the option of starting with an app shell that holds together all micro frontends we can also directly start with micro frontend development for an existing app shell.

The team behind Piral created some ready-to-use app shells. One of these is the "sample-piral" app shell. Starting development for a micro frontend for this app requires only npm and Node.js. In the command line of a new directory run:

Remark: In order versions of npm (6) the forwarding dashes (--) can be left out.

Now the pilet should be ready. Let's have a look at the code. The most important file is the src/index.tsx. Here, everything comes together. Let's change the original code from the following:

to only expose a page that is made visible via a link:

In the code we are - besides the setup function itself - not using anything custom. Using Link and React.lazy are familiar to any developer of React. This is the basic philosophy behind Piral. Pilets should just use the concepts of the underlying frameworks. Therefore, no meta router like in single-spa is required. The only new concept is that components now need to be registered where / how they should be used.

The code for the page is in src/Page.tsx. It reads:

The page is actually quite simple in its logic. But looking closely you see that we also placed one special element in there. The provided piral prop refers back to the API that allowed us to register pages and more earlier on. Now we can use the same API to create an extension slot.

An extension slot is a construct that is quite similar to what web components can offer. Let's say we have the following HTML code:

If some script is loaded that does a call to customElements.define with an element "x-important-info" then something will be shown. Otherwise, the spot may just remain empty.

Unfortunately, web components have quite a few downsides which make them less ideal for such placeholders:

Nevertheless, to actually illustrate what an extension slot is web components provide a useful model.

which will - under the hood - run pilet debug. The browser will show a page like this:

For testing purposes we can also fill the placeholder spot. To do that we can actually register an extension ourselves in the src/index.tsx. Change it to be:

The browser should update automatically. The page now looks like this:

Great! So how do you bring such a micro frontend online? There are multiple ways, but the most straight forward way may be to use the official Piral Cloud feed service. This service is free for personal development purposes. You can just log in via an existing Microsoft account at https://feed.piral.cloud.

When clicking on "Create Feed" you can enter a new (unique) feed name and some details. 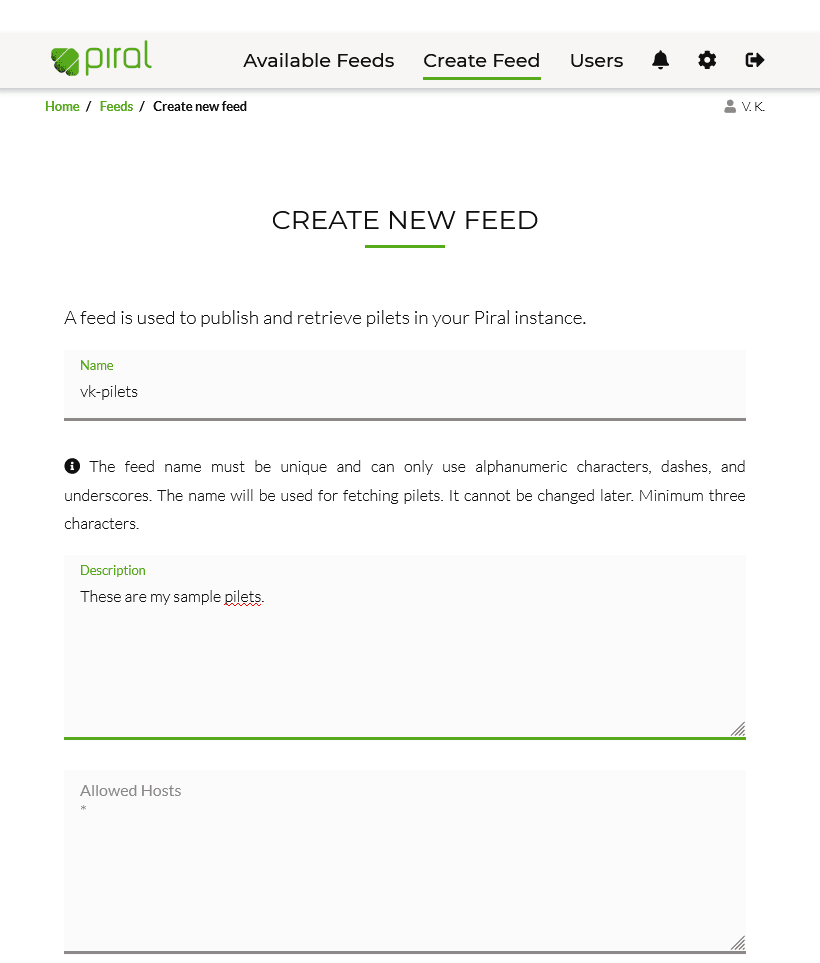 Now click create and finally you are on a page where the current pilets are shown. Right now we have none. 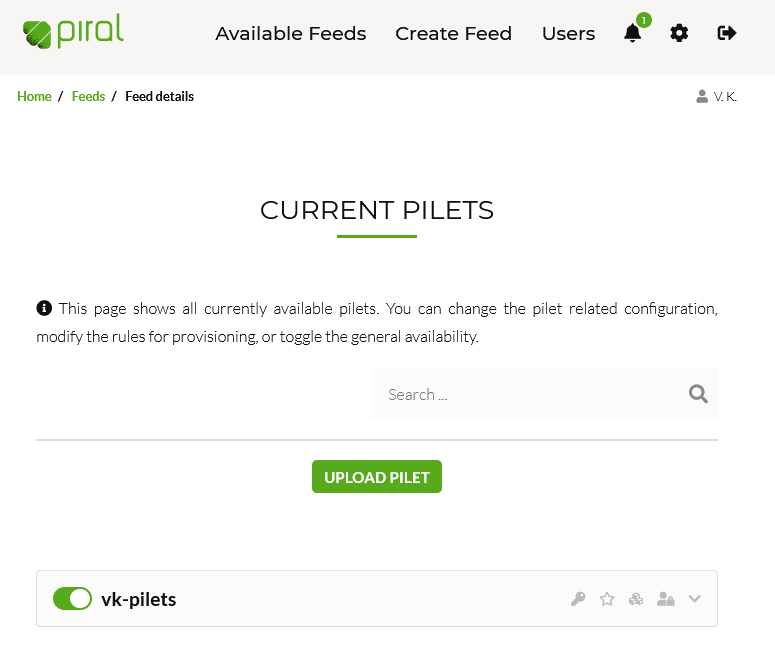 We can now either create an API key and publish the pilet from the command line, or we just upload the pilet via the web interface. Let's automate this right away by clicking on the symbol ("Manage API keys"), then clicking the button "Generate API Key". 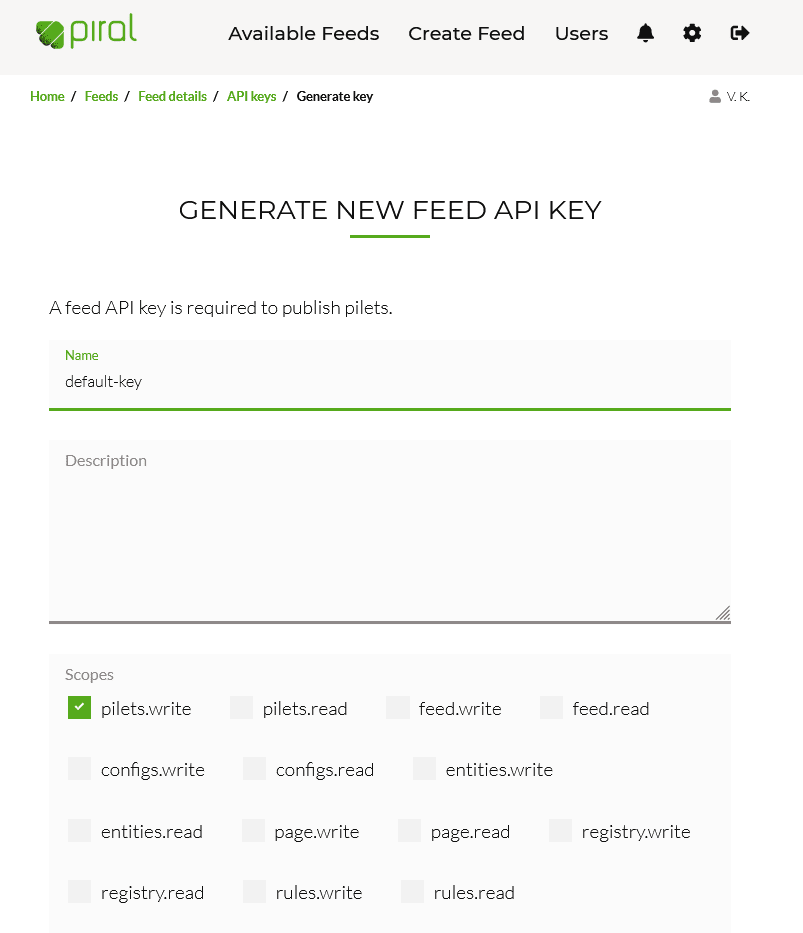 Give the key a name, but leave the rest as is. The default scope ("pilets.write") is sufficient. Then click on "generate". Click on the generated key to copy it.

On the command line run from the pilet's directory:

where the copied-key part should be replaced by the key you copied. The feed-url must be replaced with the URL from your feed. In my case the command looked like:

The portal should auto update and now list the pilet:

Wonderful - you've just published your first micro frontend. But how can you use it? After all, we don't have any page online. One thing we can do here is to just clone the repository of Piral - where the sample-piral app shell is developed. However, this is rather cumbersome and not great. The other thing is to just scaffold a new app shell and point it to the current feed.

In a new directory run:

Once installed open the src/index.tsx in your text editor and change

where the specific URL is the one you used to publish your pilet earlier. Now run npm start on the command line.

Even though the overall design is different we still get an entry in the menu (though looking a bit different, of course). And most importantly we still have the page. With this in mind let's stop the debugging, create and publish a second pilet, and see both coming together.

In a new directory, run again the npm init command for a pilet. Again, we can choose the sample-piral as app shell for trying / debugging the pilet. Change the src/index.tsx to be:

Just a simple counter - not more. We only use this example to demonstrate how easy it is to bring interactive components from one thing to another. This component is actually lazy loaded in its position. So it will only be made available when some slot would demand it, which is great for performance reasons.

Once published we can go back and look at the aggregation of both micro frontends in the same view:

Even without running our own shell we could debug both together. The piral-cli supports running multiple micro frontends at once. From the first pilet run:

where you can replace the names of the two folders with the paths you gave your pilets.

Congratulations! You just created two pilets that are capable of running in different app shells and bring features to each other without depending on each other.

In this article guide, we learned all about micro frontends in detail. We started by introducing you to micro frontends, how they differ from traditional SPAs and what problems they solve. Then, we stated a few of its benefits and challenges regarding how good it is with its independent iterative approach and how payloads and environment differences still pose a challenge.

Next, we compared different approaches to micro frontends briefly. We finally saw how to create your first app with Piral using the Piral Feed Service.

Once suspended, smapiot will not be able to comment or publish posts until their suspension is removed.

Once unsuspended, smapiot will be able to comment and publish posts again.

Once unpublished, all posts by smapiot will become hidden and only accessible to themselves.

If smapiot is not suspended, they can still re-publish their posts from their dashboard.

Thanks for keeping DEV Community 👩‍💻👨‍💻 safe. Here is what you can do to flag smapiot:

Unflagging smapiot will restore default visibility to their posts.