I’ve been playing with JS bundlers for several years. Still convinced of the necessity of using these tools (don’t let me believe that you don’t package your JS modules in production 😅), I played a lot with webpack. Especially for performance, optimization and custom plugins usage issues.

I still think that in 2021, webpack is the most industrial and successful solution to bundle my web applications. I hear that tools like parcel and rollup are still good alternatives. However, webpack probably has the biggest community and is used by many projects.

But let’s face it, today we are satisfied with these bundling tools despite their poor performance. I work every day on a project with several thousands of “modules” solved by webpack and it is sometimes a pain 🥱.

Despite an intensive use of cache and workers, webpack shows some limitations to package large applications.

Why does esbuild look interesting ?

I can’t think of an easier way to express it than to explain it to you simply:

The first time I ran esbuild on my test web app, I thought it crashed when in fact it ran at an absolutely insane speed.

To install it, it’s not complicated:

Or even with NPX

Being written in Go, a WASM version and binaries for the main architectures are available.esbuild bets on native Go to take advantage of a maximum of parallelization solutions and a better memory management.

A lean API by design

Globally the API of esbuild is really simple, in 30 minutes you have read all the docs of possible settings. This is far from the 3-4 hours needed to read the whole documentation of a webpack for example. In spite of a configuration that might seem limited, I am still pleasantly surprised. I have the impression that we are really close to having the “right grammar” that we need to do bundling.

In my opinion, the CLI is still very practical for testing things, but in a more “industrial” use, we still prefer the JS or GO format.

Evan Wallace the creator and core maintainer of esbuild makes no secret of the fact that he doesn’t want his tool to meet 100% of the needs that one can have in the web world. However, this doesn’t mean that we can’t use this tool in specific cases.

As we can see with other bundlers, esbuild offers the mechanics of plugins that allow you to do many things. To avoid maintaining all these specific needs, the creator relies on the community to create all the plugins you could want. And clearly, the community is there, I let you see this page that lists some plugins.

The most interesting features

I’m not going to list here the features that seem to me the heart of a Web bundler like code splitting, injection, minification. However, I was surprised by some features that are not found elsewhere.

An easy to understand architecture

Clearly, what makes the strength of esbuild compared to its competitors is its architecture which can be summarized simply. It is easy to understand that by combining the parallelization of the build steps and the reduction of the number of readings of the AST. I invite you to read more explanations in the doc. 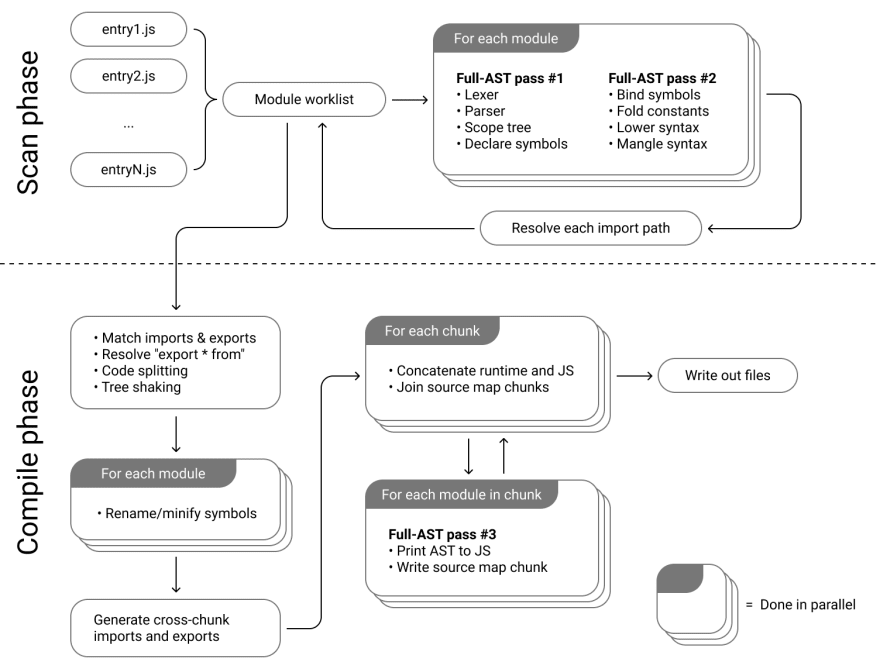 By default esbuild allows you to define the target of your build. What level of javascript do you want to achieve?

Usually we use a suite of tools like @babel/preset-env and a browserlist to make sure we generate the JS compatible with our targeting. Babel is great, I use it every day, but piling up different tools for bundling is clearly not a good solution in my eyes. It adds a lot of complexity:

esbuild is so fast that it can afford to expose you an HTTP server on a folder that contains the result of your compilation on each request. Other tools usually rely on a watch mode that watches for files that change to start a build.

The watch mode also exists with esbuild, but the serve mode seems to me even nicer because you just have to refresh your browser to have the latest version of your application locally.

But then we stop everything and go on it?

Let’s save time, the answer for me is clearly no.

As the creator says in the FAQ of the doc in all honesty, the project is not to be considered as being in alpha. However, the tool itself does not yet have all the features that would make it a good replacement for the previous generation bundlers. I’m thinking in particular of the absence of native HMR, or of a perfectible splitting code.

However, one should not remain closed on this question. Clearly esbuild has very strong points that are missing in the current ecosystem. The community, still in its infancy, is rather active and the exchanges in the Issues and PR of the repo are very interesting.

What I really appreciate in this project are the parts taken: a focus on performance, an API that remains simple. Finally, for once a bundler doesn’t have 1000 dependencies and add 100Mb in my node_modules folder, it’s nice enough to note.

I’ll finish by saying that esbuild is not the only alternative that is offered to us in this new generation of bundler. I intend to do this kind of analysis on tools like Vite or Snowpack.