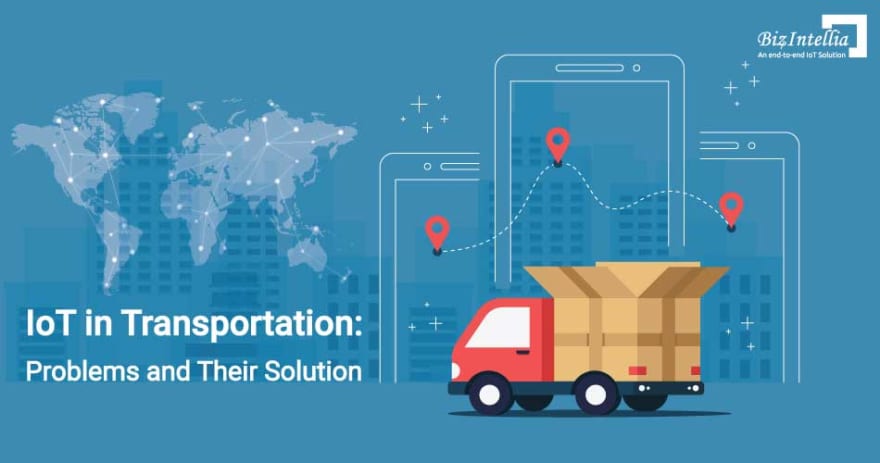 Internet of Things has been increasingly used in almost every industry and Transportation is no more an exception. Because people have been through a lot of problems and challenges while they travel from one place to another, a complete integrated solution was always a necessity. Many organizations developed the products to eradicate the problems but they did not come up as a sustainable solution.

It is important to realize that people do not buy any product or technology for their problem, they buy a solution to a problem. And so what IoT holds.

Let’s see how IoT has given a solution to the problems faced by consumers:

1. The traditional transportation system reduced the operational efficiency of the trucks-

The trucking industry forms a major portion of the global economy. According to the American Trucking Association, more than 70% of the freight tonnage is carried throughout the United States by trucks trailers taking goods from manufacturing plants to warehouses to retail stores. In fact, in some areas, the number is even higher. China transports 75% of its freight with the help of trucks and nearly 3/4th of all freight transportation is done via trucks in European Union Countries. With so much dependency on trucks and trailers, it is very much important that a company manages the fleet very efficiently such that low cost and high productivity is encountered. In the US, for example, it is reported that supply chain it a great demand but the increasing challenges and complexities are turning the pressure even higher. The traditional trucking system required different fluids to run properly but the leakage problem brought many issues like loss of air conditioning, overheated engine and many more which later on decreased the operational efficiency of the vehicles.

Adopting cutting edges digital technologies like IoT smart transportation, fleet management and many more can unlock seamless opportunities and productivity gains. In the past recent years, IoT has eradicated all the issues and improved the entire process with real-time information of the vehicle, driver behavior, and trailer information. By implementing IoT in Transportation, poor operational efficiency is no more a challenge. Whenever there is a fuel leakage or pilferage, an alert is sent to the respective manager. IoT sensors allow monitoring the vehicle performance by analyzing data, thus increasing the operational efficiency. Internet of Things has changed the face of the transportation industry, thereby adding bringing a dramatic change in the day to day operations.

2. The consumption of energy was increasing and congestion problems start arising-

Every year the United States uses 28% of its total energy to move goods and people from one place to another. The transportation sector includes many ways of transportation like personal vehicles to trucks to public transportation. The traditional transportation system used to consume a lot of energy for efficient routing management. But with the help of the Internet of Things, an optimized and efficient route can be decided thus consuming energy and saving time. Not only this, an approx. of 175 grams of carbon emission produced by the vehicles was eliminated. Traditional GPS technology involved tracking time and physical location, thus consuming more energy and not giving the desired outputs. IoT devices monitor real-time driver behavior such as which route drives take, driver’s braking habits etc. The traditional transportation system consumed a lot of energy during the route management but adoption of IoT into the traditional transportation system eradicated these problems. IoT sensors do not involve manual monitoring anymore thus reducing the consumption of energy. With time and modifications, manual monitoring became tough. IoT enabled temperature, pressure, heat and humidity sensors utilized energy in a very efficient way and adding great value to the business.

One of the major challenges of public transit was to get the real-time location about the vehicle and to know when it will arrive at a particular stop. Internet of Things allows tracking the real-time location of the vehicle. Districts install the GPS system on their vehicles (connected by the internet). This GPS data is sent further central command center. Once the data is received by the central command center, the data and information are sent further to the passenger’s internet enabled device. Hence, passengers can know the real-time information of the vehicle.

Not only this, many unforeseen/unexpected events such as climatic conditions, road closures, traffic jam etc. disrupt the public transportation system. Internet of Things has a unique feature which eradicates this problem. The implementation of IoT in Public Transit enables to re-route or find an optimized route, thus helping passengers to make alternate arrangements. Passengers receive real-time alerts notifying about the next stop or any other route taken. IoT has enabled the better transit systems thus developing a sustainable plan for the unforeseen circumstances.

Almost everybody loves to feel special. Personal information about passengers like where the person is, which route the passenger frequently takes, person’s travel habits etc. have been taken care of with the help of IoT. Internet of Things has enabled to send personalized travel information to passengers.

The traditional transportation system, especially the overloaded ones used to put a lot of strain on the road thus impacting the infrastructure cost very much. So, a complete check on the vehicle's information like weight, size, goods being transported, type of vehicle etc. was a major necessity. Through IoT and smart devices, a check on the weight of the vehicles during loading and unloading became a reality. Overloaded vehicles would then be identified and thereby damage to roads and infrastructure got reduced. Real-time alerts after analyzing the massive amount of data can be received thus decisions can be taken well before in advance and greater efficiency too.

Governments have transformed their roads by using integrated IoT solution and using advanced analytics for better optimization of road management. As road management has leveraged IoT at its best, cities have become smarter now. Thereby giving a better and healthy life to the citizens. In fact, better road management has been treated as a science which provides critical data and providing efficient improvement across the cities.

5. No advance alerts and unavailability of parking slots-

Whether you drive into the city by your personal vehicle or by using public transportation, finding a roadside or public parking spot was always a challenge. Unfortunately, with the ever-increasing population and vehicles, the issue became serious. One of the recent studies says that U.S. motorists spend 17 hours on an average and about $97 per year searching for places to park. Internet of Things eradicated this issue and developed a cost-effective smart parking solution. IoT integrated system has not only made the parking hassle free but also reduced pollution.

What does this mean?
Ultimately, the goal is to understand the consumer's problems and create a product that can give them a solution. So start by understanding the needs of the consumer and provide them with the solution rather than a technology.

Rock the IoT world with JavaScript and Espruino

Getting Started with MQTT

The Internet of Dogs: How to Build a $50 IoT Dog Collar That Locates Your Pet

Akash Soni
Akash Soni is the Digital Marketing Manager at Biz4intellia Inc, responsible for leading Biz4Intellia’s global digital strategy and operations. Being a DMM enthusiastic from the beginning of its prof
A Simplified Insight Into How IoT Works
#iot #iotworking
Harness the Power of IoT in Transportation Industry
#iot #iotinfographics #iotsolutions
6 IoT Business Solutions for Oil and Gas {Infographics}
#infographics #iot #internetofthings #iotsolutions