This tutorial explains how to create an executable command file in MAC OS. MAC commands executable / batch file consisting of commands to run (an alternate to .bat file of windowsOS in MacOC).

If you have worked on windows command prompt, you might used .bat or batch file which will have all the commands that you want to run, and when you double click on the .bat file, commands will be executed one by one.

In MacOS you can create a new file with file extension / format as .command and enter all the commands you want to run as you run manually on MAC terminal. 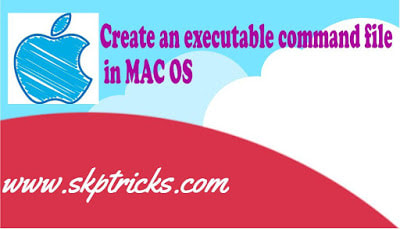 Welcome to skptricks, I have written and developed this site so that Learner may learn computer science related technologies and various programming ...

Explore Some Critical Areas Of The Uber-Like Business Model!

How to create our own browser?

skptricks
Welcome to skptricks, I have written and developed this site so that Learner may learn computer science related technologies and various programming ...
How to Prevent System from Locking of the Workstation Using Registry
#vbscript
VB Script To Keep Unlock Your Windows Machine
#vbscript