It's true that matplotlib is a fantastic visualizing tool in Python. But it's also true that tweaking details in matplotlib is a real pain. You may easily lose hours to find out how to change a small part of your plot. Sometimes you even don't know the name of the part, which makes googling it harder. Even if you find a hint on Stack Overflow, you may spend another couple of hours to make it fit your case. These non-rewarding tasks can be avoided by knowing what a figure in matplotlib consists of and what you can do with them. Like most of you, I think, I have overcome my plotting problems by reading lots of answers by matplotlib gurus on Stack Overflow. Recently, I noticed that an official tutorial about Artist objects is very informative and helpful to understand what is going on when we plot with matplotlib and to reduce a large amount of time spent for tweaking1. In this post, I would like to share some basic knowledge about Artist objects in matplotlib which would prevent you from spending hours for tweaking.

I'm not going to write about how-tos like "do like this when you want to do this", but a basic concept of Artist in matplotlib which helps you choose suitable search queries and arrange a solution for a similar problem as yours. After reading this, you'll probably understand those huge amount of recipes on the Internet more clearly. This also applies to those who use seaborn and plotting features of pandas which are wrappers of matplotlib.

plt.show() is omitted in this article because I use Jupyter notebook's inline plot.

Two plotting styles you should be aware of

Before looking into Artist objects, I would like to mention the difference between plt.plot and ax.plot, or Pyplot and object-oriented API. While object-oriented API style is officially recommended, there are still lots of examples and code snippets using Pyplot style, including official docs. Some are even mixing both styles meaninglessly, which causes unnecessary confusion for beginners. Since official doc has good notes about them such as A note on the Object-Oriented API vs Pyplot and Coding Styles, here I only make some comments on them. If you look for introduction for them, I recommend official tutorials.

This is the recommended style which often starts with fig, ax = plt.subplots() or other equivalents followed by ax.plot, ax.imshow etc. fig and ax are, in fact, Artists. Here are some simplest examples.

Some tutorials use fig = plt.gcf() and ax = plt.gca(). These should be used when you switch from Pyplot interface to OO interface, but some Pyplot-based codes include, for example, pointless ax = plt.gca() which is apparently copied from OO-based code without understanding. Using plt.gcf() or plt.gca() isn't a bad thing at all if one switch the interface intentionally. Considering implicit switching can be a cause of confusion for beginners, using plt.subplots or fig.add_subplot from the beginning would be the best practice for most of the cases if they are publicly available.

This is a MATLAB-user-friendly style in which everything is done with plt.***. 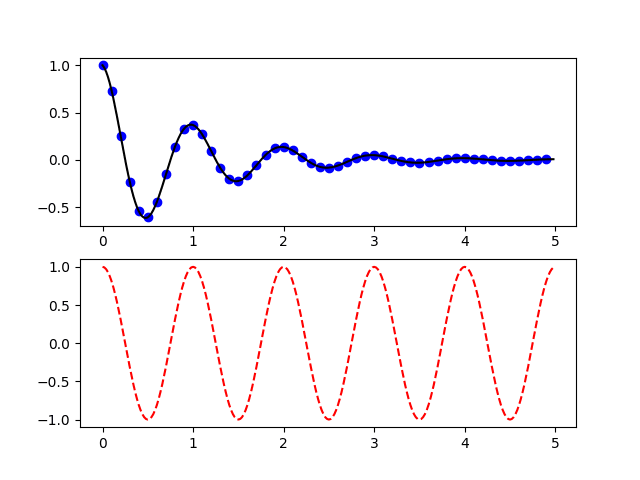 At first, it seems very simple because there is no need to think about which objects you are handling. You only need to know which "state" you are in, which is why this style is also called "stateful interface". Here, a "state" means which figure and subplot you are currently in. As you see in Pyplot tutorial, it gives a nice figure if your plot is not so complicated. Although Pyplot interface offers lots of functions to change plot settings, you may reach its limit within a couple of hours, days, months (or never if you are lucky enough) depending on what you want to do. At this stage, you need to switch to OO interface. That is why I recommend to use OO interface from the beginning. But Pyplot is still useful for quick checks or any occasions where you need rough plots.

The hierarchy in matplotlib

After googling several times, you will notice that matplotlib has a hierarchical structure consisting of something often called fig and ax. Old doc for matplotlib 1.5 has a nice image explaining this. 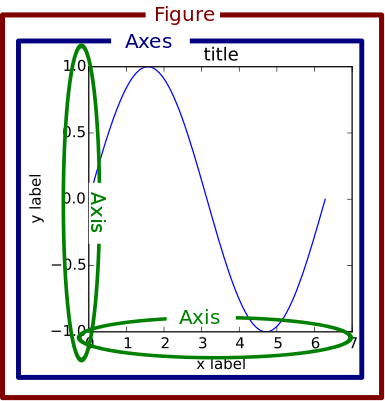 Actually, these three components are special Artists called "containers" (and there is the fourth container Tick) which we will see later. This hierarchy makes simple examples above even clearer.

Taking a further look at attributes of fig and ax helps you understand the hierarchy more.

From these results, we can expect following rules about the hierarchy of Figure, Axes, and Axis.

Everything in your plot is an Artist

Instead of a figure explaining the hierarchical structure, Usage Guide in the current doc has "Anatomy of a figure"2 explaining all components in a figure which is also informative3. 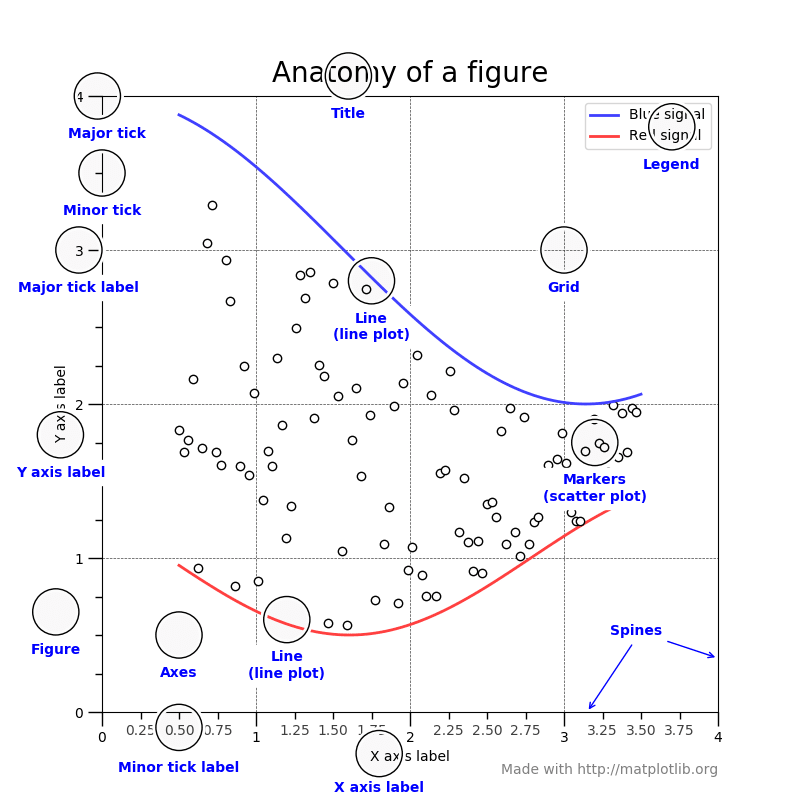 From lines and points which represent data to minor ticks and text labels for them on X axis, every single component in a figure is an Artist object4. There are two types of Artist, containers and primitives. As I wrote in the previous section, three components in matplotlib's hierarchy, Figure, Axes, and Axis are containers which can contain lower containers and multiple primitives such as Line2D made by ax.plot, PathCollection by ax.scatter, or Text by ax.annotate. Even tick lines and labels are in fact Line2D and Text which belong to the fourth container Tick. 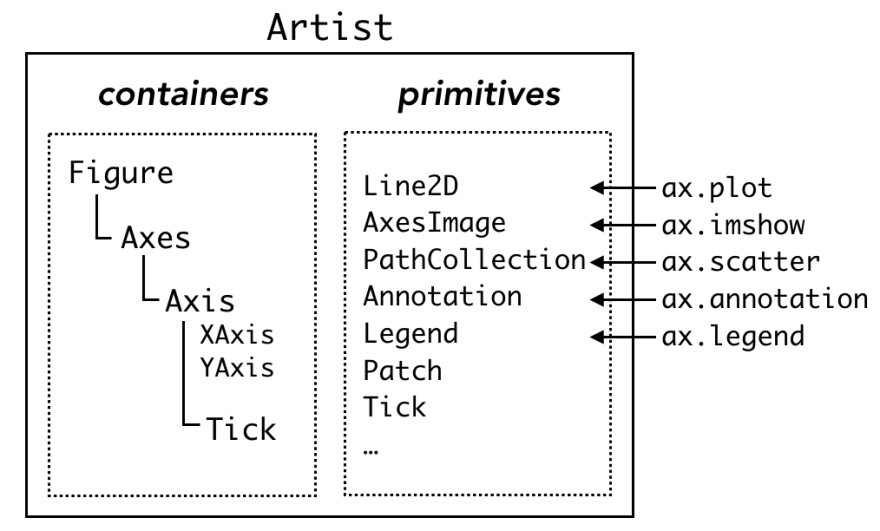 Containers have many "boxes" (Python lists, technicaly) for each type of primitives. For example, an Axes object, ax, just after instantation has an empty list ax.lines. Frequently-used command ax.plot adds a Line2D object in the list and does other accompanying settings silently. 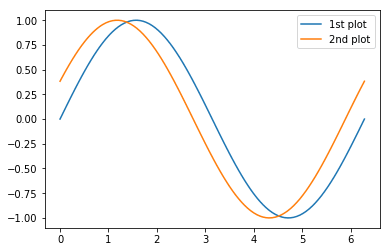 Attributes with a plural name are lists and those with a singular name represent a single object. It is worth noting that Artists belonging to Figure use Figure coordinate by default. This can be converted to Axes or data coordinates by using Transforms, which is outside the scope of this post.

fig.legends is a "box" for legends added by fig.lenged method. You may think "What's that for? We have ax.legend." The difference is a scope of each method. While ax.legend only collects labels from Artists belonging to ax, fig.legend gathers labels from all Axes under fig. This is useful, for instance, when you make a plot using ax.twinx. Simply using ax.legend twice makes two legends, which is not desirable in general. 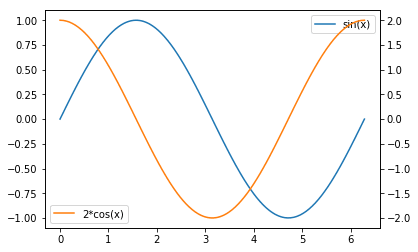 A famous recipe to put them together is to combine legend handlers and labels of both Axes. 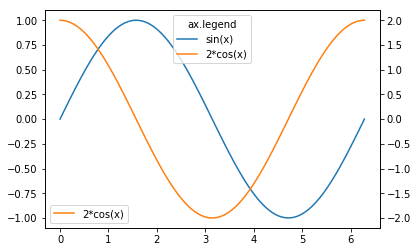 This can be easily done by fig.legend without arguments which was introduced in ver 2.15. By default, the position is specified with Figure coordinate which is not useful when you want to put it in a plotting frame. You can change it to Axes coordinate with bbox_transform keyword. 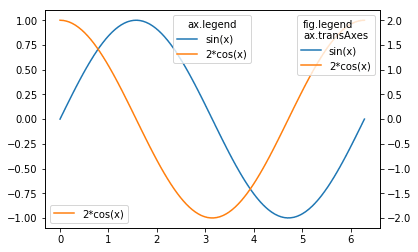 This is a quote from Artist tutorial. This is very true because important parts of data visualization in matplotlib all come from Axes methods.

Frequently-used commands such as ax.plot and ax.scatter are called "helper methods" which add corresponding Artists in appropriate containers and do other miscellaneous jobs. 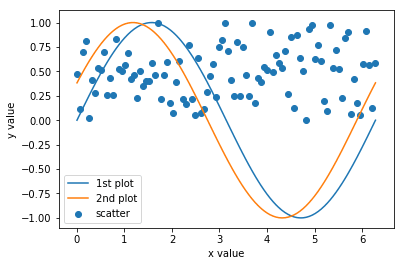 Reusing a plotted object is not recommended

After knowing that plotted objects are contained in lists, you probably come up with an idea to reuse those objects in an Axes.lines by appending it to another Axes.lines list for faster plotting. Artist tutorial clearly states this is not recommended because helper methods do many things other than creating an Artist. A quick test tells this is not a good idea. 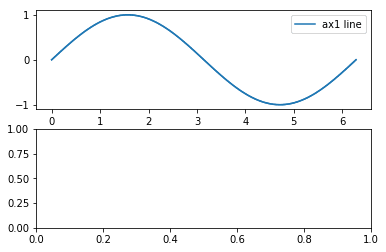 This error message indicates that an Artist, container or primitive, cannot be contained in multiple containers, which is consistent with the fact that each Artist holds the parent container as a bare object, not in a list.

It might be possible if you do all the necessary stuff in a proper way, but this is far from the first idea to just append an object to a list and is enough reason not to do it.

While Axis, appeared as XAxis or YAxis, only contains Artists related to ticks and labels, it often requires some googling for minor tweaking, occasionally for an hour. I hope this section helps you get the job done quick.

As Artist tutorial doesn't have a table like other containers, I made a similar table.

We used ax.set_xlabel and ax.set_ylabel in the example for Axes container. You might think these methods change X and Y label of Axes instance (ax), but in fact they change label attributes of XAxis and YAxis, ax.xaxis.label and ax.yaxis.label, respectively.

Axes has many "set_***" helper methods to modify attributes and values of Axis and Tick instances. They are so handy that a large portion of problems matplotlib beginners encounter can be solved with some of them. It's worth noting that these "set_***" methods are static. Changes made with them are not updated when something changed. For example, if you change X ticks with ax.set_xticks to make them look nice with the first plot and the second plot exceeds the X range of the first plot, the result doesn't look like what it should be. 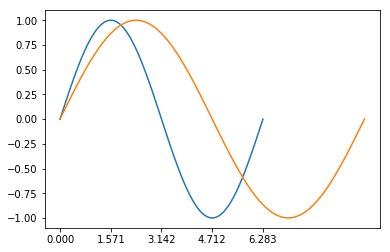 Ticker does it for you

If you don't change tick-related settings with "set_***" methods, ticks and tick labels are automatically updated for each new plot accordingly. This is done by Ticker, more specifically, formatter and locator. Although they are quite essential for tick-related settings, you might know little about them if you have solved your problems by copying and pasting Stack Overflow answers6. Let's see what's going on in the previous example.

Let's change Ticker in the previous example instead of ax.set_xticks. 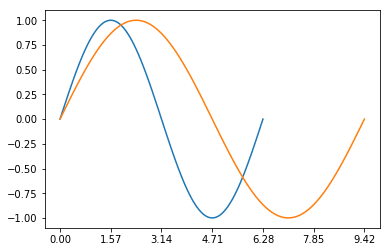 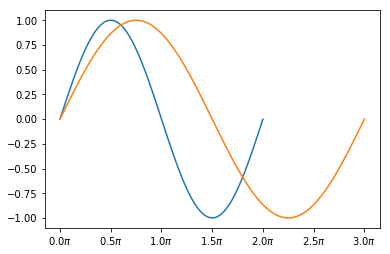 Well, there might still be something you would like to tweak, but I guess it's clear enough.

For your information, ax.plot has xunits keyword which is not described in the doc for the moment. I have never tried to use this option, but you can see an example in Gallery > Radian ticks and learn more about matplotlib.units.ConversionInterface here. 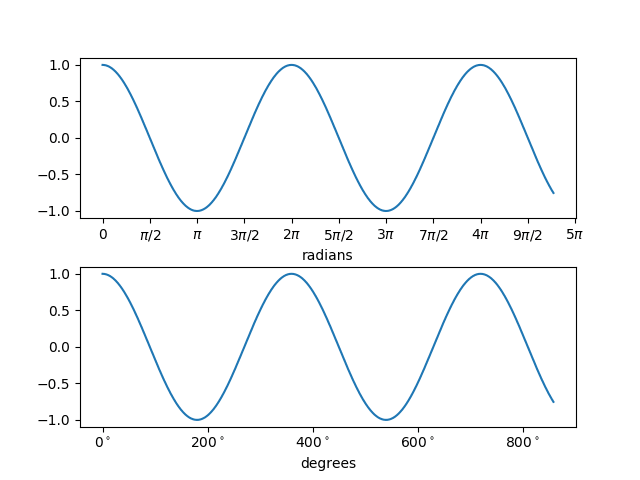 Finally, we reached at the bottom of the matplotlib hierarchy. Tick is a small container mainly for a short line for a tick itself and a text for a tick label.

As we see in Axis, Tick also appears as XTick or YTick. 1st and 2nd indicate ticks at lower and upper sides for XTick, and those at left and right sides for YTick. The latter ticks are not visible by default.

We hardly need to handle Tick directly thanks to many helper methods, Ticker, and Axes.tick_params.

It's time to custom your default style

Some of you might have negative impression on matplotlib's doc. I agree that it was hard to find an appropriate example for your problem from a long list. But it has been improved significantly since version 2.1.08. This is obvious if you compare corresponding pages before and after the improvement.

I recommend to take a look at the latest gallery and the tutorial which are now pretty neat.

Thanks for reading. Enjoy plotting with matplotlib (and googling) 📈🤗📊

Inverting A Binary Tree in JavaScript and Python

skotaro
A postdoc in materials science who tends to spend way too much time for making a proper figure for publication.
10 useful VS Code shortcuts you should know ()
#productivity #vscode #webdev #beginners
How to get back after failures in life?
#productivity #career #watercooler
New friend
#webdev #watercooler #discuss