I used to pay little attention to automated alerts before. Until I started to be On-Call regularly, that is. Such a powerful motivator! Few things sharpen your thoughts regarding Type I and Type II errors more than waking up at three in the morning due to a misconfigured alert.

Since then, I’ve written and spoken about alerting. You’d think there’s only so much so can say about the matter. Nothing further from the truth. It turns out it’s a riveting topic.

My newest obsession is multiwindow, multi-burn rate alerts. I’ve spent a lot of time trying to tune alerts to make my rotations less miserable when the answer was in front of me all along. Check out this post if you want to see how to provision them in DataDog, using Terraform.

That’s a lot of multis in one sentence. But hear me out. I recommend starting with Chapter five of the SRE handbook to get a comprehensive overview. As far as I know, that’s the first place that mentions it.

You’ll likely read it the first time and stare at it blankly. It happened to me, at least. It’s something to digest slowly, or it won’t make much sense. Go ahead, I don’t mind waiting.

That being said, this article isn’t about theory. I want to get into the how. I’m focusing on DataDog because it’s the monitoring system I’ve used the most lately.

After reading about burn rates, I tried to implement them in DataDog. Surprisingly, it didn’t seem possible when I started looking. I only found this talk from DevOps Austin to send me down the right path.

You can in fact simulate burn rates in DataDog. There’s a catch, though. DataDog doesn’t have an equivalent to the rate function in Prometheus. You don’t have a reliable way of assessing a metric within a specific time frame.

The rollup function is the closest alternative. Sadly, it’s fundamentally flawed. It evaluates once per window. Let’s say you use a burn rate with a thirty-minute window. With a rollup, the metric fails after the full window’s end. That, of course, won’t cut it if you have a critical issue ongoing. What a bummer.

I had given in to despair when I got the great news: There’s now built-in native support for burn rates. They’re in beta, but completely usable. And best of all, it’s available through the API.

I repeat it a lot, and I’m still not tired of saying it: Provision infrastructure with code. Alerting is infrastructure. If we click our way through the UI, whatever we conjure won’t be repeatable. So let’s get down to the code. I’m using my trusty tool Terraform. Any recent version of the provider will do the trick.

Let’s talk about the code that we need to build these alerts, bit by bit.

The whole thing starts by defining an SLO. You can use it in dashboards, but the good stuff comes when we combine the SLO with alerts associated with it.

This block is parametrized so that we can use it as part of a generic module:

Let’s instantiate one! We’re leveraging the standard Trace Application Metrics for Java here. If you instrument your application code with the dd agent you’ll have them. The most relevant parts in the next snippet are the numerator and denominator, which form the evaluation metric for the SLO:

SLO’s express a ratio of positive events. Our metrics gather total hits and errors, so we’ve got to invert the metric. It looks like this:

slo is the target percentage. For instance, it can be 99.9. Have a look here to get an idea of the meaning of the number of nines.

A side note: don’t forget to use as_count. The way it computes an aggregation of events is more intuitive.

SLOs have been part of DataDog for some time. Attaching a DataDog monitor to it is the new part. We’re about to do just that:

Focus on the query. We have the following elements:

We have two burn rates, a quick and a slow one. We’re following SRE’s advice for the parameters here:

Notice that we don’t need to adjust the burn rate based on the error rate. DataDog does that for us.

And that’s about it. If you provision this code, you’ll see an SLO like this one: 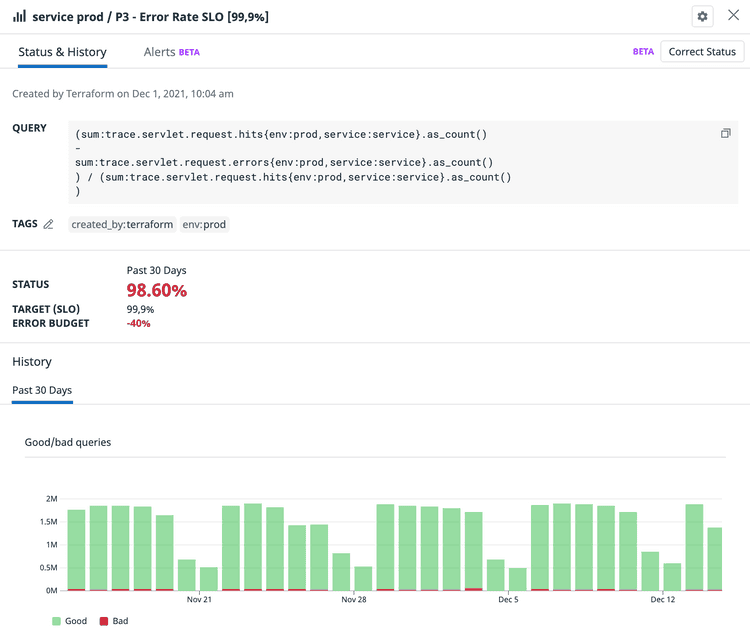 The SLO has two alerts attached to it, for our two burn rates. Unlike with rollup, they don’t need a full evaluation window to trigger. Exactly what we need!

An Alert That you Can Trust

Is all the hassle worth it? You bet it is. Since I’ve replaced our existing alerts with multiwindow, multi-burn rate alerts, I’ve spent close to zero time babysitting them. That’s a welcome change, compared to some of my previous attempts. It comes down to the yin and yang of alerting, false positives, and false negatives.

Having two (or more) windows is a good layer of defense against over-eager triggers. False positives are technically not a bad thing for the business side. I do focus on them a lot because they, in my experience, inevitably lead to slopiness. If you get bombarded with alerts, you’ll start taking them less seriously. Also, I firmly believe that developers willing to spend their time outside of work on-call deserve a decent setup.

The quick burn rate triggers fairly quickly in case of errors. Don’t worry, you won’t miss anything, especially if you have a tight SLO.

Moreover, the slow burn rate covers a scenario that often falls through the cracks. A slight increase in errors that persists for a longer period. Good luck tuning a regular alert to account for this without waking you up constantly. Luckily, if you follow this article you won’t have to do that. Listen to somebody that has spent a good chunk of time on-call, get those burn rates online!

Once suspended, sirech will not be able to comment or publish posts until their suspension is removed.

Once unsuspended, sirech will be able to comment and publish posts again.

Once unpublished, all posts by sirech will become hidden and only accessible to themselves.

If sirech is not suspended, they can still re-publish their posts from their dashboard.

Once unpublished, this post will become invisible to the public and only accessible to Mario Fernández.

Thanks for keeping DEV Community safe. Here is what you can do to flag sirech:

Unflagging sirech will restore default visibility to their posts.