A year and a half ago, a coworker sat down with me to elevate my terminal experience. It was a game-changer, because since then working without the efficient configuration I have setup on my work laptop turned discouraging quickly.

This became particularly relevant recently when the newfound time quarantine granted had me dusting off my personal laptop to begin some projects that were bubbling in my head for some time.

I hadn't approached my personal laptop from a developer lens in some time. The first thing I noticed? My terminal. My sad, default-state-appearing terminal. The time had come to revitalize the experience - I was far too accustomed to the short-cuts my coworker had installed for the terminal on my work laptop. But, that was a while back and I didn't have any documentation tracking all the changes they made. So, it was time for me to list all the conveniences I wanted to implement, and partake on a journey to configure Hyper from scratch.

I didn't even have Hyper to begin with. So I began by installing it here.

Next came what easily ranks highest amongst the priorities of the developer experience: Changing the colors. I went ahead and ran:

But running this sparked the first error of the journey:

I found a thread of responses to this error. For me, this response of three commands in particular fixed it.

I installed zsh, but then ran into an error displaying non-standard shell when trying to set it as my default shell.

The last answer here is what fixed it for me.

Then in my .bash-profile file I made bash switch to z-shell:

One of the handiest features from my work laptop's terminal experience is Spaceship prompt. This will update the default prompt terminal with information like what directory you're on, current branch, node version and more. Following this short tutorial helped get it working for me.

Next on the priority list was changing the font and adding ligatures. For this, I followed section 1.2.1 Font in this tutorial.

As for the font, in Mac it's as simple as downloading and installing the font families and then setting it as the font of choice in Hyper's config.

Note to self: when setting up ligatures, the tutorial says to add webGLRenderer: false, to the config as the last step but I didn't realize that line was already in there, so in actuality you're just updating the line, not adding it.

Setup some handy aliases in the ~/.zshrc file.

Two features I definitely wanted to transfer over were auto-suggestions and syntax highlighting. I went through a few tutorials (some of which are linked here) and nothing seemed to work. Until, this one saved the day.

I had forgotten I used antigen on my work laptop to make those two features work, which Level Up Coding's tutorial walked me through perfectly. 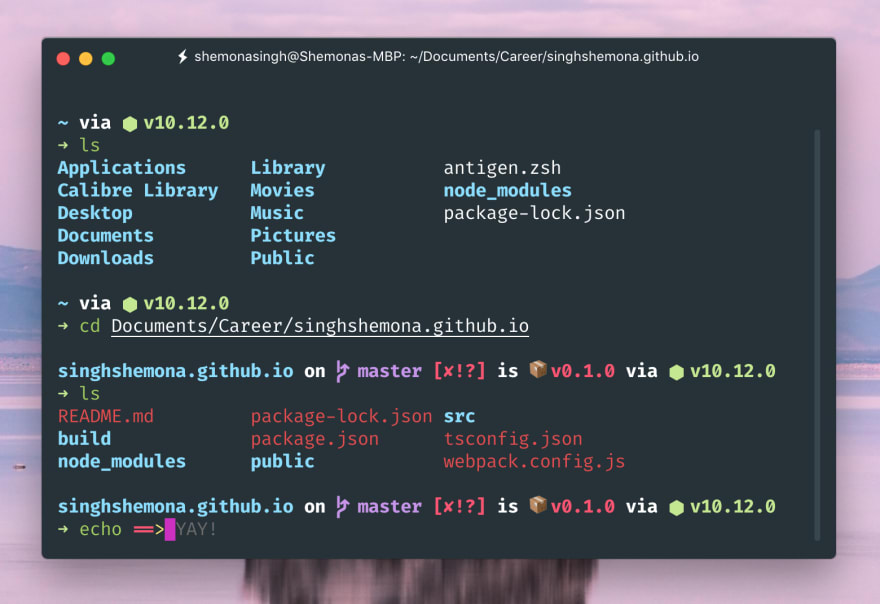 The next thing I'm looking to do is add folder and file icons when listing out directories. I've messed around with Color LS but it seems Fira Code is not compatible (icons don't show) and using Hack Nerd Font removes the ligatures. Looks like the terminal configuration journey continues...🤔

How to confige Elasticsearch in our local system

Shemona Singh
Interested in all things design and engineering.
My 7 Tips on How to Manage Stress as a Developer
#productivity #100daysofcode #codenewbie
Do you agree with intrusive time tracking software?
#career #remote #discuss #healthydebate
June 17th, 2021: What did you learn this week?
#weeklylearn #discuss #weeklyretro
Forem Open with the Forem app