Recently I have been using lit, a web component framework.

If you are not familiar with web components here is a quick summary:

Web Components is a suite of different technologies allowing you to create reusable custom elements - with their functionality encapsulated away from the rest of your code - and utilize them in your web apps.

Lit is a popular framework for these components with over 1 million weekly downloads. (Oct 10th 2022).

For how to test Lit Elements I had been following some big notable projects,

Cypress has become one of the most popular test runners in the space. So I was a little surprised to not see some guidance for it on the lit documentation. I think it's an ideal candidate for Web Component testing on modern browsers, and because it recently added support for safari it has great coverage across chromium, webkit, electron and quantum (firefox) based browsers.

To test with lit elements you will need a project with cypress.

The testing setup consists of writing a cy.mount command for mounting Lit Elements into the DOM.

And this means you can write test like this:

And just like that, you can run a cypress test for the component. Here is a quick snapshot of me testing one. 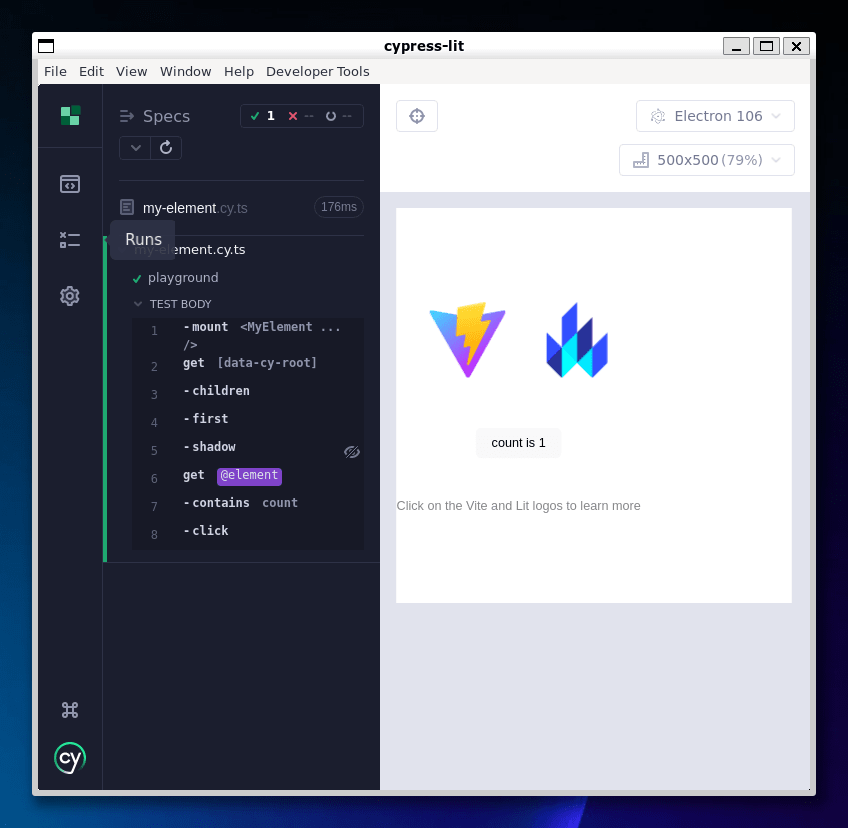 That is a quick example of how to run component tests for Lit with cypress. Hopefully it's just enough information for you to get it setup.

Since cypress components supports so many frameworks already, I don't think it will be long before an official lit component implementation lands. In the meantime, happy testing!

How to Install Shoelace with Rails 7, esbuild, and Tailwind JIT

Once suspended, simonireilly will not be able to comment or publish posts until their suspension is removed.

Once unsuspended, simonireilly will be able to comment and publish posts again.

Once unpublished, all posts by simonireilly will become hidden and only accessible to themselves.

If simonireilly is not suspended, they can still re-publish their posts from their dashboard.

Once unpublished, this post will become invisible to the public and only accessible to Simon.

Thanks for keeping DEV Community 👩‍💻👨‍💻 safe. Here is what you can do to flag simonireilly:

Unflagging simonireilly will restore default visibility to their posts.