Both Grafana Tempo and Jaeger are tools aimed at distributed tracing for microservice architecture. Jaeger was released as an open-source project by Uber in 2015, while Tempo is a newer product announced in October 2020.

Jaeger is a popular open-source tool that graduated as a project from Cloud Native Computing Foundation. Grafana Tempo is a high-volume distributed tracing tool deeply integrated with other open-source tools like Prometheus and Loki.

But before we dive into the details of Jaeger and Grafana Tempo, let's take a short detour to understand distributed tracing.

What is distributed tracing?

In the world of microservices, a user request travels through hundreds of services before serving a user what they need. To make a business scalable, engineering teams are responsible for particular services with no insight into how the system performs as a whole. And that's where distributed tracing comes into the picture.

User requests are broken down into spans.

Spans represent a single operation within a trace. Thus, it represents work done by a single service which can be broken down further depending on the use case.

Architecture of Jaeger and Grafana Tempo

Jaeger and Grafana Tempo are somewhat similar, with the only difference being in their backend storage.

Grafana Tempo was built to avoid the maintenance that is required to run databases like Cassandra and ElasticSearch. It has the following components in its architecture: 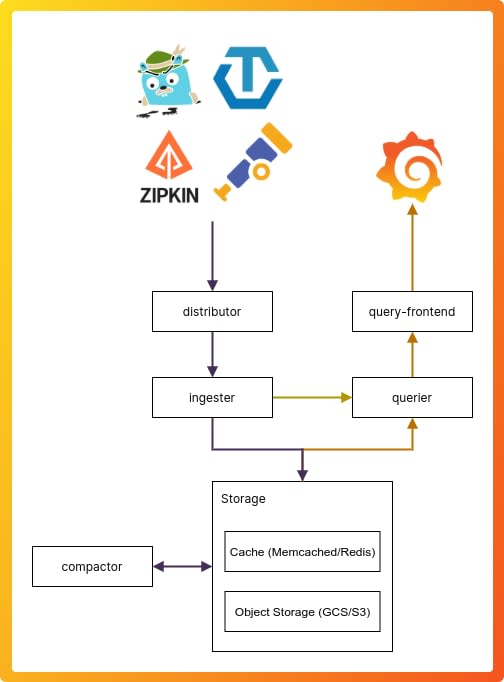 There are four major components to a distributed tracing tool:

Once the trace data is collected with the help of client libraries, it can be directly sent to the storage backends for storage and visualization. But it's a good practice to have a tracing pipeline for data buffering as the application scales. The pipeline enables receiving data in multiple formats, manipulation, batching, indexing, and queueing.

Jaeger provides Jaeger collectors, as seen in the architecture diagram. The collectors validate traces, index them and perform any transformation before storing the trace data.

Grafana Tempo has Grafana agents, which are deployed close to the application. It quickly offloads traces from the application and performs functions like trace batching and backend routing.

Grafana Tempo has its own custom TempoDB for storing trace data. TempoDB supports S3, GCS, Azure, local file systems, and optionally can use Memcached or Redis for increased query performance.

Jaeger's UI is basic but comprehensive when it comes to distributed tracing.

Both Jaeger and Grafana Tempo are strong contenders when it comes to a distributed tracing tool. But are traces enough to solve all performance issues of a modern distributed application? The answer is no. You also need metrics and a way to correlate metrics with traces within a single dashboard. You also need out-of-the-box data visualization that will enable engineering teams to resolve issues faster.

That's where SigNoz comes into the picture.

SigNoz is a full-stack open-source application performance monitoring and observability tool which can be used in place of Grafana Tempo and Jaeger. It provides advanced distributed tracing capabilities along with metrics under a single dashboard.

SigNoz is built to support OpenTelemetry natively. OpenTelemetry is becoming the world standard for generating and managing telemetry data (Logs, metrics, and traces). It also provides users flexibility in terms of storage. You can choose between ClickHouse or Kafka + Druid as your backend storage while installing SigNoz.

SigNoz comes with out of box visualization of things like RED metrics.

You can also use flamegraphs to visualize spans from your trace data. All of this comes out of the box with SigNoz.

Some of the things SigNoz can help you track:

You can check out SigNoz's GitHub repo here 👇

Error tracking and monitoring in Next.js

When you need Database per Service ?