Data-fetching is something I feel does not get the importance and limelight as say state management in the React world. People often combine client state and server state into their state management solution. By server state, I mean the data from your backend servers. For example, in a redux setup, client state and data from server are stored in stores and updates are handled through actions and reducers. Client state change usually causes a change in server state, so combining them makes sense in most cases. But I feel they are two separate entities and if handled properly, we can even get rid of client side state management solutions in some cases.

I started looking at solutions to separate client and server state management. Coming into the React world from an Angular background, I wanted something simple as storing your server data in a service and inject it into your components, and you're good to go. In React, you'd have to maintain a global state management solution if the data you're fetching is needed in multiple components.

I then looked at libraries which performs data fetching and maintain server state. I stumbled up react-query and boom! It had everything I needed and more. It provided a way of maintaining a global context of server state, and also provided an excellent caching solution with minimal configuration. There's also swr which is equally awesome.

Let's say we have a product entity. A product has all of CRUD operations attached to it. So, the following API calls need to be there in products

react-query provides us with a useQuery hook which we can use for all our queries. This should cover points 1 and 2 in the above list.
We'll create our own data-fetching hooks for product by wrapping useQuery.

Our product file in api/product.js looks something like this 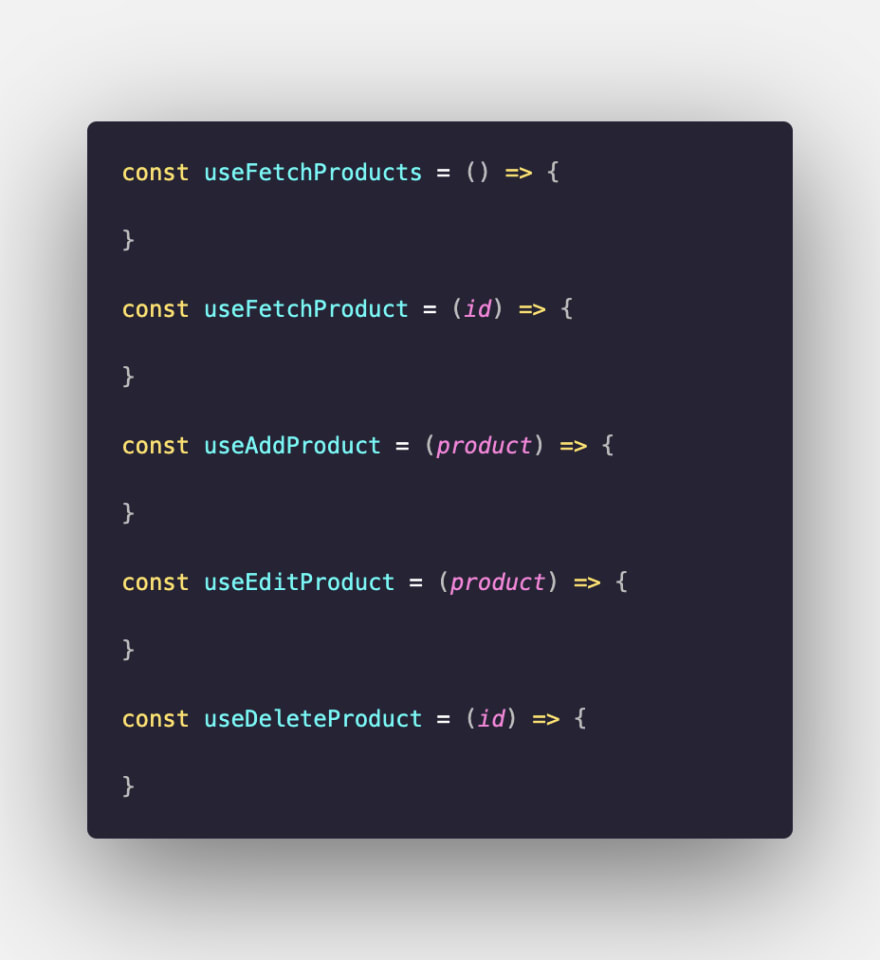 Let's go over how we setup functions for data-fetching with react-query.

Let's start with fetching products. The barebones implementation with useQuery would look like 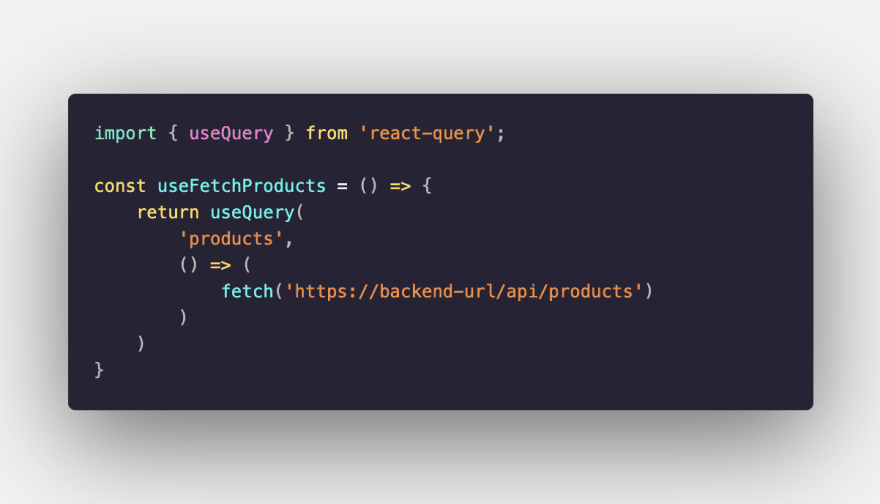 Not much going on here. We pass a unique id key as the first argument to useQuery and a fetch function to actually make the API call.

If we want to use this in a component, we can do so like 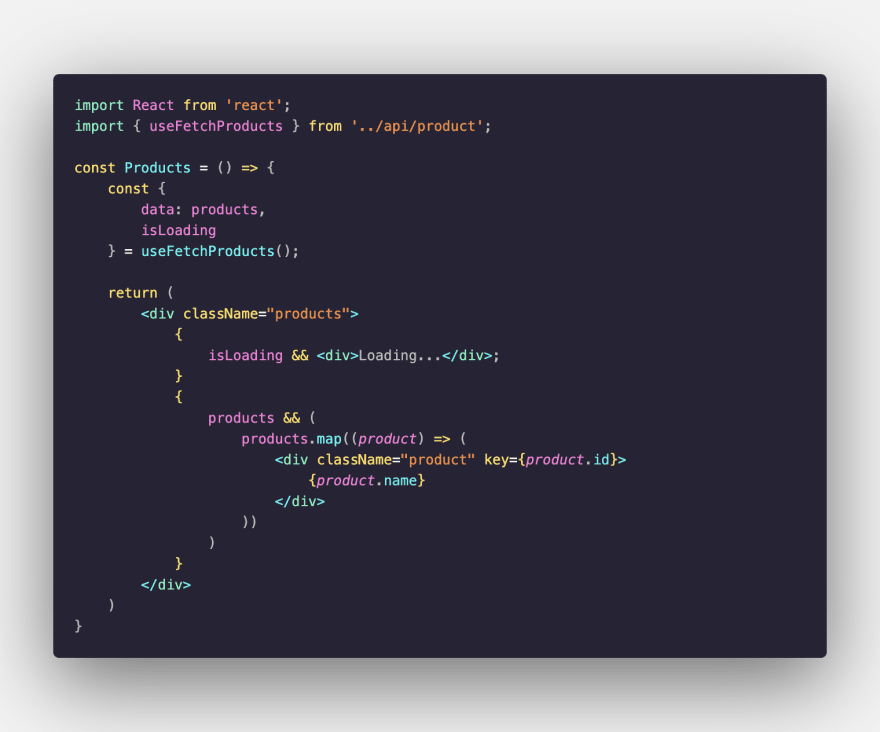 We have a working data-fetching setup, but the feature set doesn't end here. Any listing page would have additional features like search, filters, pagination etc. This is where react-query makes it really simple to add these. Let's set these things up.

In our Products component, we can have page and limit values as state. page denotes the current page number and limit denotes the number of products to be displayed on the page. 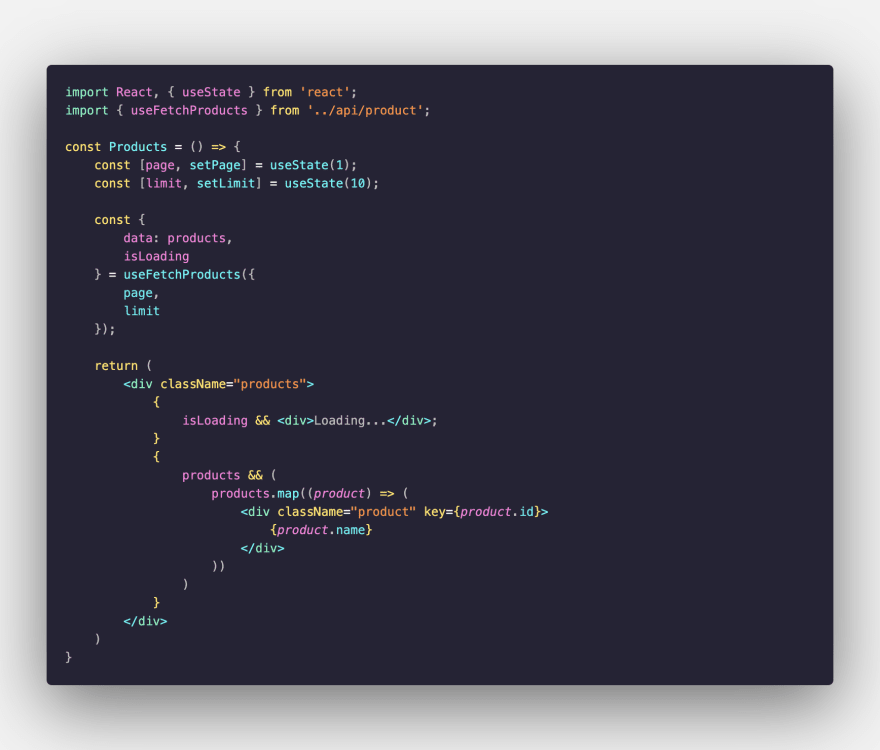 Let's unpack what's going on here. The useFetchProducts hook now takes in page and limit as arguments. It also adds these two to the key and adds them to the fetch URL.

Great! That's it. We now have our pagination implemented. Now, whenever the value of page and limit changes in our Products component, react-query would automatically fire the API request and update the UI.

Another important common feature is search. So, lets add a search on name field in products. As you might have guessed already, it is the exact same process as pagination. We'll have a name field in state, and this state value would be passed to our useFetchProducts hook. 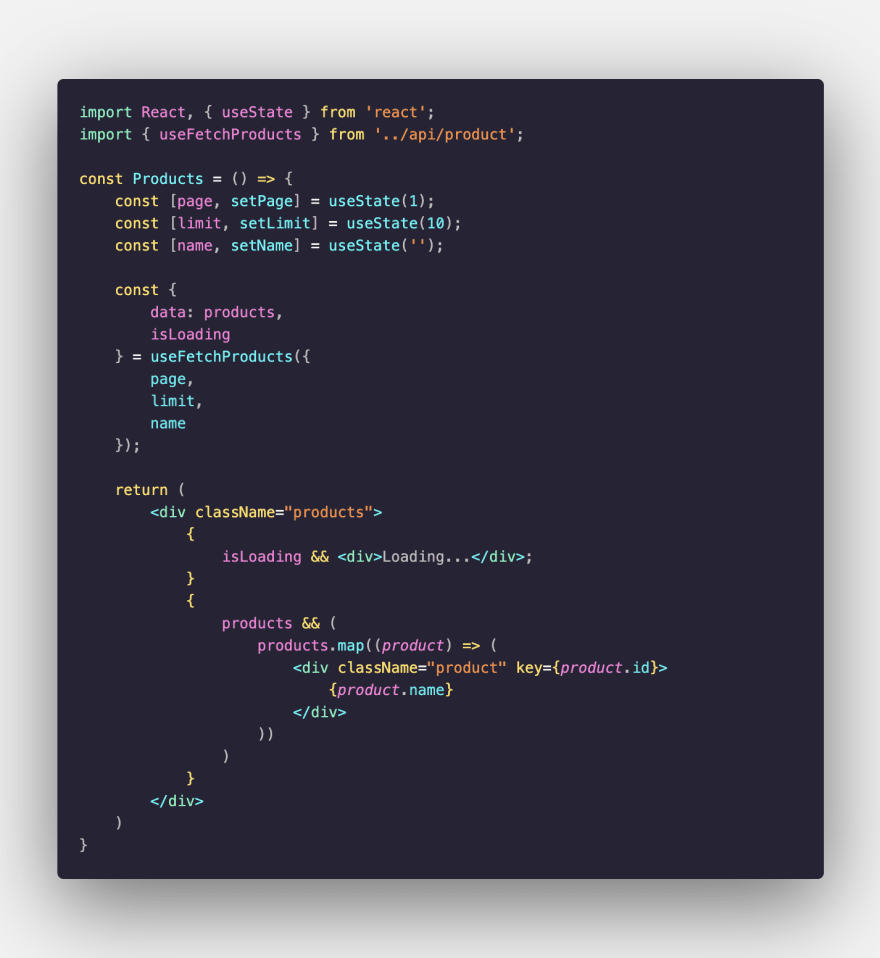 Similarly, we can hook any number of filtering/search parameters to out useFetchProducts hook. This hook can be used across multiple components without any global state management system.

Caching is hands-down my favourite feature of react-query. With minimal code, we can setup a powerful caching system. In the case of our products example, let's say we want our products to be cached for 10 seconds. We can do this by adding the staleTime option.

This would use the data from the cache whenever this hook is called with the same page, limit and name.

react-query also give us access to its internal cache. We can update this cache whenever we want. What this means is, we can set internal cache values of individual products. 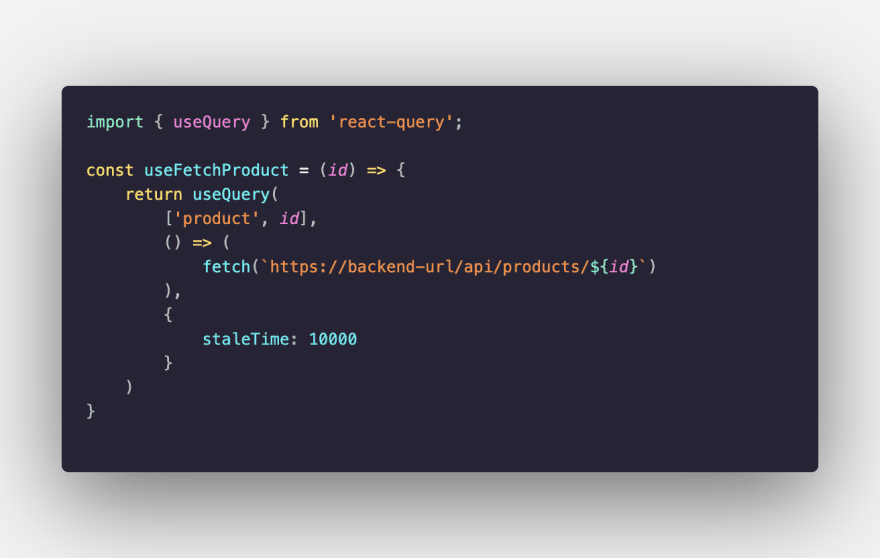 Nothing crazy going on here. Pretty much the same thing we did before, just that it take id as an argument.
The important thing to note here is ['product', id] as the key. We are associating a product's id as its key. 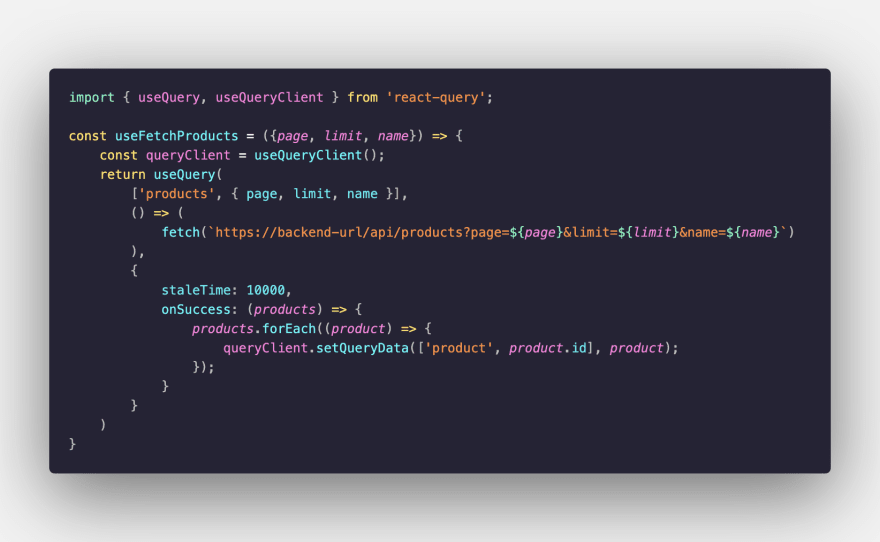 Whenever our list of products is successfully fetched, the onSuccess function is called which has the API response it. We loop through each product and store it in the cache using the setQueryData method.

Now, whenever the user moves to an individual product's page from the products list page, the value from the cache will be used rather than making an API call.

So, I found react-query to be extremely simple and powerful data-fetching solution. After using react-query, I even removed global state management solutions from some of my projects. Go give them some love on their repo