As most of you know I’m an Apple platforms Developer working in iOS, OSX, WatchOS applications and been in the industry for the past 5 years now. I have Handled, architected, designed and developed various kinds of projects and trained more than 30+ people. After researching the current market, here are a few thing I suggest if you are trying to become one like me.

Do your SWOT Analysis before getting into any tech. I did mine 5 years ago and never looked back.

To become an iOS Developer you must have 2 things before getting in.

A Macbook (Preferably Pro models)
Any iPhone Device (You can’t debug a few things in the simulator)
After this, you might have to gain some experience on the apple ecosystem. It would give you exposure to what you’re about to build in this space and what it should look like.

Coming to the major part now.

More than writing 100 lines I prefer pictographs, Here is an interesting roadmap design I saw and it's more accurate and i suggest following this. 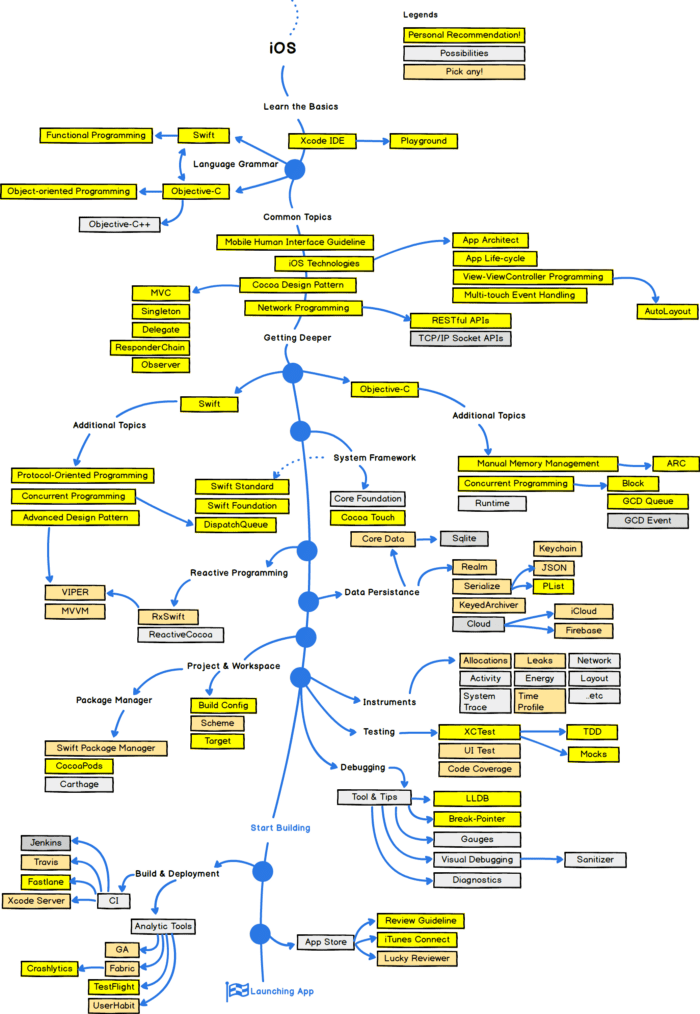 have a few recommendations on courses to join and people to follow for more guidance.

Remember, Take one day at a time.

What other things you can do to standout in crowd :

Learn to write Test-cases, I highly recommend TDD (Test Driven Development)
Specialise yourself in some libraries and frameworks (Can be any)
Build a niche portfolio with different kind of applications (E-Commerce, TicketBooking, social networking, pooling, etc.) .
Understand GIT and maintain a good git repo to exhibit your works.
Learn to use postman and Insomnia for API Testing.
Learn shortcuts of Xcode and terminal commands.
Languages:
Objective C, Swift are the programming language you would have to use it in native development.

For a beginner I would suggest to go with Swift rather than objectiveC.

Swift is a general-purpose, multi-paradigm, compiled programming language developed by Apple Inc. and the open-source community. Swift works with Apple’s Cocoa and Cocoa Touch frameworks, and a key aspect of Swift’s design was the ability to interoperate with the huge body of existing Objective-C code developed for Apple products over the previous decades. It is built with the open source LLVM compiler framework and has been included in Xcode since version 6, released in 2014. On Apple platforms, it uses the Objective-C runtime library, which allows C, Objective-C, C++ and Swift code to run within one program.

Swift is my favourite language out of all I used. You can use this docs some basics understanding on swift. Below are few things you have concentrate before building an application.

Why should you use Flutter?

Once suspended, shreethaanu will not be able to comment or publish posts until their suspension is removed.

Once unsuspended, shreethaanu will be able to comment and publish posts again.

Once unpublished, all posts by shreethaanu will become hidden and only accessible to themselves.

If shreethaanu is not suspended, they can still re-publish their posts from their dashboard.

Once unpublished, this post will become invisible to the public and only accessible to shreethaanu raveendran.

Thanks for keeping DEV Community safe. Here is what you can do to flag shreethaanu:

Unflagging shreethaanu will restore default visibility to their posts.