This article will take readers to understand how Dapper uses CommandBehavior to optimize query efficiency, and how to choose the correct Behavior at a specific time.

I have compiled the Behavior table corresponding to each method here:

First, you can see that each method uses CommandBehavior.SequentialAccess. The main function of this tag is to make the DataReader read rows and columns sequentially without buffering. After reading a column, it will be deleted from memory. It has the following advantages:

CommandBehavior.Default has the below behaviors:

These two features are much different from the production environment. After all, most of the time,only a set of result sets are needed with limited memory, so in addition to SequentialAccess, Dapper also uses CommandBehavior.SingleResult in most methods, so that only one set of results is required. To avoid wasting resources.

There is also a detailed processing of this paragraph. Looking at the source code, you can find that in addition to marking SingleResult, Dapper also specially adds code at the end while(reader.NextResult()){} instead of directly Return (such as the picture)

Earlier, I specifically posted an Issue (Link #1210) to ask author, here is the answer: mainly to avoid ignoring errors, such as when the DataReader is closed early.

Sometimes we will encounter a situation where select top 1 knows that only one row of data will be read. At this time, QueryFirst can be used. It uses CommandBehavior.SingleRow to avoid wasting resources and only read one row of data.

In addition, it can be found that in addition to while (reader.NextResult()){}, Dapper also has while (reader.Read()) {}, which is also to avoid ignoring errors. This is something that some companies’ self-make ORMs will ignore.

The difference between the two is that QuerySingle does not use CommandBehavior.SingleRow. As for why it is not used, it is because multiple rows of data are needed to determine whether the conditions are not met and an Exception is thrown to inform the user.

There is a particularly fun trick to learn in Dapper. The error handling directly uses the Exception corresponding to LINQ. For example: more than one line of data is wrong, use new int[2].Single(), so you don't need to maintain the Exception class separately, and you can also have more i18N language message. 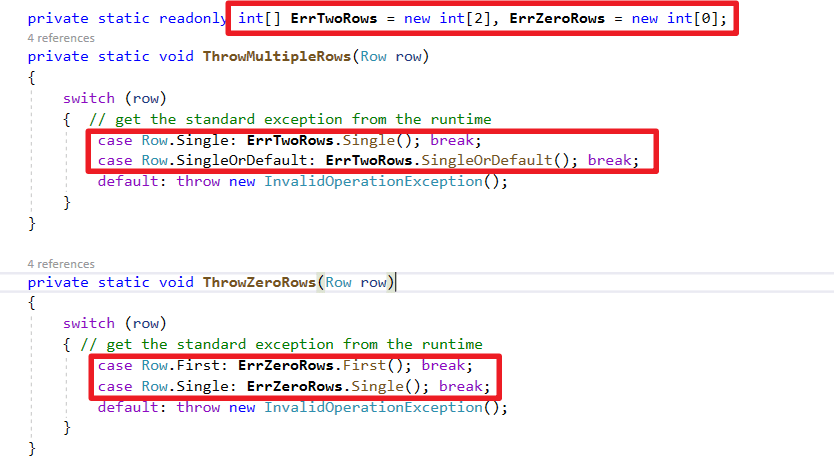 REST API with ASP.NET and MySQL

Once suspended, shps951023 will not be able to comment or publish posts until their suspension is removed.

Once unsuspended, shps951023 will be able to comment and publish posts again.

Once unpublished, all posts by shps951023 will become hidden and only accessible to themselves.

If shps951023 is not suspended, they can still re-publish their posts from their dashboard.

Once unpublished, this post will become invisible to the public and only accessible to Wei.

Unflagging shps951023 will restore default visibility to their posts.