A map is a data structure which maps values (keys) with other values.

In Javascript we can use an Object for this purpose.

Suppose we've to store student's marks, we can use an object for this purpose.

Although the first 2 results were expected, we certainly didn't expect the 3rd result as we didn't add any key with the name of 'toString' to our marks object.
But this is the downside of using an Object as a Map.
Along with the key-value pairs we define the plain object also derives properties from Object.prototype 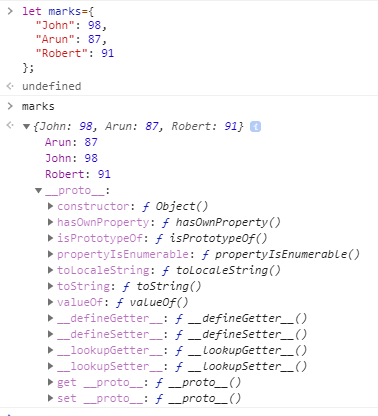 Hence using plain objects as maps could be dangerous. So suppose we want an object without it inheriting from Object.prototype, we can do this in many ways:
One of the way is to pass null to Object.create() method. In this way the resulting object will not derive from Object.prototype and can be safely used as a map.

Also if we're using a plain object as our map, we can avoid using in keyword for finding whether key is present in object or not; instead we can use hasOwnProperty() method which ignores the object's prototype.

There's another problem with using plain objects. It only accepts strings as it's keys. And if suppose we want suppose an object as a key, we cannot do this.

Don't worry, Javascript also provides us with Map class which is written for this exact purpose.
The methods set, get, and has are part of the interface of the Map object.

How tough is Freelancing?

Once suspended, shiv1998 will not be able to comment or publish posts until their suspension is removed.

Once unsuspended, shiv1998 will be able to comment and publish posts again.

Once unpublished, all posts by shiv1998 will become hidden and only accessible to themselves.

If shiv1998 is not suspended, they can still re-publish their posts from their dashboard.

Once unpublished, this post will become invisible to the public and only accessible to Shivaansh Agarwal.

Thanks for keeping DEV Community 👩‍💻👨‍💻 safe. Here is what you can do to flag shiv1998:

Unflagging shiv1998 will restore default visibility to their posts.