I've been quite busy this week so I don't have a standard post ready to go. Instead, I thought I'd write a little bit about my current setup and my posting "workflow".

Let's get the boring stuff out of the way first. I do the majority of my writing code and the accompanying posts on a Mac Book Air.

I use iTerm2 with ZSH and Oh My ZSH. It's not too customized though. I just stick with the default robbyrussell theme and a handful of useful plugins.

I don't have a fully customized dotfile repo since I have not really done too much in that direction. I did use some of "Mathias’s dotfiles" sensible Mac defaults though. Maybe I'll take a little time to dig through and see if I have anything worth sharing though. 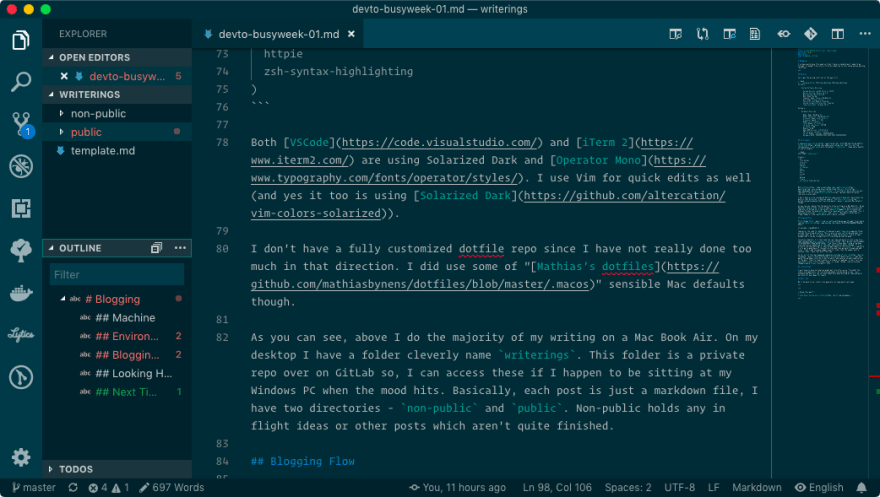 On the desktop, I have a folder cleverly name writerings. This folder is a private repo over on GitLab, so I can access these if I happen to be sitting at my Windows PC when the mood hits. Basically, each post is just a markdown file, I have two directories - non-public and public. Non-public holds any in-flight ideas or other posts which aren't quite finished.

First things first - music! I am currently working my way through "live" daily jams by Monotrail. #48 is probably my favorite so far.

I'm trying to learn as I go so I've tried to come up with smaller projects. My time for this is a bit more limited then I would like but what are you going to do. The code for whatever I'm going to post lives in a separate folder outside the writing directory. This folder is also version controlled and kept in a private repo. Once I have an idea in mind, I'll start with the most basic code. That becomes the basis for my first post in what makes up the overall Attempting to Learn Go series.

I'll then take the raw code and paste it into a new file that contains my markdown post template. From there I have been trying a top-down style basically commenting on the code, pointing out what's changed, if I've actually learned anything, or what we may expect in the future. I'll typically try to get a good base of the post written and then go back through and add links. I don't add too many images usually, other than the header mostly because I don't have that much free time.

So far all of this has happened completely outside of dev.to. Once I think everything is in a pretty good state I'll copy and paste the markdown into the v1 dev.to editor and save an unpublished version of the post. Then its time to give it a couple re-readings. I can't tell you how often I catch little things, typos, or larger things, like unfinished thoughts where I just trailed off into...

Once a post is up everything is checked into GitLab and the iteration process begins. Picking up from where we last were, I first decide if there is a feature or something that clearly needs fixing. My goal is to push the project a bit further along, enough that I can have another post but not too far that I'm skipping ahead. I have been fortunate enough to receive some very good feedback so I try to incorporate that both in the revised code and keep it in mind for new projects.

I am trying to plan out what we might get into after we've "finished" the static site generator. So I'm thinking about incorporating a real paper notebook and pen so I can jot down ideas both when working on code and posts but also for any ideas for topics.

There we go, a quick peek into how I've been writing my posts. We'll be back to our static site generator at some point next week!

I've been known to write some code from time to time.