But first, how does OWASP determine the top ten web application security risks? OWASP creates their web application risk list by using both data analysis and industry surveys. They use applications donated specifically for analysis to determine the data-driven portion of the list. Two of the top ten risks are decided by survey responses returned by members of the community. This process allows developers to highlight risks they often encounter that may not be reflected in the analyzed data.

What Are the OWASP Top 10 Web Application Security Risks?

The OWASP Top 10 Web Application Security Risks list has recently been updated. By comparing it to the previous version, released in 2017, developers can see longstanding problems plaguing software development along with newly recognized issues. 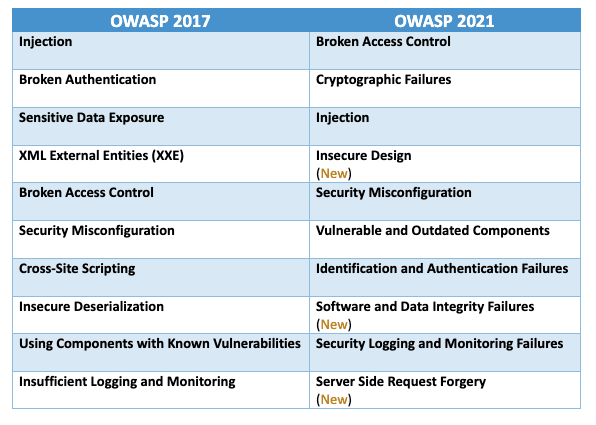 Injection risks describe the insertion of untrusted data to an interpreter as part of a command or query. This category includes SQL, NoSQL, OS, and LDAP injections among others. Malicious injections seek to subvert interpreters into executing harmful commands or revealing sensitive data. This risk category now includes cross-site scripting, which had its own entry in the 2017 list. One way to prevent injection vulnerabilities is by keeping data separate from queries and commands.

Broken authentication, as the name suggests, occurs when poorly implemented session management creates opportunities for attackers to take over user accounts. Threat actors who break authentication or other session management functions may gain access to passwords, keys, or session tokens. They may also be able to seize legitimate user identities and exploit those as well. This risk category became part of Identification and Authentication Failures in the 2021 version of the OWASP list.

Sensitive data can be exposed by applications or APIs that do not have adequate built-in protections. For strong security, it is important to provide protective measures for data in transit or at rest. Sensitive data is a valuable commodity for threat actors, making data security particularly important. Stolen data may be monetized through committing fraud, blackmail, identity-related crimes, or sold on the dark web. In the 2021 list this category was merged into cryptographic failures.

XML Eternal Entities (XXE) risks describe vulnerabilities that allow the exploitation of XML processors to commit DDOS attacks or perform other malicious activity. Deprecated or misconfigured XML processors can also be tricked into revealing internal files, file shares, performing internal port scanning, and remote code execution. Since XXE attacks rely on Document Type Definitions (DTDs) being enabled, disabling them where possible is recommended. If disabling DTDs is not an option, OWASP has an XXE Prevention Cheat Sheet that offers alternative security steps. In the 2021 list this category was merged into security misconfiguration.

Security misconfigurations are the most common security risk affecting web applications. They are often the result of:

Using unpatched, outdated, or vulnerable components in an app undermines its security and may expose it to various cyber attacks. These risks arise from vulnerabilities in libraries, frameworks, and various modules which gain the same permissions as the app when executed. Disabling unnecessary dependencies, using only trusted components and following a trusted patch management process can reduce exposure to these risks. This category was named u_sing components with known vulnerabilities_ in the 2017 list.

Cryptographic failures are when sensitive data or secrets are insufficiently protected. Sensitive data needs to be encrypted or stored as a hash while in transit or at rest. For instance, passwords need to be stored as a hash instead of as plain text, and sensitive personal information should only be transmitted via HTTPS. Failing to protect sensitive data may result in attackers committing fraud, blackmail, identity theft, or other information-based crimes. Companies may face severe penalties from exposing sensitive data due to violating privacy legislation like the EU’s GDPR or the financial industry’s PCI-DSS. These risks include those listed in the sensitive data exposure category from the 2017 list.

This is a new category that covers risk exposures due to “missing or ineffective control design.” It differs from insecure implementation in that flawed design can never be perfectly implemented, while perfect design can be implemented poorly. Flawed designs may be missing necessary security controls, have dependencies with known vulnerabilities, or be fundamentally insecure for other reasons. These risks can be mitigated through using secure design patterns and principles and carrying out extensive threat modelling and testing.

This new risk category broadly encompasses failures related to faulty assumptions about software updates, critical data, and CI/CD pipelines. This includes applications that rely on insecure components or services like libraries, plugins, or content delivery networks. It also encompasses insecure deserialization (from 2017), which occurs when serialized data from a file, network socket, or stream is insecurely transformed into an object. These risks can be mitigated by only using trusted repositories, or verifying dependencies through extensive security testing.

The OWASP Top 10 Web Application Security Risks list is a handy reference for guiding developers through common issues that make code insecure. As devs familiarize themselves with detecting and addressing these risks their apps will benefit by becoming more resilient to cyber threats. Appsec folks can also benefit by taking these top risks into consideration when creating security processes. Organizations can use the list to proactively integrate procedures that identify and remediate these risks throughout the software development lifecycle.