We will try to understand this by taking example of multiple themes support.

Let’s assume that apart from main styles.css file, you have 2 theme files present:

Next, you would have them in angular.json’s styles option:

And lastly, you would handle loading of a particular theme based on the users’ choice or their preferences.

Everything works great, but both of your theme files are part of your application bundle all the time.

Let’s make a minor change in angular.json to exclude theme files from bundle:

Now if you try to build the project, it will create separate files and the output will look something like below: 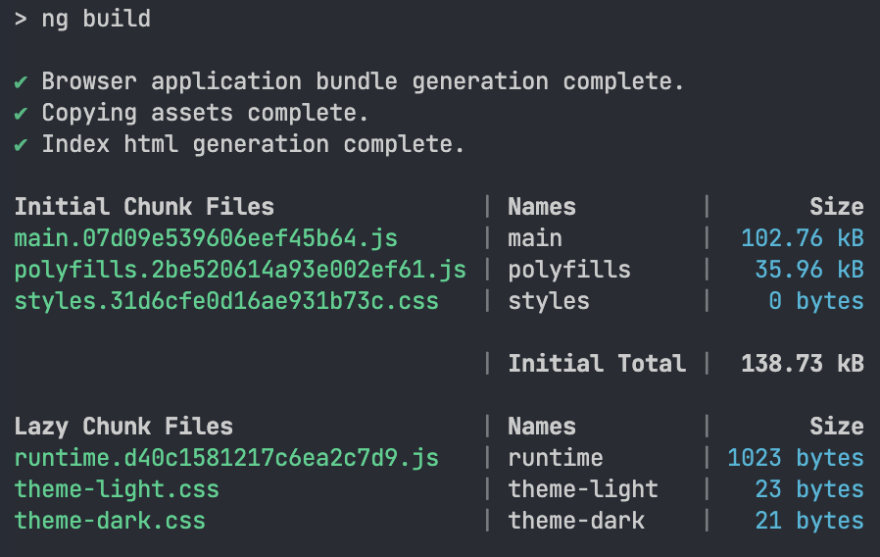 Notice that theme-light.css and theme-dark.css are part of Lazy Chunk Files. Lazy chunk files speed up the application load time, because they are loaded on demand.

We managed to exclude them from the bundle and they are externally available. Now the question arises how to load these theme files?

One way to load them is to use their bundle directly with a link tag:

You will maybe need to tweak the document base URL using base tag to successfully load them.

We learnt that we can exclude stylesheets by simply setting inject false in workspace configuration file, i.e. angular.json. And to load them on demand, we will use the bundleName option.

The advantage of excluding stylesheets from the bundle is reduced bundle size, which will in turn improve the initial load time of application and finally user experience will be better.

Confused About rem and em units in CSS?

Don't Edit Hosts File With Nano on a Mac

Create An Angular Library And Consume it locally (with debugging)

Dharmen Shah
I work on Angular, React, Electron, JavaScript, CSS, SCSS, Bootstrap, NodeJS. Love to contribute to Open-Source Projects.
How to manage object in Angular FormControl
#angular #webdev #typescript #forms
How to get an attribute value in Angular's components and directives
#angular #webdev
How to use ControlValueAccessor to enhance date input with automatic conversion and validation
#angular #typescript