Hi,
In this article you will learn git commands which you can use to get information about the changes made to your files. Below is the list of commands that you'll learn in this article.

The git log command shows the list of all commits that have been made in the current git repository.
Let's see the output when using git log:

In the image above you can see, by default the git log shows the commit id, author, date, and commit message.

The git log shows the list of all the commits. But what if you want to see the actual lines changed in each commit?
So, in this case you can use the -p flag with git log. Here p comes from patch, because using this flag gives us the patch that was created.
Let's see the output when using git log -p: 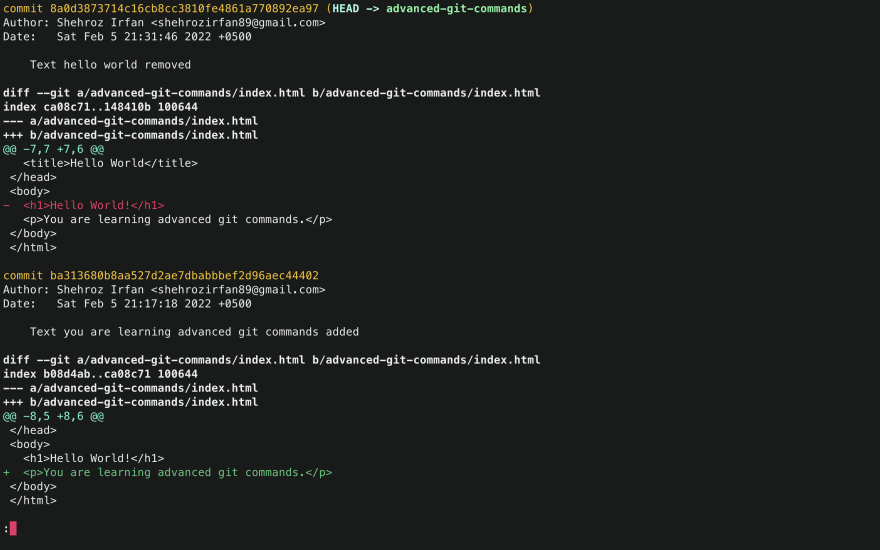 In the image above you can see that it shows the added lines with plus(+) and removed lines with minus(-), and as the amount of output text is longer than what fits on the screen, git automatically uses a paging tool that allows you to scroll using page up, page down and arrows keys. You can quit the paging tool by entering 'q' from your keyboard. In the output you have one commit below the other and each commit takes up the different space depending on how many lines were added or removed in that commit.

Below is the output:

It is the interesting command that shows the stats about commits such as how many files are changed and how many lines are added or removed.
Lets see the output when using git log --stat: 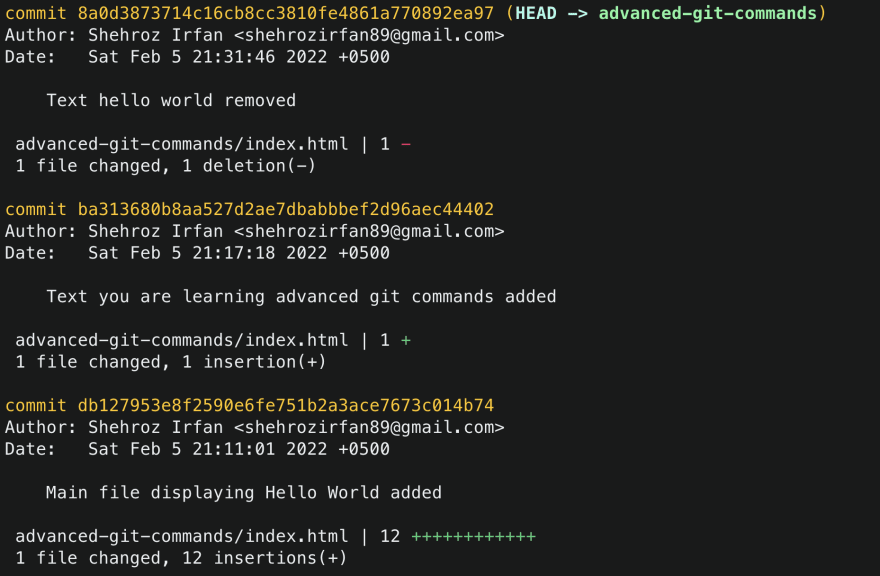 In the image above you can see it showed the stats such as the number of files changed and the number of insertions and deletions.

This command shows the changes made to the files and the output is same as linux diff -u command. But one point to be noted here is that git diff only shows the un-staged(the changes that are not added to the staging area) changes.
Let's see the output when using git diff:

In the image above you can see that git diff shows the changes made to the file by plus(+) and minus(-) representing the insertions and deletions.

There are plenty of other commands that you can use to get information about changes made. You can always use the reference documentation to find out more.
Thanks for reading!

A Command-line tool to statistics the GitHub repositories

Shehroz Irfan
Hardworking, passionate, and consistent champ, having a good grip on Ruby on Rails, JavaScript, JQuery, Bootstrap 4, MySQL. I am currently working as an Associate Software Engineer at EuphoriaXR.
7 Amazing GitHub Repositories Every Developer Should Follow
#programming #opensource #productivity #career
[Discussion] Give the challenges you have faced as a programmer
#help #discuss #programming #challenges
AWS open source news and updates, #119
#opensource #aws

Once suspended, shehrozirfan will not be able to comment or publish posts until their suspension is removed.

Once unsuspended, shehrozirfan will be able to comment and publish posts again.

Once unpublished, all posts by shehrozirfan will become hidden and only accessible to themselves.

If shehrozirfan is not suspended, they can still re-publish their posts from their dashboard.