This Week In Review

This week went a lot smoother than last week, considering that I came in with a plan of attack for tackling the junior dev job hunt! Here's how I thought it went overall: 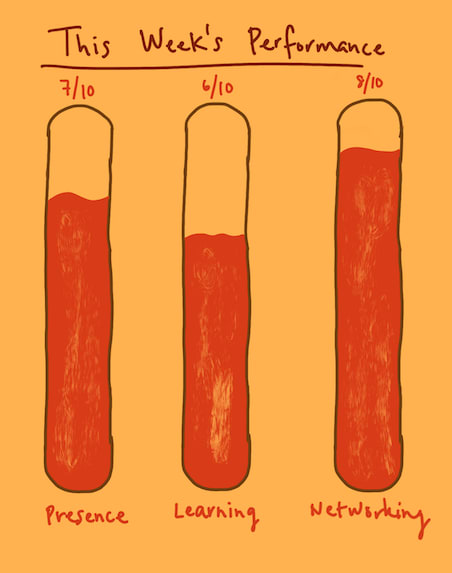 AKA how I worked on how I appear to job recruiters, companies etc

It took some time to compare my desired job criteria against the actual job postings on LinkedIn, GlassDoor, Dice and other job boards. This included:

I have been told that cold applications are typically the most unlikely way to get an interview as a bootcamp junior dev. That being said, some people get discouraged or don't understand the point of cold applications. I personally feel like cold applying is a great way of understanding more about the type of position you want to work in. I don't have expectations to hear back from employers, but I will put my best effort when sending my application materials over!

Things I Could Do Better: Send more applications out, and also do more sleuthing on finding actual people to talk to rather relying on an ATS algorithm to have mercy on me.

It is finally up! You can find it here! It feels good to be able to actually have a website that is a central place to look at my projects and also see information about me. I haven't quite figured out in what circumstances I should share my portfolio project, but I am excited to fill in the fields for job applications that ask for it.

Things I Could Do Better: Having the Gatsby portfolio site is nice, but I definitely need to revisit it to make it more responsive. I'll get feedback on it and go from there.

Reaching Out To 5 Recruiters and 5 Developers

I wanted to reach out to recruiters to just let them know that I was interested in both the company as well as particular positions their companies were hiring for. I used LinkedIn to find all the recruiters by:

Of the 5 recruiters I messaged, 0 have responded. This is alright because I came in with the understanding that this is normal. Recruiters' accounts get blown up on LinkedIn, but I wanted to do my due diligence.

Reaching out to developers was particularly successful. I looked for bootcamp developers who went to Flatiron, particularly other earlier graduates who snagged jobs. This was much easier than writing a message to a recruiter:

Things I Could Do Better: I spoke to a lot of people, and sometimes I'd want to reconnect with them at a later time (like a recruiter or someone who offered to help me out). I will be creating a separate category in Trello to track my conversations or follow-ups!

AKA how I learn to speak code, solve algorithms, and build projects

Things I Didn't Do:

These were all focused on Array operations. I think as an exercise it was really nice to keep my Javascript skills sharp. Furthermore, it was a good exercise in thinking about what a solid algorithm answer looks and sounds like. Whenever I tried solving an algorithm, I would think about some things I learned from Cracking the Coding Interview:

This helped me learn not only just how to solve the problem, but also how to talk about the problem, which is a really important part of white-boarding interviews.

Things I Could Do Better: Find some people to do actual white boarding with, and try to do some mock white board interviews with some colleagues! Also, maybe share some of my solutions with others to get feedback on the readability of my code!

Play Around With React Native

As an exercise in a mobile development, I wanted to make small steps towards learning how to use React Native by building some simple views for one of my old projects. In my quest for mobile competence, I started learning React Native Navigation so I could go between my views. There were some additional projects and meetups that I became involved with that took some time away from this, so I mainly just got around to learning and implementing some basic routing. Here's a sample:

I spent a lot of time reading React Native docs and understanding how stacks, screens, and components all fit into the larger mobile 'navigation' picture. I added a simple button with an event listener to make sure stuff worked! Here's a sample of my landing screen with the equivalent of a Link To in regular React:

Things I Could Do Better: I need to partition my time accordingly, because there's quite a few new activities that will be on my plate for the next week!

AKA building meaningful relationships with other professionals

Things I Didn't Do:

Play It Forward was one of the projects I worked on during one of Democracy Lab's hackathons. It was the brainchild of Jennifer Williams, one of my classmates at Flatiron and myself. We both loved the idea 6 weeks into our bootcamp and promised each other we'd keep working on it after we graduate. Sure enough, Jen and I reconnected and decided we'd get cracking. We met at a coffee shop and started making a plan of attack! 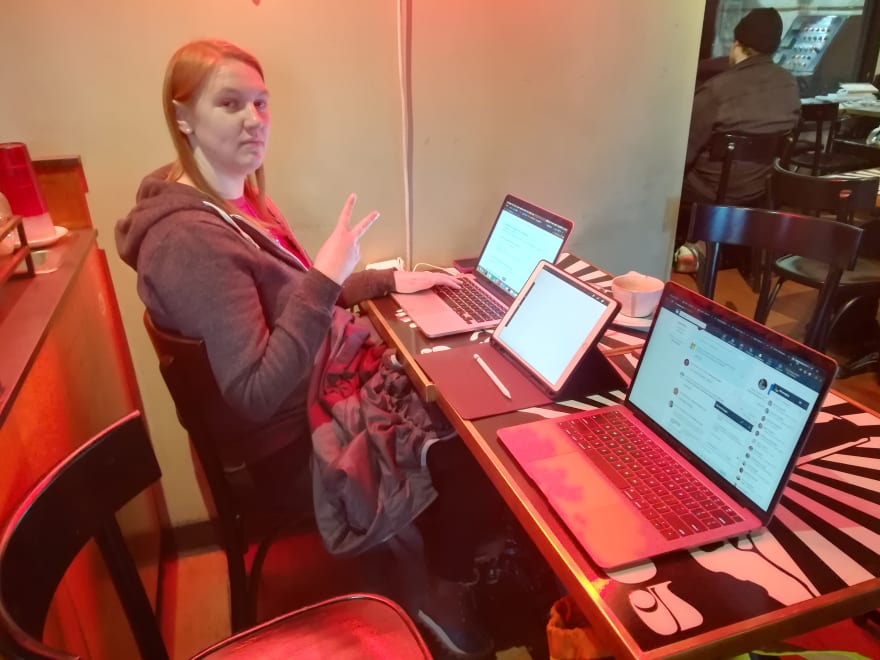 We're hoping to use this as a opportunity to practice our React chops and do some deep dives into new technologies such as GraphQL, Tailwind CSS, Apollo, Typescript.

During last week's Diversity and Women in Tech meetup, I met some really awesome people, including a PM working on a cool project. After some casual conversation he mentioned he was looking for support for a project that he was trying to get off the ground that might help local government and beyond. Coming from a government job, this really resonated with me, and it looked like he wanted some help mocking up a proof of concept web application. I volunteered to help him out and we set up a meeting this week! I brought this up to my Flatiron cohort and one of my peers, Christian Kastner, expressed interest, so we joined forces to help the PM work on this project. More details on this in upcoming posts!

Went to the SeattleJS Conference

My first conference! It was a very technical jargon heavy conference (talking mainly about cool new tools), and it was hard to follow the content. I decided to leave early and go home and work on my projects, algorithms, and job applications.

Things I Could Do Better: Try to endure a jargon heavy experience (by Googling and make connections with people!

One of my old coaches at Flatiron who is now employed, Lucy Suddenly, was a panelist during this meetup, and I wanted to support her. Additionally, I love compassionate tech spaces that are actively trying to support those who are statistically at a disadvantage in the tech field. This meetup mainly hit on the non-conventional ways the panelists found their way into a tech job.

Things I Could Do Better: I actually spent a lot of time socializing, but I forgot to actually connect with people on LinkedIn or leave thank you messages for the hard work of those who planned the event. Gratitude goes a long way!

Great Meetup with a mixed crowd of developers sharing their experiences with job hunting, networking, and learning. It was held in a loud bar, and I found myself almost losing my voice just trying to talk to people! It was really encouraging to chat with other devs going through the same experience as myself. I connected with some other bootcamp devs, but I also decided to leave early to get home on time!

Simply some time for developers to work on personal projects in a group setting. I went with my fellow graduates Jen and Fonzie and we used the time to study. We arrived slightly late and didn't talk too much to anyone. I definitely want to go again and work on my React Native Project, Personae, and Play It Forward with other community devs.

Got A Referral, Bombed an Interview

I applied to an awesome company and was introduced to one of their recruiters who gave me an opportunity to actually take a pre-screening frontend technical interview on Code Signal. If I passed the test, I would move on to the next stage.
I was given 1.5 hours to tackle three coding questions:

My strategy was this:

I spent 20 minutes on the first problem, 60 minutes on the second problem (which didn't pass the tests), and ran out of time on the third problem. I understood DOM manipulation pretty well during my bootcamp, but after 6 weeks of React and no vanilla javascript, I was very rusty.

What I Could Do Better: Practice writing Javascript, try to do as many technical interviews as I can.

Spoke with a Consultant about Contract Jobs

A Consultant reached out to me this week and wanted to know if I was interested in doing contract work in the future. I set up a meeting to learn more about it and met them on-site. After a short discussion I gleaned the following knowledge:

The person I met was actually really nice, and very honest about the pay and how their business operated. It seemed like a good opportunity for junior devs to get a food in the door with a company if hired on contract, because companies often hire contract engineers to full time positions later down the road.

When I got home, I sent a thank-you email to the person I met, and also wrote a reminder to check back in with them at the end of next week.

Reached Out To A Bunch Of People

I've been really active with reaching out to a lot of people. I think the biggest lesson I learned this week is that helping people and being nice is the best networking strategy. Many people who have offered to help me out have either worked with me on a team or are people who I made laugh. I have a couple exciting activities lined up with some people this next week, and we'll see what happens! I'll be sure to talk about it in more detail later!

This week as been really busy, but there's definitely room for improvement. I now totally understand why job hunting as a junior dev takes a lot out of you. However, I have enjoyed branching out, meeting people, working on meaningful projects, and exploring the options for my future. Whether it takes 3 days or 3 months, you'll find me here, working and blogging!

Good luck with your own endeavors!
Shawn

Dev Is Not Construction. It's Medicine.

Asking for help 101 for trainee and junior developers (or anyone)