This years Hacktobfest didn't have a great start. There was a lot of understandable controversy around the fact that some people abused the system by sending spam pull requests in order to get a free shirt. Eventually, this lead to some important policy changes, one of which was to make Hacktoberfest opt-in for maintainers.

While I think this is a good result overall, I also felt kind of sad because it put the whole event in such a bad light. Personally, I had great experiences with Hacktoberfest in the past years - both as a contributor as well as a maintainer. Which is why I decided to actively enable "Hacktoberfest" contributions on some of my projects.

For bat specifically, I opened three tickets that included ideas and instructions for contributing [1] [2] [3]. They were mainly targeted towards first-time contributors. In the following chart, you can see what kind of effect the opt-in strategy had on the number of contributions to the bat repository: 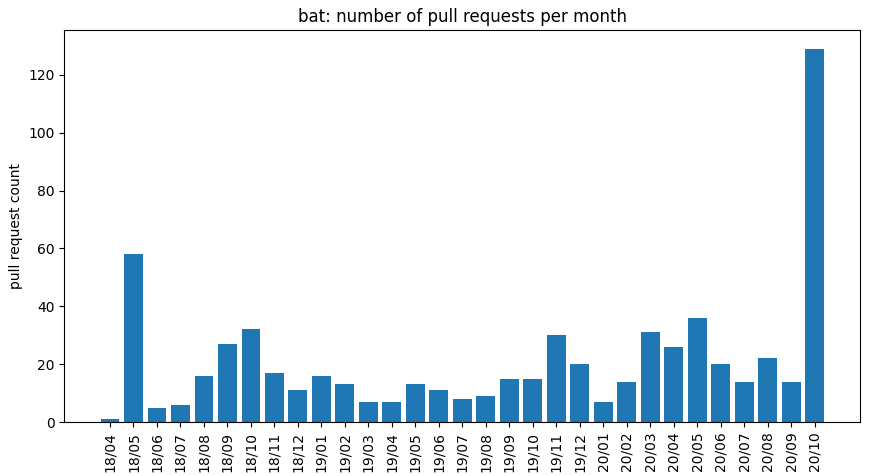 Now I should note that the large majority of these are small contributions. New test cases or documentation updates. But that does not mean that they are not helpful for the project - quite the contrary. And more importantly, I don't think that's even the point of Hacktoberfest.

The really great thing is that it motivates people to get started with open source work (or to rekindle their engagement). For bat, we received a lot of contributions from newcomers. It is fantastic to see the excitement when their PR is being merged. Most of them are also really grateful for review comments and very happy to push further updates.

We did not receive a single spam contribution. Sure, there is always a small fraction of PRs that are going to be rejected (3 out of 129 for bat). But that is not specific to Hacktoberfest. As a maintainer, the amount of work you put into an average first-time contribution is definitely a bit higher than usual. But we have all started as a beginner once. Personally, I can definitely still remember my first contributions to the open source world and the kind of excitement I felt.

To summarize: I still think that Hacktoberfest is a great initiative and I am definitely looking forward to future events.

Thank you to all contributors and to my co-maintainers eth-p and keith-hall!

Update your GitHub profile with your chess.com games with a GitHub Action

Any bugs in your IDE? Checking AvalonStudio with PVS-Studio

Once suspended, sharkdp will not be able to comment or publish posts until their suspension is removed.

Once unsuspended, sharkdp will be able to comment and publish posts again.

Once unpublished, all posts by sharkdp will become hidden and only accessible to themselves.

If sharkdp is not suspended, they can still re-publish their posts from their dashboard.

Once unpublished, this post will become invisible to the public and only accessible to David Peter.

Thanks for keeping DEV Community safe. Here is what you can do to flag sharkdp:

Unflagging sharkdp will restore default visibility to their posts.