We all have faced that situation when there was a bug in someone else's code or a third-party library and as a result your production build failed to deploy. The reasons are endless, it may be due to a non-declared method, class, or even due to the data type of the variable.

Python provides an inbuilt solution for this and it's known as assert.

Assert is an inbuilt statement in python and provides a very convenient way to have debugging tests in the program itself.

Using assert you test a condition and the result of that condition is responsible for immediately throwing an error if the condition returns false which will result in the immediate stopping of execution of the code any further.

Since assert is a statement it can be simply used as

Let us see what it does, we'll take two code bases for simulating the situations in real life. 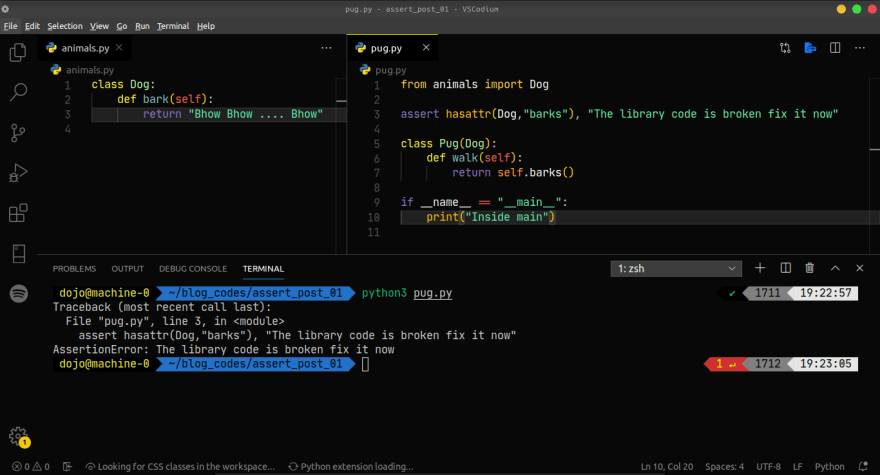 You can see here we have got the same error that we have provided in the assert statement, also observe that the assert was tested even before the

block got executed. This shows the real advantage of assert statement and why should you use it to become a better developer.

I hope you learned something new & useful from this post & don't forget to join our Newsletter.

Once suspended, sharadcodes will not be able to comment or publish posts until their suspension is removed.

Once unsuspended, sharadcodes will be able to comment and publish posts again.

Once unpublished, all posts by sharadcodes will become hidden and only accessible to themselves.

If sharadcodes is not suspended, they can still re-publish their posts from their dashboard.

Once unpublished, this post will become invisible to the public and only accessible to Sharad Raj (He/Him).

Thanks for keeping DEV Community 👩‍💻👨‍💻 safe. Here is what you can do to flag sharadcodes:

Unflagging sharadcodes will restore default visibility to their posts.