Unit tests are tests we write cheaply and with little effort to ensure that components or functions are working as expected. Dividing the code into small pieces increases the maintainability and readability of the code. Such an approach will make it easier to write tests, especially in large-scale projects. We can also use unit testing for things like edge cases and testing APIs.

As for what happens if we don't write unit tests, it might not be a problem if our project is smaller scale. However, as the project grows and the business logic becomes more complex, you may find it difficult to track down bugs.

I created a small-scale weather application to help with this article. I will try to achieve 100% test coverage for this application.

First, let's take a look at how the application looks. 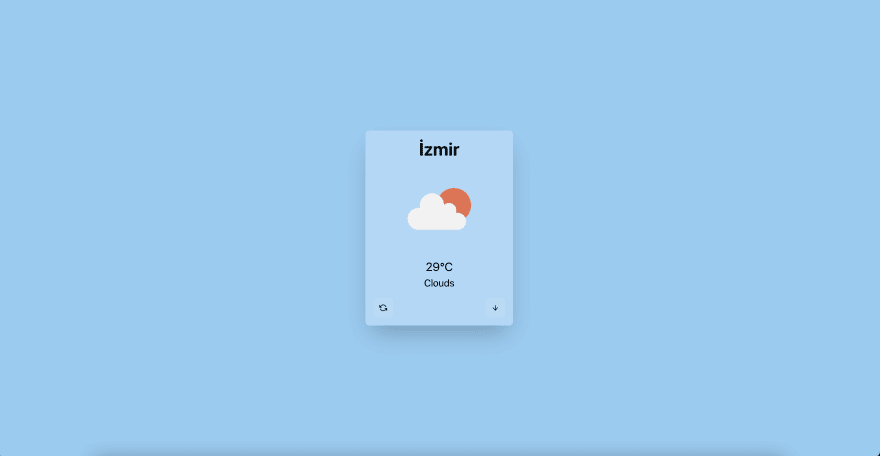 Before continuing, I want to briefly show the final version of my API folder. 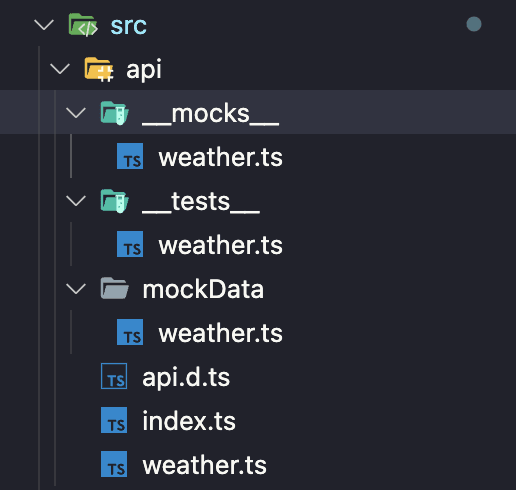 Keeping the APIs in different files will be useful in terms of order. For example, here I create weather-related APIs in api/weather.ts.

If we create a mock file with the same API file name in the API folder's __mocks__ folder, the mock function we created here will work in unit tests. This way, we will be running the tests without sending requests to the real API. But keep in mind that the function names need to be the same as well.

In cases where we want the API we use in the test to behave differently from the normal flow, we can do different implementations, such as throwing an error to the API, as you will learn later in the article, by using jest.spyOn. So the usage in jest.spyOn is no different from defining the mocked version of the APIs in the __mocks__ folder. It makes the most sense to define how they behave in the general flow to __mocks__ because only when I need to change the behavior of the API within a test, I can change it with jest.spyOn within the scope of that test.

As seen in the test script that comes ready with the create react app, we run our tests using react-scripts. By giving the file path of the API to Jest, we indicate that the relevant API is mocked. Since we have to specify this at the beginning of the tests, it makes more sense to put it in a file that is run before the tests. This file is setupTests and we need to create this file under the src file. In addition, if our application uses one of the web APIs, we can mock it here; otherwise, it will cause problems in our tests.

Here I am telling Jest that the weather API will be mocked. Jest looks for this API file, and its functions in the __mocks__ folder.

React-script uses jest when running tests. Jest is a test runner that finds tests, runs the tests, and determines whether the tests passed or failed. Jest also uses a tool called Istanbul. This tool helps us get the test coverage report. Whereas react testing library provides virtual DOMs for testing React components.

The content of the weather card component rendered in App.tsx is populated with the request of the getWeatherData function. I defined getWeatherData as a mock function that returns fake data in the api/__mocks__/weather.ts file.

Here, I wrote my tests in the describe block. This is not required, but you can use it if you want to group your related tests. We define the first parameter as the name of the block, and the second parameter as the callback containing our tests.

We write the tests in it or test blocks, just like in the describe block. The first parameter is the name of the test, and the second parameter is the callback to which the test will be written. If we have async actions in the code, it is useful to define this callback as async.

As a first test, we will test whether the given data is rendered in the appropriate place. From the results returned from the mock data we defined, Izmir should appear as the city on the screen. There are many ways to find elements, such as by role, by text, or by test id. Searching with a test id is the easiest and most commonly used method. All you have to do is give the data-testid prop to the element you want to find.

We expect the text content of the element with this test id to be the same as the name in the mock data, which is İzmir. Here we must put the expect line in the waitFor as a callback because the data is accessed as a result of 2 async actions, which are getting the location and weather data.

After coming to the terminal and running the test script with the path of the test file as above,

We are getting such an error. That is because I used a web API called navigator to find the user's location. To pass the test, the navigator needs to be mocked. We can handle the mocking process in the setupTests file.

The getCurrentPosition function of the navigator's geolocation property is used in the flow. The structure where this function returns a suitable result is as above. When we run the test again, we will see that it passed.

To get coverage, we need to add the --coverage flag to the end of the test script.

If a file that reaches 100% test coverage does not appear in the coverage report, you can solve this problem by adding the --watchAll flag at the end of the coverage script. This flag watches files for changes and reruns all tests when something changes.

After running the test coverage report script, you can see the report in the terminal. 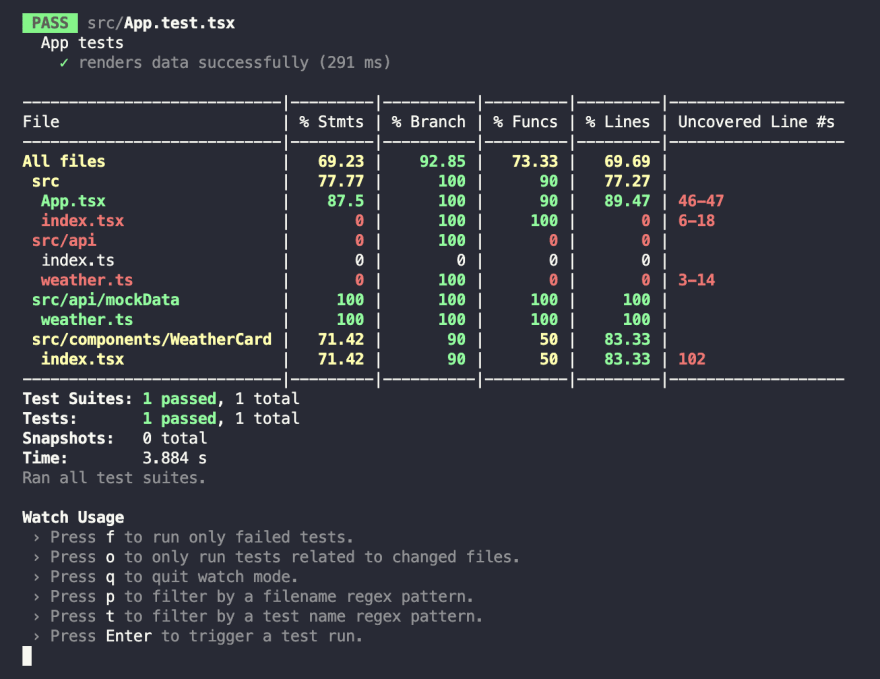 If you want to look at the more readable, detailed, and eye-catching version, you may have noticed that a folder called coverage has been created inside your project. Open the Icov-report folder in the coverage folder and open the index.html in it with the live server. And you will see something like this.

As you can see, the WeatherCard component is 71.42% covered. Let's see which conditions are not covered. 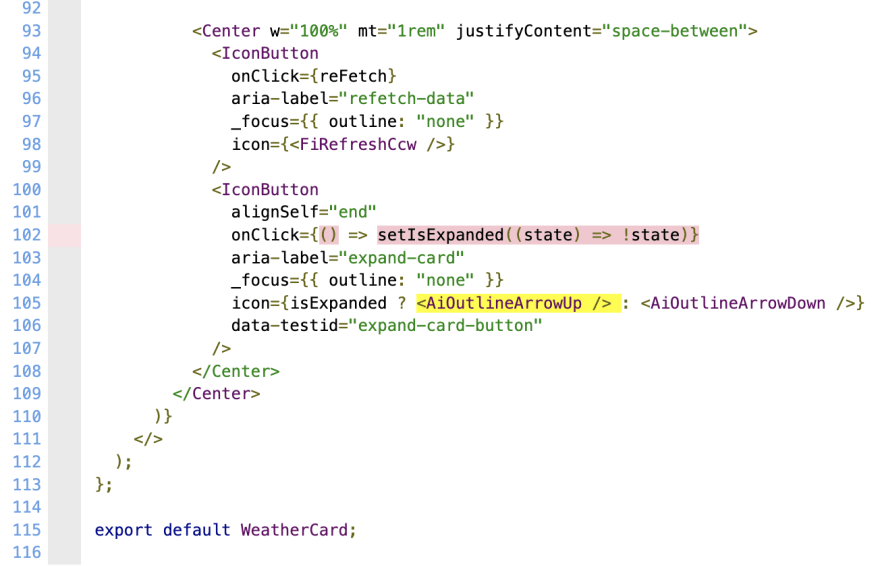 The case where we extend the WeatherCard is not covered. This forms our next test case.

What we need to do here is a user action. The user needs to expand the card. You can use userEvent or fireEvent for such user actions. But keep in mind that userEvent can better reflect the actual behavior of the user.

After expanding the card, the humidity level should appear on the screen. I expect this value to be on the screen and equal to the value in the mock data.

Due to the UI library I use here, I get an error that window.scrollTo is not implemented when running the test, but the test passes successfully. If we mock this in setupTests, we will not receive such a warning.

This is how I mocked the window.scrollTo in setupTests file.

Moving on to the next test, the catch part of the function from which we pull the weather is not covered. Here we need to drop the weather function into the catch state.

Everything in the src folder is 100% tested. However, there is no point in testing the src/index.tsx file, so we can exclude it from the test coverage. Let's add this to the package.json and which file extensions to test.

Since there is no business-related code in the API function, we will only test the request. We will use axios-mock-adapter for this. And we don't want the requests to go to their counterparts in the __mocks__ folder as before. For this, we remove the mocking process we performed in setupTests here with jest.unmock.

MockAdapter needs the instance you use while making HTTP requests as a parameter. Since I make HTTP requests using Axios, I pass the Axios instance to the MockAdapter. I pass the URL to mock.onGet as a parameter, then the reply to this URL should be equal to the mock data we defined earlier and 200 status code. Then we request the relevant API and expect the return result to be the same as the mock data.

In a real-life business project, 100% test coverage is not an unattainable percentage, but a percentage that will take time to reach. In reality, the workflow may not be this simple, and things will get complicated. For this, it is best to start by choosing a percentage like 50% as a target, and it will be possible to reach 100% over time.

Github repository if you want to take a look at the final version of the project.

Once suspended, serhatgenc will not be able to comment or publish posts until their suspension is removed.

Once unsuspended, serhatgenc will be able to comment and publish posts again.

Once unpublished, all posts by serhatgenc will become hidden and only accessible to themselves.

If serhatgenc is not suspended, they can still re-publish their posts from their dashboard.

Once unpublished, this post will become invisible to the public and only accessible to Serhat Genç.

Thanks for keeping DEV Community 👩‍💻👨‍💻 safe. Here is what you can do to flag serhatgenc:

Unflagging serhatgenc will restore default visibility to their posts.