A few years ago, web development was seen as a mysterious tech role where ‘nerds’ wrote lines of unsolvable code in dark rooms. Fast forward to today, and web development makes you think of images of innovative professionals who’ve coded their way to the top of the tech industry.

Okay, both of these are stereotypes — but web development is increasingly perceived as one of tech’s highest-earning roles, and many career-changers are drawn to the field because of its earning potential.

In this article, we'll de-code (get it?) web developer salaries, and understand the drivers behind what makes web development such a lucrative career path. We’ll also equip you with some actionable tips to boost your web development salary, no matter what level you’re at.

Let’s start with the basics:

How much do web developers actually earn?

With any career change, you’ll want to know that your new skills will pay the bills. Before embarking on a journey into web development, you might be wondering: Do web developers make good money?

Naturally, what ‘good money’ looks like is subjective — and the caveat of an ‘average salary’ is that it doesn’t reflect the full spectrum of web developer salaries and experience levels. If you’re wondering if you can get paid six figures as a web developer, we’ve got good news: You can! There isn’t necessarily a cap on what most web developers can earn, as long as they continue growing and developing their skills.

Nevertheless, it’s still important to get a sense of salary benchmarks. So let’s look at a snapshot of average web developer salaries in the UK (and beyond) with 2022 salary data pulled from Glassdoor.

Let’s look at how this data stacks up against the rest of the world: 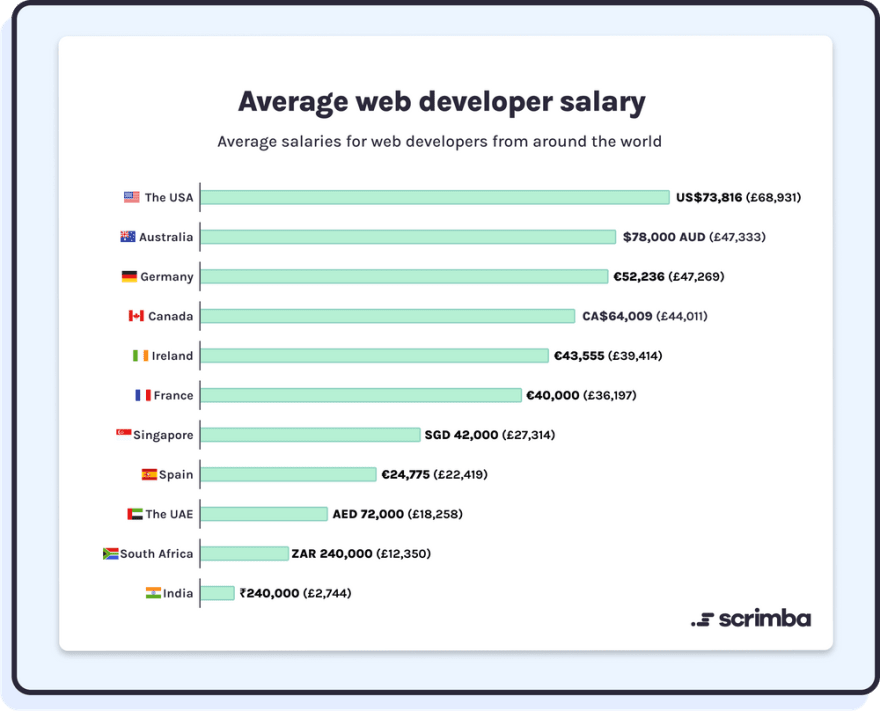 Again, this is just a snapshot. If you’re curious about what web developers earn in your country, we recommend checking out your local average web developer salaries using Glassdoor.

Why are web developers paid so much?

The short answer to this question is that web development is a complex and layered role, and developers work incredibly hard. The long answer is a little more well-rounded — so let’s take a look at five reasons why web developers are worth every penny.

Search the web for the most in-demand tech skills in 2022, and you’re almost guaranteed to find the word ‘developer’ on every single list. A quick Indeed search brought up 6,654 UK based web developer jobs alone, but a more comprehensive search, including frontend and backend development jobs across LinkedIn and Glassdoor, will show infinitely more.

The Covid-19 pandemic saw skyrocketing demand for developers as new emphasis was placed on digital experiences. Increasing demand meant a war for talent for talented devs, which led to higher salaries across the board. High demand gives web developers the upper hand when negotiating salaries, as there’s always an abundance of roles available.

Web development is known as a super accessible career path. Absolutely anyone can learn to code — and for free, at that. But to become a legitimate, job-ready web developer takes a fair amount of hard work. Most web developers are well-versed in more than one coding language, and will use a variety of coding languages in their work to get the job done.

Web development is also a highly technical role, which requires a good dose of self-discipline to truly master. To become a web developer, you’ll need to learn skills like testing and debugging, analysis, frontend and/or backend development, technical SEO, and even responsive web design. But, as we’ve learned, your hard work will pay off!

Web developers do so much more than just build, develop, and deploy websites. With each digital experience they create, it’s up to the web developer to balance client or company needs with the experience of the end user. To manage this, web development roles include a degree of project management, presentation, and collaboration with designers and other stakeholders.

Web developers are also continually optimizing their digital products; finding ways to improve how the website runs, and coming up with quick and efficient ways to fix bugs. This is highly technical and collaborative work which requires developers to solve complex issues on an ongoing basis.

In addition to being versatile, web developers also have to be incredibly adaptable. Technology — and the internet — is always changing fast. User needs are also continuously evolving, and web developers are part-responsible for meeting and anticipating those needs. As a result, a career in web development means continuous learning.

Web developers have to be in the know of new developments, trends, tools, practices, and techniques. They’re also expected to regularly upskill and improve in order to stay abreast of the ever-changing technological landscape. For all these reasons (and more) the approach and mindset developers bring to tech teams is extremely valuable.

Technically, there is a lot of overlap. Both web developers and software engineers rely on similar coding languages and technologies to build, design, and deploy digital experiences. The difference lies more in the nature of the work itself.

Web developers work primarily on web experiences, web applications, and desktop programs. On the other hand, software engineers tend to work on a wider variety of IT programs and computer systems, including hardware. Because of this, software engineering is generally seen as more technical — which is reflected in their take-home. In the UK, the average software engineer salary sits at £48,891 (13k more than web developers).

While this might seem like compelling data, there’s a payoff on both sides. One reason so many opt for web development is because it’s a slightly less stressful career path, and generally easier to get started with. Plenty of challenges to keep you on your toes, but the skills are more accessible for complete beginners.

Web development can also be a solid stepping-stone into more technical and specialized programming career paths. As there are so many shared skills between the two disciplines, there’s no reason a web developer couldn’t become a software engineer (and vice versa).

How do I increase my salary as a web developer?

As with most entry-level positions, a junior web developer role won’t see you rolling in cash. With experience, your salary will naturally increase — but there are also a few additional ways you can maximize your earning potential as a web developer:

One of the best ways to make yourself more profitable as a web developer is to update your skills arsenal. This could be something straightforward, like learning a new coding language. But if you really wanted to push the boat out, you could learn web design. Web developers who can both build — and design — a website are indispensable to tech teams and clients, as it means they can hire one person instead of two (and avoid the hassle of friction-filled handoffs). Demand for developers who also design is high, which puts them in a good position to earn more. As in, a lot more.

If you’re not able to take on some more responsibility in your current role, freelancing is a great way to gain new skills and build up your portfolio.

If you thought you had to be an influencer to create a personal brand, you’re wrong. More and more tech professionals are building personal brands that attract employers, grow followers, and boost credibility. You also don’t have to be an industry leader or senior developer to create a personal brand: Personal brands are all about storytelling, and everyone has a story to tell — even junior developers. If you want to get your name out there to higher-paying employers or clients, and showcase that you’re up to date with the latest tools and techniques, this is a vital step.

If you’re new to web development, your focus will be about getting as much industry exposure as possible. But the further you get along your career, the pickier you can be about the industries you work in. As a follow-on from building a personal brand, you might want to consider choosing a niche that makes you an ideal candidate for specific web development roles. This could be a specific industry you’ve really gotten to know, an approach you’ve mastered, or a web development skill you feel you’ve really nailed. Having a specific niche will give you a competitive edge on the tech job market, and will likely mean clients and employers within that niche will pay top dollar to secure you.

Sometimes the best solution is the most simple one, and it might be that your company simply isn’t paying you enough — especially if there aren’t any raises or promotions on the horizon. Continuous learning and professional development are important pillars of the development community, so it’s also important to recognise when you’re stagnating in your role — and the projects you’re working on aren’t challenging you.

If you follow some of the above steps, you’ll be in a much better position to negotiate a higher salary in your new role.

The web development community is big, supportive, and vocal. If you’re looking for ways to get your name out there, start there. There’s an abundance of ways to network and get more involved; including attending webinars and meet-ups, answering questions on coding forums like Discord, going to Hackathons — the list is endless. Not only will you meet gain fresh perspectives and learn new skills, you’ll also start to be seen as an industry expert — which will help legitimize your quest for a higher salary.

As you segue into web development, it’s important to manage your expectations. Yes, web developers can earn six figures, and even become millionaires. But, as is the case with any new career, you have to start somewhere.

We’re definitely not going to say ‘money isn’t everything’ because, as exciting as it is, no one would work as a web developer for free. But there are other important factors to take into account in your decision to pursue web development; like whether or not web development is future-proof (it is), if web developers are in high demand (they are), and whether web development would be a fulfilling career path for you (if you’re reading this blog post, we’d wager that’s a yes!).

Web development has a lot to offer. If you’re wondering what to get started with, we recommend a free beginners course to learn JavaScript.

Scrimba
It’s okay to change your mind about your career
#webdev #career #careerswitch
How to use LinkedIn as a developer to get a job in tech
#linkedin #career #recruitment #networking
Can you learn web development part time?
#beginners #webdev #community

Once unpublished, this post will become invisible to the public and only accessible to Alex Booker.