In this article, I'll give you a whistle-stop tour of CSS animations. While this won't be enough to learn the topic in depth, it will give you a solid overview of some of the most important aspects such as:

If you want to learn more about CSS animations after reading this article, I recommend you check out the Learn CSS Animations course over at Scrimba, which delves deeper into the topics covered here and gives you a chance to put your new skills to the test with a series of challenges.

Now, though, let's get stuck into the basics! 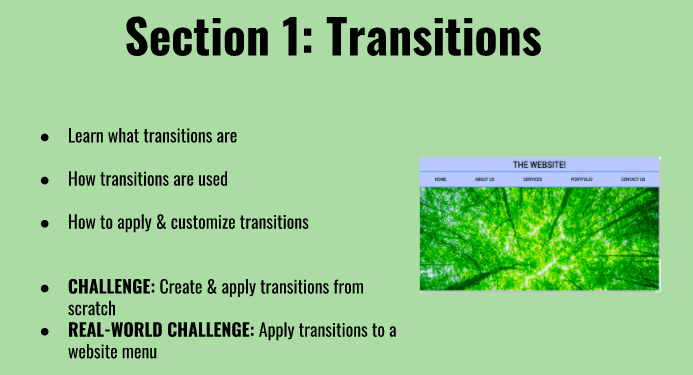 Transitions allow an element's properties to change smoothly and gradually instead of instantly chopping to something new. Creating transitions is a two-step process:

First, we add the hover effect using the :hover pseudo-class. For example, if we want our heading to change style when hovered, we add hover to the .heading selector:

Next, we add the transition property to the base selector. The first part of the value is the property we want to transition. The second part is the time it should take to transition in seconds. Multiple properties can be targeted by separating them with a comma:

It is also possible to customize transitions with delays and specific timing functions. Head over to Scrimba to find out more and practice your new skills with a CSS transitions challenge. 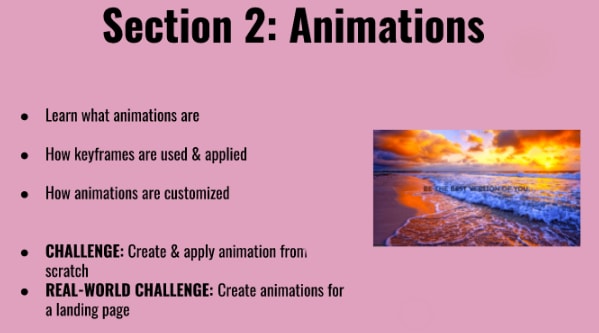 Animations allow you to change an element's appearance without interaction from the end user. Unlike transitions, they can have more than two stages, which makes them much more powerful.

We define an animation with the @keyframes rule. For a two-step animation, we use the from and to keywords:

For animations with three or more steps, we use percentages to specify at which stage of the animation we want the element to change:

Note: To ensure a smooth animation and be certain that no steps are missing, all the changing properties should be included throughout each step.

Now we have set up the animation, it's time to run it by adding the animation-name and animation-duration properties to the base selector of the element we want to animate:

Animations can also be customized with other optional properties such as animation-delay, animation-iteration-count, animation-timing-function, animation-direction and animation-fill-mode. Head on over to the course to find out more about these and the animation shorthand property, which is a handy, code-shortening tip! 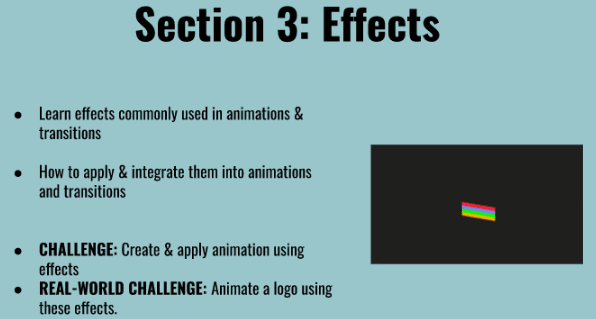 This section looks at some of the effects and CSS tricks we can use to enhance our animations.

Note: The shorthand for the above is:

To use these effects, we add them to an animation as above and then add the animation to our element's base selector in the normal way:

This section looks at some handy tips and tricks for using CSS animations:

- Prefixes: Some old browsers require a prefix to use these effects successfully:

To ensure maximum browser compatibility, you may also need to use a fallback property.

- CSS Variables: These are a way of storing values in a placeholder which can then be used multiple times throughout the stylesheet, making it easier to use and update. Variables are defined like this:

- Custom Timing Functions: Cubic Bezier functions allow us to add further customization to the timing of our transitions and animations by specifying the speed of the animation at different points during its progression. This can be visualized in the graphs at this link.

Cubic Bezier functions are defined as follows, where the first two values are the starting x and y-axis positions on the graph and the third and fourth values are the end position:

That's all for our five-minute tour of CSS animations. I hope you learned a lot and have been inspired to check out the full course over at Scrimba!

How To Build A Simple Counter App In React for Beginners

Once unpublished, this post will become invisible to the public and only accessible to Leanne R.