While it might not be everyone’s cup of tea, Unix command line is incredibly useful to learn. Unix-based operating systems are under the hood of everything from Android phones to Chromebooks, Macbooks and even Playstations so there’s a pretty high chance you have used a *nix-powered device at some point in your life.

Learning Unix command line offers you a quick and powerful way to carry out tasks like file management, troubleshooting and customisation. Plus the next time you watch Mr Robot you might actually be able to understand some of what Elliot is typing!

Inspired by the covers of Julia Evans’ programming zines, I’ve created a tutorial to explain most of the commonly-used Unix commands, along with some accompanying pixel art — specially designed for people who don’t want to make a meal out of learning Unix 😉.

To start using Unix, it’s important to know how to navigate your way around your file system and its various directories:

ls (list segments — like a lemon!) — lists the files and directories in your current working directory. You can use different options with ls to sort or display additional information:

cd (change directory) — change your current working directory to another folder. You can specify the file path you want to move to as follows:

You can go back to the previous directory with cd -or move up one folder with cd .. or move up three folders with cd ../../...

mkdir (make directory) — creates a directory if it does not already exist. For example, to create a directory called “stuff”:

You can also make subdirectories using the -p option:

You can also use rmdir to remove a directory.

The next things to familiarise yourself with are copying, moving, creating and removing things:

cp (copy) — creates a duplicate of file or directory. To use it, type cp followed by the source file and the new file name. For example:

Alternatively enter the source file name and location you want to create a copy in. For example:

mv(move) — move one or more files or directories from one location to another. Like cp it follows the format, mv sourcefile destination. For example:

touch — a quick way to create a file or multiples files. You can also use touch to change a file’s timestamp. Pass the name of the file you want to create as follows:

Be warned rm can be quite a dangerous command to use if you don’t know what you’re doing. The one to really avoid is the dreaded rm -rf / which essentially deletes every file in your Unix system. Linux blogger Wayne Richardson posted a video of what happens if you run it if you’re curious:

find — find files and directories in your system. For example:

You can also find all files with a certain pattern. For example, all files that end .txt:

grep (global regular expression print) — search for text or search within a specified file for text matching a given string. You can couple it with the -i to make case insensitive searches:

You can also use grep to count the number of times a word appears in a file:

For this file the output would be 4.

chmod(change mode) — changes the permissions for files and directories. There are three classes you define permissions for: Owner (the owner of the file), Group (users of the same group) and Others (anyone else). You enter one of the following numbers for each class when you run chmod:

chown(change owner) — changes ownership of files and directories in your file system. To change the owner of a text file:

You can compare files, link files, output the tail of files and kill processes:

cmp — Compare the bytes between different files. If there are no differences between the two files, no output is returned. The format for using cmp is:

The output for files with several differences is:

cat(concatenate) — use it to create a file, link multiple files together or display the contents of a file. For example, to link or “concatenate” two text files (file1.txt and file2.txt) to create new text file:

tail — output the “tail”, the final part, of a file. By default tail outputs the last 10 lines of a file. You can use tail as follows:

To output a greater number of lines, you can use the -n option:

kill — terminates a process. To see the signals you can kill run: kill -l. You can terminate a specific process as follows:

Some additional commands you can use in Unix include more, cURL, SSH and Sudo:

more — display more text on the screen. To use more to display the contents of a file beginning at line 10:

ssh (Secure Shell) — use it to operate securely over an unsecured network. The syntax for using ssh to login to a remote host is as follows:

Alternatively to ssh into the remote host as a root user. For example, this might be useful if you wanted to edit configuration files on a system in a virtual machine:

sudo (superuser do) — allows you to execute commands as a superuser. You can use sudo if you know the root password for your Unix system. For example to shutdown your machine using sudo:

There a number of core text editors you can use in Unix-based operating systems:

vi — the original text editor created for Unix by developer Bill Joy. Despite being released way back in 1976 it is still one of the most popular text editors for Linux-based systems.

vim (short for Vi Improved) — is a clone of the original Vi editor. Enhancements with Vim are the inclusion of plugins, the comparison and merging of files, and the ability to edit compressed files in formats such as gzip, zip and tar.

emacs (Editor MACroS) — another old-timer of a text editor. Like Vi, it was also released in 1976 and is one of the oldest open source projects still in development.

One cool tip if you launch Emacs is if you press Esc, type 'x' and type 'pong', it launches a game of pong: 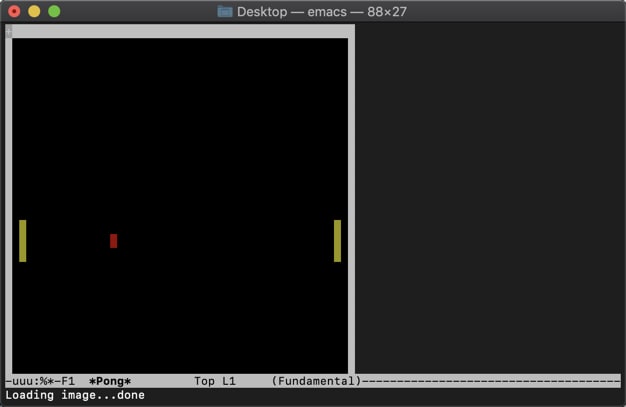 This also works for tetris, snake, and solitaire (the marble game not the card game!).

You can also use open-source text editors like Atom or Sublime if you prefer. These come with way more bells and whistles (things like linters to check there are no syntax or stylistic errors in your code). Hopefully some of this tutorial was useful. Good luck on your *nix adventures and remember to be careful with rm!

Note: Here is the full “menu” of pixel art if you want to download it.

I built a countdown timer without using any JS...or CSS...or HTML 😲?? [tutorial on dynamic GIFs for email marketing]

Role of Cross-Validation in Model Validation and Hyperparameter Search✨

5 React Libraries You Should Be Using in 2021