Out of the time that I have spent programming, most of that has been spent using Sublime-text as my primary text editor. I'm well aware that other text editors exist, but none of them seems to get the job done with as much finesse as Sublime. Now and then, I try to make the switch to Visual Studio Code to see what all the hype's about, but it's never too long before I find myself using good old Sublime-text. In my opinion, it's the best editor for so many reasons like...

As a CS student, I'm often required to use a new tool/technology every semester. For me, the hardest/longest part about learning anything new is the installation and setup process. It's what causes the most friction to get started. Sublime Text reduces this friction because it is so easy to set up for almost any programming language. Java, Web Dev in general, R, Python and markdown are just some of the technologies that I use that work well in Sublime.

Once I have installed JDK(SDK) or interpreter on my machine, I can simply compile and run code using ctrl + B and get a "Hello world" program working in a matter of minutes. Sublime neatly displays output within the editor, so I don't have to worry about opening a new terminal session and running my code there.

Though, there are occasions where I'll need to run code that requires user input, so I'll have to open up my terminal. If I'm using sublime text, I'll have two applications running that I will constantly need to switch between, whereas if I used VS-Code, I could press ctrl + ~ and run the code without switching between programs.

Here is an example of two different themes (light and dark) with the same colour scheme. 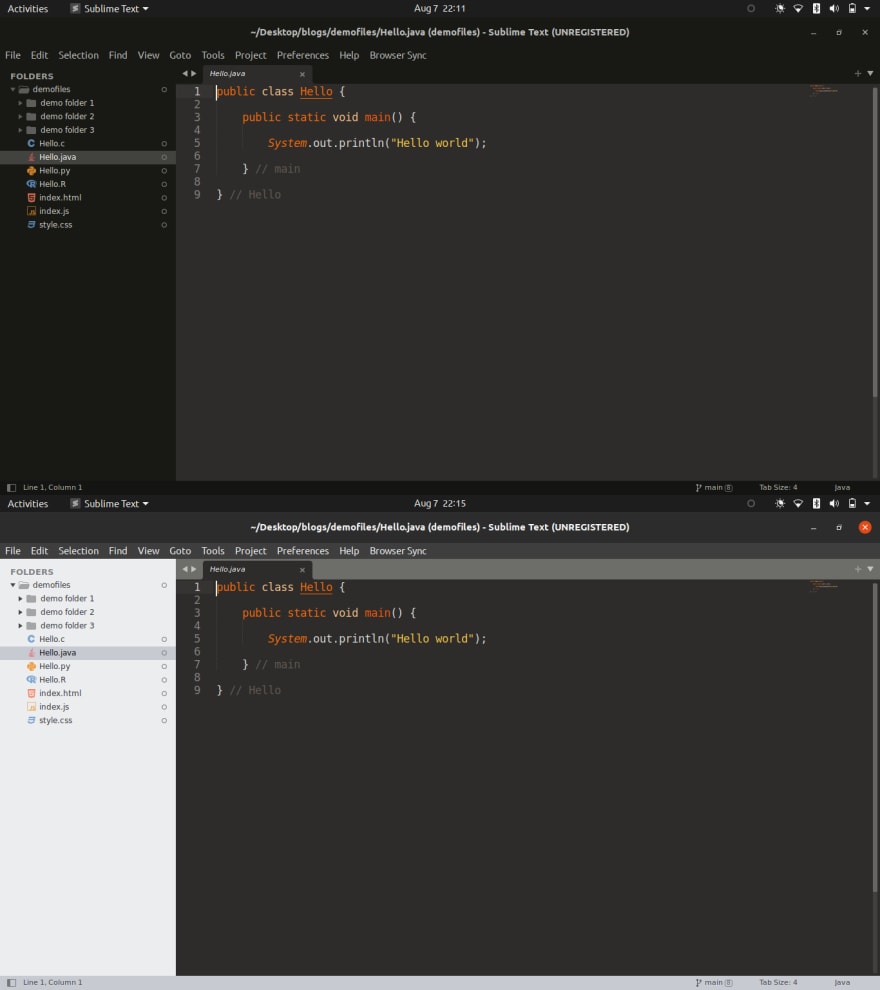 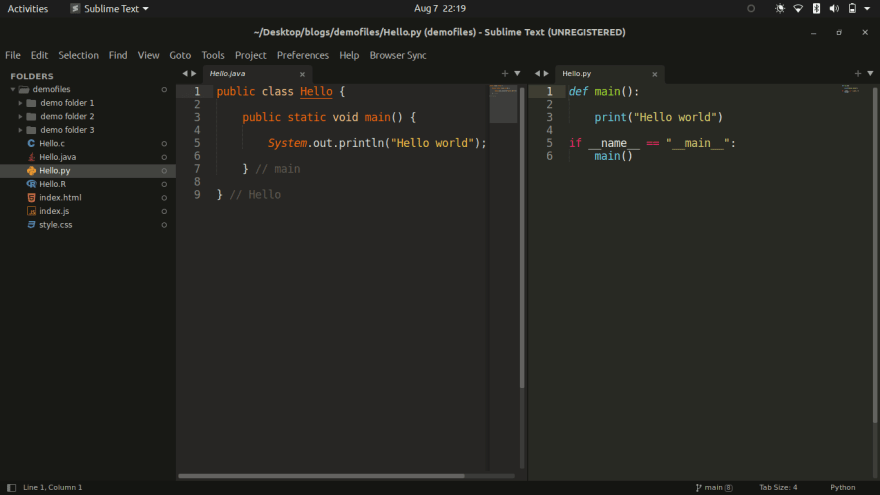 Whenever I hear a person use the terms "colour schemes" and "themes" synonymously, I take it they use VS-Code. A Sublime-text user should know the difference. In VS-Code, Themes and Colour Schemes are one and the same thing. When you change the colour scheme, it changes the theme of the text editor. In Sublime-text, the colour scheme and themes do not change together. You can combine different colour schemes with different themes allowing you to tailor the look and feel of your text editor to your heart's content.

Mixing and matching colour schemes won't make me a better programmer, but it does make me want to spend more time programming. I find that with anything, if I create a space that I have customised myself, I'll want to be in that space more, especially if I tried really hard to make it aesthetically appealing. Similarly to how a student customises their study space to study more for longer periods, I customise my editor so that I'll want to code longer.

There are key bindings that are universal, like copy/paste. But the ones that make users more efficient are usually unique to a specific application because they have been chosen carefully and specifically by the application's developers. Even though Sublime, like most editors, allow you to change key bindings to suit your preference, I never felt like I needed to do change anything. Their key bindings were well thought out. They are easy to remember because they usually stand for something, or in a position that makes it easy to access in the situations they are used in.

Every time I try to switch to a new editor, no matter how hard I try, I always hit a Sublime-text key binding out of habit no matter how hard I try. When I find out that the editor is not behaving as expected, I get frustrated - forgetting I'm not using my primary editor. I've gotten so used to Sublime-text that trying anything else immediately decreases my productivity.

My laptop had 4GB of RAM, once upon a time. It was a real test of patience for me; I'm someone who moves quickly around the computer. As such, I get easily frustrated if it starts lagging, and my PC would lag if I used any editor that was not Sublime text. When I used VS-Code back then, it would take around an additional 3-4 running applications (the equivalent of around 5 open tabs in firefox) to start slowing my PC down. I never had these kinds of problems with Sublime. Sublime just moves.

Eventually, I upgraded my laptop to 8GB of RAM, and although the lag was not as bad, it was still there. Tolerable but there. There is no reason for me to pick another editor, which is slower unless it will save me time and increase my productivity in the long run, but with VS Code, that's simply not the case.

In my head, I still have this idea that I will eventually make the switch to Visual Studio Code because it is supposed to be better, or so we're told by every other tech influencer. I understand that Visual Studio has become the standard editor, but I don't believe that it is the best tool for everyone. In some cases, like myself, making the switch would do more harm to my productivity than good, and so I have no use for it. To sum up, I am capable of much more with Sublime Text than with any other editor.

As always, thanks for the read, and Happy Coding! 🖥️