What is Logistic Regression?

In problems where a discrete value (0, 1, 2...) is to be predicted based on some input values, Logistic Regression can be very handy. Examples of such problems are - detecting if a student will be selected in a graduate program depending on his profile, or if an Instagram account has been hacked depending on its recent activity. These problems can be solved by "Supervised Classification Models", one of which is Logistic Regression.

To build such a model, we need to supply the model with some training data, ie, samples of various data values as inputs and their corresponding discrete valued outputs. The input can be defined in terms of several independent features on which the output depends. For instance, if we take the problem of predicting if an Instagram account has been hacked, we can define some independent features such as "activity time", "5 recent texts", "5 recent comments", "10 recently liked posts" and so on. Using this input training data, the model essentially "learns" what the traits of a hacked Instagram account and uses this knowledge to make predictions on other accounts to check if they are hacked.

However, you and I both know it is not that simple. So what goes on behind this black box?

Diving into the math!

First, let us set some notations.

If we have "n" features and "m" training samples, they can be arranged in an "n*m" matrix consisting of training samples as column vectors horizontally stacked together as given in the image below. Let us call this matrix X. 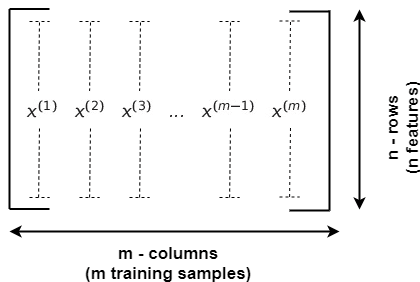 It has a corresponding vector which contains the discrete valued outputs for each training sample. It is a single column vector of dimension m*1. Let us call this vector Y. 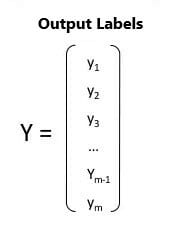 With the notations set and out of the way, let's get to the heart of logistic regression!

We first calculate the probability that the output value of a particular input is 1 (given that the set of output labels = {0, 1}), which is also denoted as given below -

Then, an irregularity function "sigmoid" is applied to Z to give us the predicted probability for that particular input set. It outputs a value between 0 and 1 as shown in the figure below. 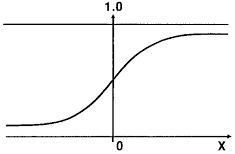 The equation for the sigmoid function is -

Here, the parameters W and b are trained and set to optimal values that give the highest accuracy in predicting the probability that the output is 1. A loss value is calculated for each training example, and depending on the value, the parameters are adjusted to give better results and reduce this loss value. This is essentially what is referred to as "training" a model. A low loss value suggests that the model has been successfully trained (or that the model is overfitting, but that is a concept for another blog 😁). This loss value is calculated by the equation -

Now, to adjust the values of the parameters W and b, we use the famous gradient descent algorithm (which is also for another blog 😁). This formula is given below -

And viola! That wraps up one iteration of training our Logistic Regression Model! Connect enough of these together with slight modification, and we get a neural net!

Hope you enjoyed reading this, thank you for reading till the end!

Self Guide to becoming a Data Analyst

Show Off Your Computer Vision Model with Gradio

Once suspended, saxenamansi will not be able to comment or publish posts until their suspension is removed.

Once unsuspended, saxenamansi will be able to comment and publish posts again.

Once unpublished, all posts by saxenamansi will become hidden and only accessible to themselves.

If saxenamansi is not suspended, they can still re-publish their posts from their dashboard.

Once unpublished, this post will become invisible to the public and only accessible to Mansi Saxena.

Thanks for keeping DEV Community 👩‍💻👨‍💻 safe. Here is what you can do to flag saxenamansi:

Unflagging saxenamansi will restore default visibility to their posts.