I'm going to assume that everyone reading this post has done some benchmarking here and there. But have you ever thought about how accurate are your readings?

In this post, we will talk about a few misconceptions, task schedulers, CPU timings, and a real example in C.

Ok, to be fair, the title is click-bait. Time really matters but not the time you see on your clock! We only care how much time is CPU spending on our process and that's usually not the wall-clock time.

The speed of your software depends on the environment that's running. I'm not talking about your computer specs. Softwares rely heavily on syscalls or I/O interfaces.
During a benchmark, You really should pay attention to this subject since I/O is really really slow and I've seen too many times when software is considered slow without realizing that a huge part of this problem is caused by slow I/O and can be improved with technics like caching and etc.

Performance is not important

Performance is UX but most micro-optimizations are usually time-wasting and not worth it. I think there's a fine line that we shouldn't cross when developing a product. You can pack your product with features but most people will hate it at a glance if It's too slow or sluggish.
I'd say that finding this line may not be as easy as saying it but I don't see another way around it.

With the notion of multi-tasking operating systems, it came task schedulers. To be able to run multiple programs at the same time we need a "scheduler" to schedule the work between limited CPU cores.

We will discuss two types of schedulers.

In this model of multitasking, the kernel preemptively schedules tasks and interrupts processes to let other processes run.

Our software doesn't notice these interrupts since its state is frozen to be used later when there's free CPU time for the process.

The Linux kernel scheduler is an example of this model.

Unlike preemptive multitasking, this model relies solely on the code itself to free the resources back to the scheduler.

The Go language goroutine scheduler is an example of this model.

CPU Time is the time that is actually spent on the CPU. So no I/O time is included in this.

For example, if you're doing HTTP requests and each request takes a second to respond, the CPU time doesn't include that second since during that time, we didn't do any CPU work and just waited for the response.

In Linux, A POSIX compliant kernel, these times are kept for each process or thread. 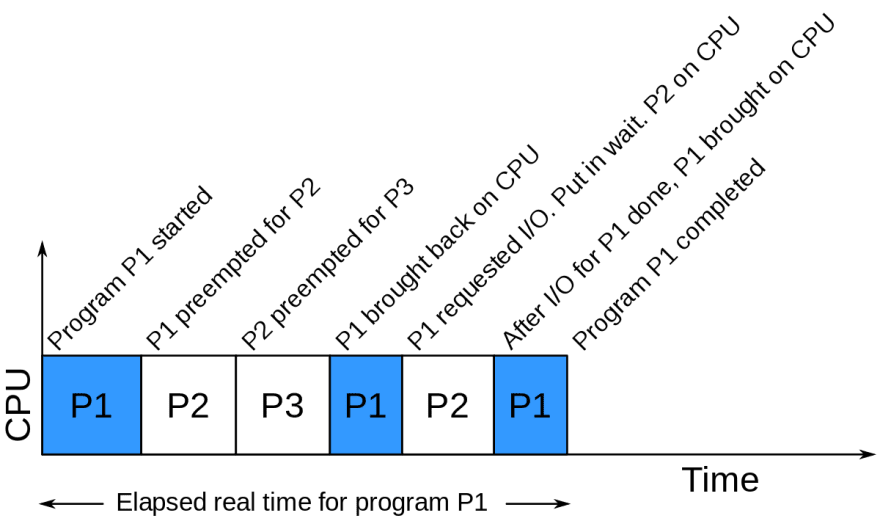 In this very simple program, we use the clock() function to benchmark a simple pi calculation code.

A few relevant and useful functions:

This is the function that we used in our code to get the clock time of our current process.

This function returns a CPU clock id by using a PID. By obtaining the clock id you're able to get the CPU usage.

As you can see, you can easily get the time of a clock.

If you're working in multi-thread software, You may use this function to get the clock of a POSIX thread.

Use this function to get the time of a clock.

In this post, we went through a few terminologies regarding the schedulers and timing and then learned how to accurately benchmark our code using the CPU clock time that kernel provides for us.