Before going to the topic, one should know about the proxy server and its purpose.

Proxy server provides a gateway between the users and internet. It is referred as "Intermediary Server" because it goes between end-users and the web pages they visit online.

It prevents the invader attacking the private network and one of the tools used to build a firewall.

Generally, more often than not, a proxy server is referred to forward proxy.

A forward proxy is an Internet-facing proxy used to retrieve data from a wide range of sources (in most cases anywhere on the Internet).

Forward proxy provides proxy services to a client or group of clients in a common network. Let me explain with a diagram below 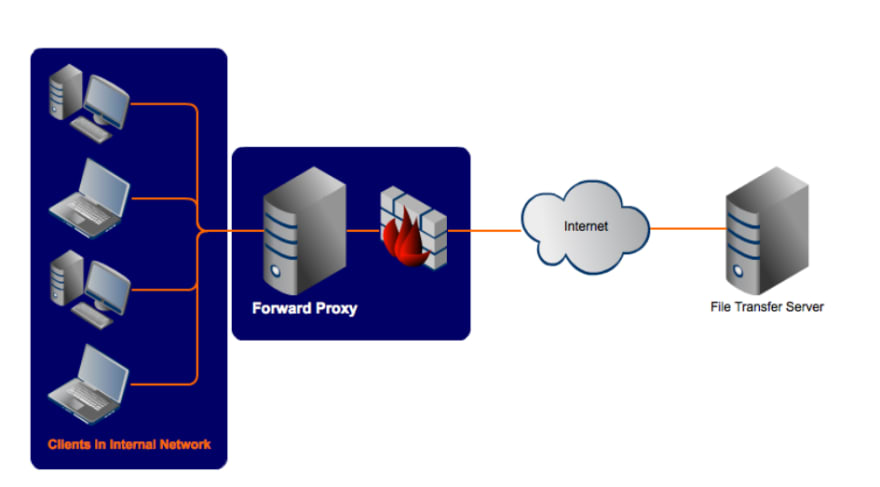 When any one of the clients makes a connection request to FTP server that is available in the internet, its request has to pass through the proxy server first.

Proxy servers has the details of requests, responses, their sources and their destinations. Different client can send request to various servers through forward proxy and it will be act as intermediate for all of them. Based on the request it can be allowed or denied.

As you can see, it provides single point of access and control which enhances the security policies. Therefore at security stand point, it is aimed at enforcing security on client in the internal network.

But there is not only client systems found in the internal network and might have servers. When client from outside network wants to access the FTP server, a more appropriate solution would be reverse proxy.

A reverse proxy is usually an internal-facing proxy used as a front-end to control and protect access to a server on a private network.

It is just opposite to forward proxy, which proxies on behalf of servers.

An attacker will find it difficult, as one to need to go through the reverse proxy to acquire the data from the server.

Just like forward proxy servers, reverse proxies also provide a single point of access and control. You typically set it up to work alongside one or two firewalls to control traffic and requests directed to your internal servers.

In most times, reverse proxies acts as a load balancer to the servers behind it. Load balancers play a crucial role in providing high availability to network services that receive large volumes of requests. When a reverse proxy performs load balancing, it distributes incoming requests to a cluster of servers, all providing the same kind of service.

P.S: I know it is more of theory, but it could be useful during its configuration with server/firewall.

Some Notes on Asahi Linux - 01

How to Create Custom Debian Based ISO

Once suspended, satizzzzz will not be able to comment or publish posts until their suspension is removed.

Once unsuspended, satizzzzz will be able to comment and publish posts again.

Once unpublished, all posts by satizzzzz will become hidden and only accessible to themselves.

If satizzzzz is not suspended, they can still re-publish their posts from their dashboard.

Once unpublished, this post will become invisible to the public and only accessible to Sathish Kumar.