This post aspires to show the application of modern machine learning methods to time series data with the goal of producing the most accurate predictions.

Once we check these steps, we'll know how to:

What is a Time Series?
The basic object of forecasting is the time series, which is a set of observations recorded over time. In forecasting applications, the observations are typically recorded with a regular frequency, like daily or monthly. 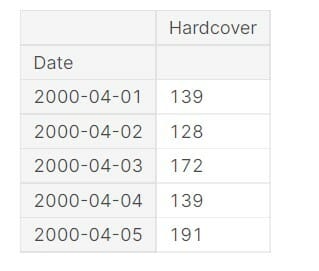 This series records the number of hardcover book sales at a retail store over 30 days. Notice that we have a single column of observations Hardcover with a time index Date.

Linear Regression with Time Series
Linear regression adapts naturally to even complex forecasting tasks. The linear regression algorithm learns how to make a weighted sum from its input features.
For two features, we would have:

During training, the regression algorithm learns values for the parameters weight_1, weight_2, and bias that best fit the target. (This algorithm is often called ordinary least squares since it chooses values that minimize the squared error between the target and the predictions.) The weights are also called regression coefficients and the bias is also called the intercept because it tells you where the graph of this function crosses the y-axis.

Time-step features are features we can derive directly from the time index. The most basic time-step feature is the time dummy, which counts off time steps in the series from beginning to end. 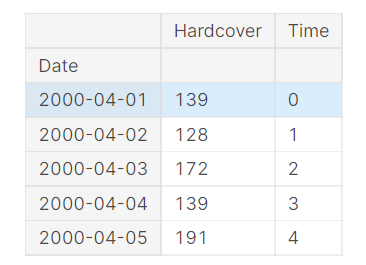 Linear regression with the time dummy produces the model:

target = weight * time + bias
The time dummy then lets us fit curves to time series in a time plot, where Time forms the x-axis.

Time-step features let you model time dependence.
A series is time dependent if its values can be predicted from the time they occured.
In the Hardcover Sales series, we can predict that sales later in the month are generally higher than sales earlier in the month.

Lag features
To make a lag feature we shift the observations of the target series so that they appear to have occured later in time. Here we've created a 1-step lag feature, though shifting by multiple steps is possible too. 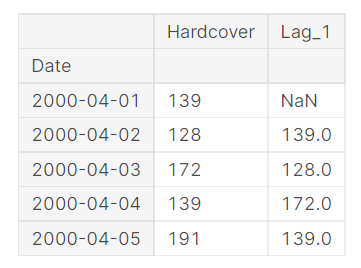 Linear regression with a lag feature produces the model:

target = weight * lag + bias
So lag features let us fit curves to lag plots where each observation in a series is plotted against the previous observation. 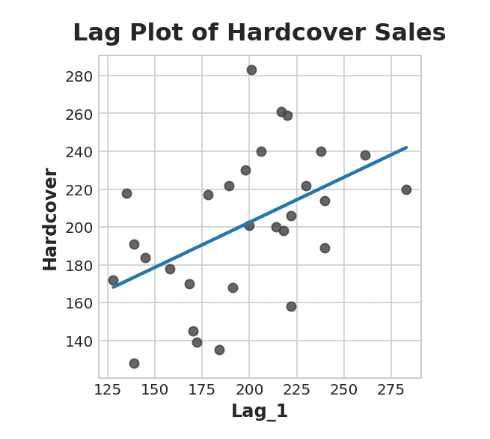 You can see from the lag plot that sales on one day (Hardcover) are correlated with sales from the previous day (Lag_1). When you see a relationship like this, you know a lag feature will be useful.

Adapting machine learning algorithms to time series problems is largely about feature engineering with the time index and lags. For most of the course, we use linear regression for its simplicity, but these features will be useful whichever algorithm you choose for your forecasting task.

Tunnel Traffic is a time series describing the number of vehicles traveling through the Baregg Tunnel in Switzerland each day from November 2003 to November 2005. In this example, we'll get some practice applying linear regression to time-step features and lag features.

Once suspended, saonideb will not be able to comment or publish posts until their suspension is removed.

Once unsuspended, saonideb will be able to comment and publish posts again.

Once unpublished, all posts by saonideb will become hidden and only accessible to themselves.

If saonideb is not suspended, they can still re-publish their posts from their dashboard.

Once unpublished, this post will become invisible to the public and only accessible to Saoni Deb.

Thanks for keeping DEV Community safe. Here is what you can do to flag saonideb:

Unflagging saonideb will restore default visibility to their posts.