In case you didn't know, exclamation marks play an important role in the bash workflow, especially for your command history! 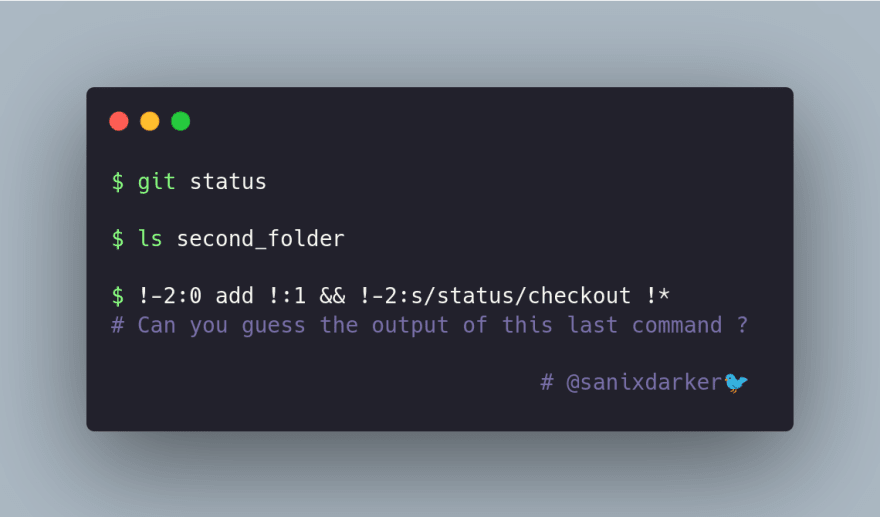 ok... let me explain this weird thing, actually it's simple :

So let's talk about it, the ! invokes history expansion, a feature that originally appeared in the C shell, back in the days before you could count on terminals to have arrow keys. It's especially useful if you add the current command number to the prompt (PS1="\!$ ") so you can quickly look at your screen to get numbers for past commands.

So, am not going to go deep inside possibilities here but just give some cool cheat-sheets from exclamations marks when you're on your terminal !

This is a pretty short list of the cool ones :

With these 4 items, you can basically play/mix around with your bash history and get great stuffs like the one up there with a substitution string.

Tools of the Trade: Dyte CLI

How to watch Star Wars in your terminal

Once suspended, sanixdarker will not be able to comment or publish posts until their suspension is removed.

Once unsuspended, sanixdarker will be able to comment and publish posts again.

Once unpublished, all posts by sanixdarker will become hidden and only accessible to themselves.

If sanixdarker is not suspended, they can still re-publish their posts from their dashboard.

Once unpublished, this post will become invisible to the public and only accessible to darker.

Thanks for keeping DEV Community 👩‍💻👨‍💻 safe. Here is what you can do to flag sanixdarker:

Unflagging sanixdarker will restore default visibility to their posts.