In this tutorial, we will take a look at server-side rendering with Deno and React. To get a proper hang of the fundamental concepts, we will start by discovering what Deno is, and how it compares to Node in terms of security, package management, and so on.

While Node is still considered a great server-side JavaScript runtime and used by a large community of Software Engineers, even its creator admits that it leaves a lot to be desired. That's why he created Deno.js.

There are quite a few reasons to choose Deno over Node.js.

What is server-side rendering?

This has the advantage of making applications more performant as most of the resource-intensive operations are handled server-side. It also makes Single Page Applications (SPA) more optimized for SEO as the SSR content can be crawled by search engine bots.

What we will build

To keep up with the concepts that will be introduced in this article, you will need a fair grasp of ES6. You will also need to have a basic understanding of React and TypeScript.

Additionally, you will also need to have the following installed locally. Please click on each one for instructions on how to download:

To get started, create a new directory in your terminal.

In the sanity-deno directory, create a new directory called frontend. This will hold the components for our React UI along with the code for handling SSR using Deno.

In the ssr directory, create a new file named server.tsx to hold our server side code.

For our Deno server, we are using the Oak middleware framework, which is a framework for Deno's HTTP server. It is similar to Koa and Express and the most popular choice for building web applications with Deno. In server.tsx, add the following code:

Using the Application and Router modules imported from the Oak framework, we create a new application that listens to requests on port 8000 of the local workstation. We've also added an index route that returns the HTML content to be displayed by the browser. Tailwind is added to the project via the link declared in the head of the HTML element.

With this in place we can test our deno server. Run the following command (within the ssr directory).

In this command, we specify server.ts as the entry point for the deno application. We also use the --allow-net command to grant the application permission to access network connections.

Navigate to http://localhost:8000 and you will see: 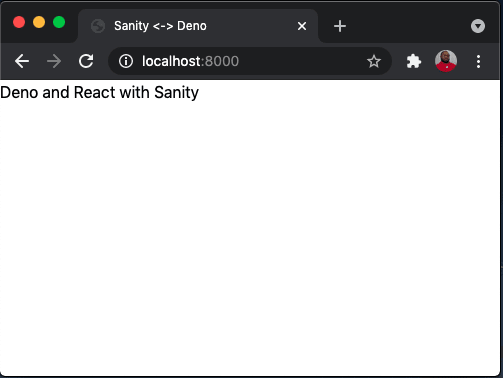 Stop your application for now by pressing Ctrl + C.

In the frontend directory, create a file named dep.ts

The dep.ts file will contain the frontend project dependencies. This is in line with the deno convention for managing dependencies. Our application will import the following packages:

Add the following dependencies to dep.ts

We use the @deno-types annotation to specify a URL where the React and ReactDOMServer types can be found. You can read more about providing types when importing here.

Next, create the App component. In the frontend/components directory, create a file named App.tsx.

In App.tsx add the following:

Here, we are still returning a h1 tag but this will serve as the entry point for React as we build further.

At the moment, we're returning HTML from the deno server but we also need to render our react components server side. To do this, update ssr/server.tsx to match the following:

Using the renderToString function, we are able to render our App component in the body of the HTML returned by our deno server.

Restart the application using the npm run start command and you will see the new body is reflected. 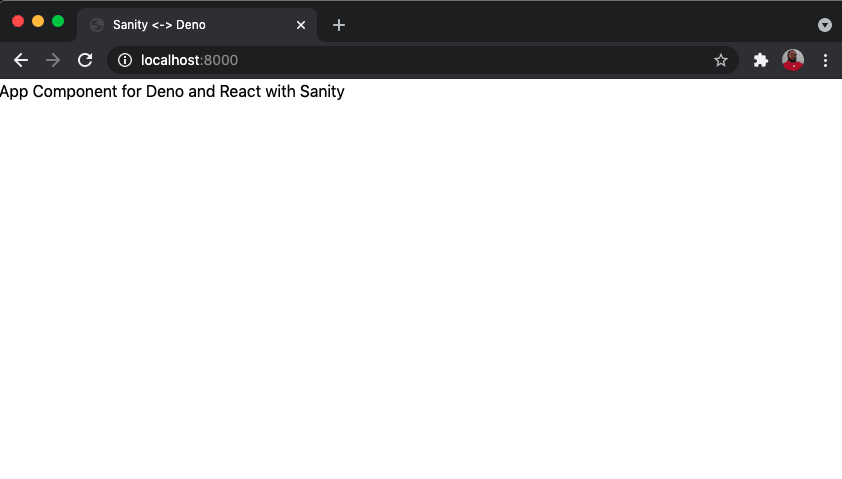 With this in place, we actually have our SSR set up. Let's add some content to our application by building the backend with Sanity.

Setting up the backend

In the sanity-deno directory, create a new directory called backend. Initialize a new Sanity project in the backend directory.

You will be  prompted to provide some information. Proceed as follows:

The Sanity CLI will bootstrap a project from the movie template, link the needed dependencies and populate the backend with some science fiction movies. Once the process is completed, you can run your studio. By default, the studio runs at http://localhost:3333.

Your studio will be similar to the screenshot below. 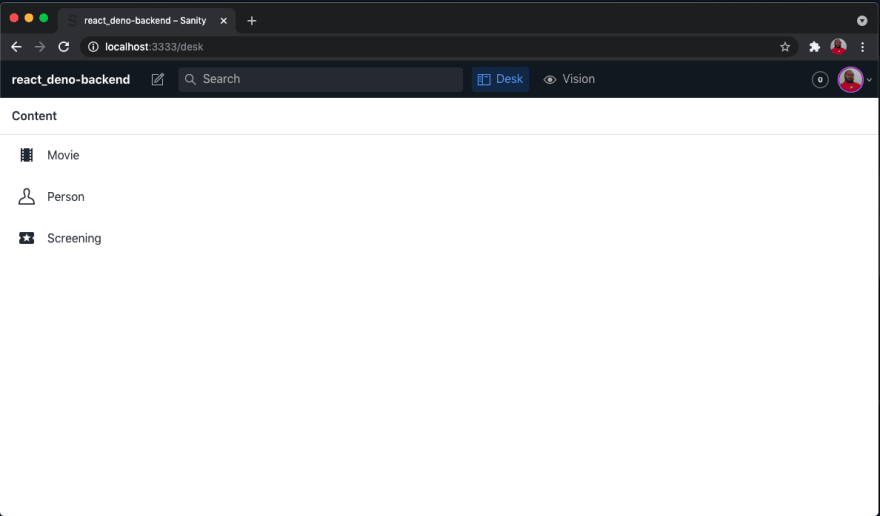 To connect our frontend application with Sanity, we need the projectId and dataset used for our Sanity project. You can find this in the api node of backend/sanity.json. Make a note of it as we will be using it later on.

We also need to enable CORS on our backend to ensure that it honors requests made by the application. By default, the only host that can connect to the project API is the sanity studio (http://localhost:3333). Before we can make requests to the API, we need to add the host for our application (http://localhost:8000/) to the permitted origins. To do this, open your Sanity Content Studio. This will show you all the Sanity projects you have initialized. Select the project we are working on (react_deno-backend) and click on the Settings tab. Click on the API menu option. In the  CORS Origins section, click the Add new origin button.  In the form that is displayed, type http://localhost:8000 as the origin. Click the Add new origin button to save the changes made.

Creating a client for sanity studio

We need a client that will help us connect and retrieve data from our Sanity studio. In the frontend directory, create a new file called SanityAPI.ts.

Rune Botten created a sample client we can use with deno here. We will use this as a foundation and make some slight modifications to suit our use case. Add the following code to frontend/SanityAPI.ts.

Note the runQuery function. We provide a GROQ query as the first parameter, the second is a callback function to be executed on the response to the provided query. This function will be called anytime we need to pull data from our backend.

We also added a helper function named urlFor which will be used to generate image URLs for images hosted on Sanity.

Lastly, don't forget to replace the INSERT_YOUR_PROJECT_ID_HERE placeholder with your projectId as obtained earlier.

In the movie directory, create two files named Movies.tsx and Movie.tsx. In the Movies.tsx, add the following:

In this component, we make a GROQ request to the Sanity API using the helper client we created earlier. In our query, we request for the id, title, overview, release date and poster image for all the movies on our backend.

Next, add the following to Movie.tsx.

Using Tailwind, we design a card that holds the poster image for the movie with the image URL generated by the urlFor helper function we declared earlier. We are also displaying the other details provided by the Movies component.

As we did for the movies, create two files named Actor.tsx and Actors.tsx in the actor directory. Add the following to Actor.tsx

For actors, we only display their picture and name. Because we don't have pictures of all the actors in our backend, we specify an image url to be used if a picture is not available.

Next, in the Actors.tsx file, add the following:

Here, we make a GROQ query to retrieve all the actors in our backed and map through the returned array, rendering and Actor component for each object in the array.

With these in place, we can update our App.tsx file as follows:

Here, we implement the client side routing for the React UI as well as style the container for the components.

At the moment, our application HTML is generated server-side. However, our application will not have the desired functionality because our JavaScript functionality isn't loaded on our page -clicking any link will trigger another render server-side instead of the routing being handled client-side. To fix this, we need to hydrate our React application as well as provide the JavaScript to be loaded client-side. This way, once the index page is loaded, the JavaScript will take over and handle everything else.

Let's start by creating the JavaScript to be used client-side. In the ssr directory, create a new file called client.tsx. In it, add the following:

Notice, we've also added a BrowserRouter to handle client-side routing once the page is loaded.

Next, we need to modify the ssr/server.tsx file to include the JavaScript bundle created (by Deno) from the ssr/client.tsx file. We also need to add a route that will allow the browser to download the bundled Javascript to be loaded client-side.

Update ssr/server.tsx to match the following:

We specify the bundled Javascript path as /main.js and added it as a route to our oak application.

Next using the Deno.emit() compiler API, we transpile and bundle our client.tsx file into JavaScript that can be run on the browser. We also update the JSX for the index page to include a script tag pointing to our bundle path.

The Deno.emit() is currently marked as unstable which means we need to give our application explicit permission to perform this operation. We do this with the --unstable flag.

With this in place, our server side rendered app is ready for a test run. Start your Sanity project (if you stopped it).

Then run your deno application using the command below

Navigate to http://localhost:8000/ to see your application in action.

Deno is relatively new in the world of web development but it is gradually gaining popularity and acceptance due to some of its advantages over Node.js. As seen in this tutorial, we learned about Deno and why it was built. We then proceeded to build a server-side rendered movie application using Deno and React.

For proper content management, we leverage the existing infrastructure put in place by Sanity to build the backend of the application. I hope this tutorial has given you some insight into what Deno is, and how to combine it with a frontend framework such as React.

The complete source code for the application built in this tutorial can be found here on GitHub. Happy coding!

🔥 Trending News, Repos and Products of the day - Digest #27