For this article we will be covering Leetcode's '329. Longest Increasing Path in a Matrix' question. A Dynamic Programming Graph Question.

Given an m x n integers matrix, return the length of the longest increasing path in matrix.

From each cell, you can either move in four directions: left, right, up, or down. You may not move diagonally or move outside the boundary (i.e., wrap-around is not allowed). 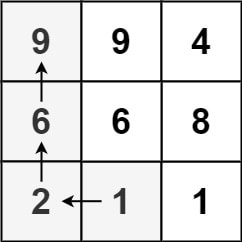 This Question is rated Hard. Which I believe is entirely accurate, so long as you have solid foundations in Graph Theory and it's applications. As well as ideally being skilled in either DFS or BFS algorithms as well as having knowledge in Topological Sort you will be able to solve this problem.

Now this is a Dynamic Programming Question. Which we all love 😉. This question should feel familiar to you if you have solved the Pacific Atlantic Water Flow problem. Because they're similar in pattern. Although, this is a Dynamic Programming Question, so of course we need to have everything hyper optimised. Meaning, we're going to have a Memoization technique in order to prevent unnecessary calculations (Depth First Search in our case).

What we have been asked is to find the longest increasing path in a matrix. Which is a Graph Problem. Where the bi directional edges are the edges in the matrix. Up, down, left and right. We need to find that longest path. Which we ultimately want to find by Depth First Search.

Wow, what a mouthful. In other words, we use DFS on each node to see how far we can get from that given node. We take this number and see if it's longer than the current longest path. If it is, we update the longest path. We then create a cache of the longest path from that node, so we don't have to redundantly calculate it later on.