s-atmech is an independent Open Source, Deep Learning python library which implements attention mechanism as a RNN(Recurrent Neural Network) Layer as Encoder-Decoder system. We are still in development stage so we have just made use of the Bahdanau Attention, commonly referred to as Additive Attention, refer to this paper. The paper aimed to improve the sequence-to-sequence model in machine translation by aligning the decoder with the relevant input sentences and implementing Attention. The Flow of calculating Attention weights in Bahdanau Attention is shown below: 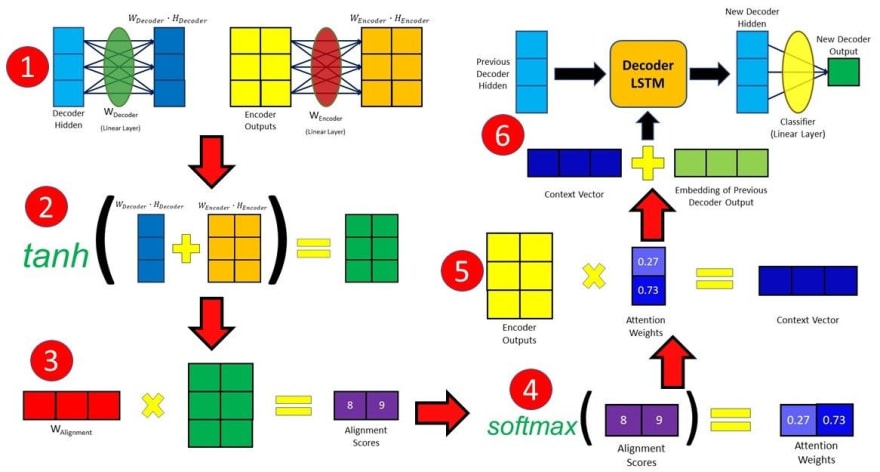 The alignment scores for Bahdanau Attention are calculated using the hidden state produced by the decoder in the previous time step and the encoder outputs with the following equation:

The decoder hidden state and encoder outputs will be passed through their individual Linear layer and have their own individual trainable weights. Thereafter, they will be added together before being passed through a tanhactivation function. The decoder hidden state is added to each encoder output in this case. Lastly, the resultant vector from the previous few steps will undergo matrix multiplication with a trainable vector, obtaining a final alignment score vector which holds a score for each encoder output. After generating the alignment scores vector in the previous step, we can then apply a softmax on this vector to obtain the attention weights. The softmax function will cause the values in the vector to sum up to 1 and each individual value will lie between 0 and 1, therefore representing the weightage each input holds at that time step. After computing the attention weights in the previous step, we can now generate the context vector by doing an element-wise multiplication of the attention weights with the encoder outputs.due to the softmax function in the previous step, if the score of a specific input element is closer to 1 its effect and influence on the decoder output is amplified, whereas if the score is close to 0, its influence is drowned out and nullified. The context vector we produced will then be concatenated with the previous decoder output. It is then fed into the decoder RNN cell to produce a new hidden state and the process repeats itself from step 2. The final output for the time step is obtained by passing the new hidden state through a Linear layer, which acts as a classifier to give the probability scores of the next predicted word. Steps 2 to 4 are repeated until the decoder generates an End Of Sentence token or the output length exceeds a specified maximum length. This above is the entire process how Bhadanau Attention works.

This is still in alpha stage so we are planning to add a Luong Attention implementation which will be added by 2020. We are also developing a new attention algorithm for our library.

ChatGPT is at capacity right now; yes, it is really annoying

Somyajit Chakraborty
Researcher/Developer on topics like Genetic Algorithms, Dynamic Programming, Speech Synthesis, Parsing, Deep Learning, Artificial Intelligence, Natural Laguage processing I flirt with code :)
What was your win this week?
#discuss #weeklyretro
Why I Decided to Invest in My Portfolio as a Junior Developer
#webdev #career #codenewbie #help
10 of the coolest developer T-shirts from devshirt.club
#watercooler #codenewbie #career #writing

Once suspended, samsomyajit will not be able to comment or publish posts until their suspension is removed.

Once unsuspended, samsomyajit will be able to comment and publish posts again.

Once unpublished, all posts by samsomyajit will become hidden and only accessible to themselves.

If samsomyajit is not suspended, they can still re-publish their posts from their dashboard.

Once unpublished, this post will become invisible to the public and only accessible to Somyajit Chakraborty .

Thanks for keeping DEV Community 👩‍💻👨‍💻 safe. Here is what you can do to flag samsomyajit:

Unflagging samsomyajit will restore default visibility to their posts.