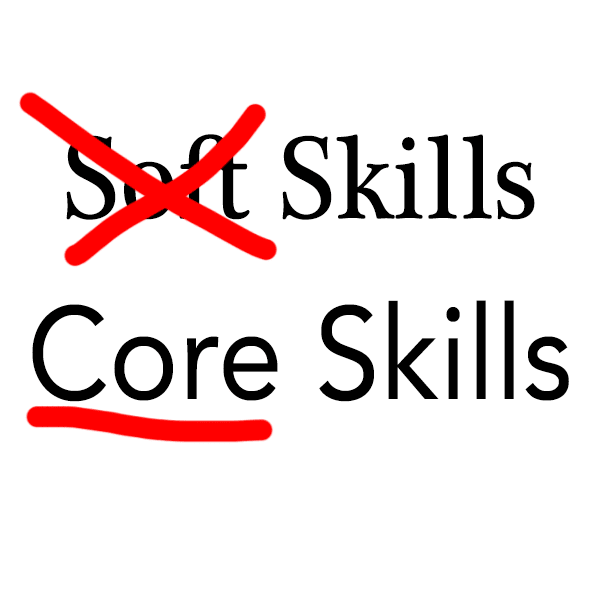 As we know, our 'soft skills' are super important, and these skills include but are not limited to: verbal communication, written communication, influencing skills, empathy, personal skills, pitching, listening, delivering/accepting feedback and much more.

However, the problem I and a lot of others have with the term Soft Skills (compared to "Hard" skills, such as writing code or knowing a certain job-specific tool or technique) makes the term sound secondary or less important. This connotation couldn't be further than the truth.

So, I believe that we should rename Soft Skills and Hard Skills to Core Skills and Tech Skills (for the IT field, other fields may go with other terms than "Tech"). To be clear, this isn't something I've invented, I've heard it around* and wanted to reiterate the point.

Core is, well, just that...core! Its the solid inner part of you. The bit in which you build. The bit that has to be solid, really before anything else is to be done. The bit you work on, keep strong. The bit that can lose strength, get sore and that needs TLC from time to time. The bit that others naturally have stronger than others. Gosh I like this term.

So that's it. Core Skills. Its not that I hate the term soft skills, its just the name isn't really the point – I want you to work on these skills regardless of how you want to name them. They're just so important. But let's work on naming them with a sense of importance in the hopes that others agree – this is something we'll all benefit from.

Some quick links for Dev.To folks/anyone:

*I can't remember where I first heard this, but I've now heard this multiple times. In an effort to find out more, I've asked the two people I heard this from most recently, and they had the same experience. A reader pointed out it might have been this thread by Aurynn Shaw, who does a lot of great speaking and blogging around Core Skills. Its spread since then, so great job her! Credit is hard 😅.

So the journey begins

Where we can find jobs/projects?

Sam Jarman 👨🏼‍💻
Software engineer (iOS/JS/Anything). Likes: blogging, running, improvising, public speaking, positivity, helping newbies and great banter!
How to Troubleshoot Any Problem
#career #troubleshooting #coding
We can only keep learning if we keep teaching (100 Bytes Of Wisdom: Day 72)
#career #journey #advice
When you see great code, ask yourself why it is great and can you replicate it? (100 Bytes Of Wisdom: Day 71)
#career #journey #advice