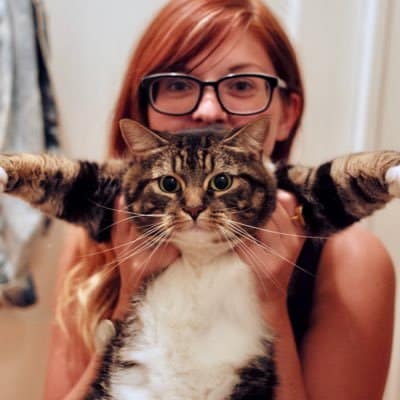 👋 Hiya! I’m Monica Dinculescu. I’m a Google emojineer (read: someone who engineers with emoji), and I work on Polymer. I talk a bunch at conferences about web components, and sometimes get antsy about web font loading on the internet.

I’ve been actually thinking about this a lot recently. Honestly, the shortest answer is that I sort of just fell into it and never found anything else to do. I come from a family of programmers; both my parents were programmers. Most of their friends were programmers. I grew up in Romania, where education is nothing to joke around with, so in grade 5 I went to a school that specialized in programming. I had a brief stint at pretending I was going to be an architect for a bit, but having done it for so long, programming just felt easier. So there was never really a universe where I wasn’t going to be a programmer, I guess.

We all love emoji, but what is your fascination with them?

A bunch of years ago, Chrome couldn’t render emoji. I worked on it at the time so I thought I could try fixing them (I didn’t). The thing about Chrome is that the only way to fish is by boiling the ocean, so in order to figure out why they weren’t rendering I had to learn a looooot about emoji and Unicode. And once I had all that wealth of information, they’re kind of interesting -- they were created because someone wanted to communicate very common things, like the weather, very easily, and now they’ve become this giant dictionary of over a thousand glyphs that anybody can use. Pretty cute!

Does your development style change working on open source code like Polymer vs closed source code? If so, how?

I tend to code with the fear that one day someone will look at my code and think I’m an absolute idiot, and that doesn’t really change between open and closed source (though the number of people looking at your code are faaaar bigger in open source). The one thing that I did notice changed about my coding style when I switched to Polymer is that I tend to also code with future Monica in mind. I work on the Polymer Elements, which is a suite of about 100+ widgets; you end up switching projects and contexts a lot, and holding all that information in your head is kind of hard. So I leave a lot more long-form comments, and document a ton more since joining the team.

What is it like working at a large company like Google, compared to a smaller company? Do you think there are many differences?

I’ve only really worked for big companies, so I don’t know! There’s a lot more rules, I think, at Google, and that’s not necessarily bad. Even open source for a big company has big-company legal implications, so you become a little more conscious about licensing and stuff like that.

Do you think your public speaking at various events has helped your career? And how/how not?

Absolutely! I think it’s given me so much more visibility into the community, and forever indebted to all the people who keep inviting me to make mouth sounds at their conferences! I’ve met so many lovely people, some of which are now my friends, who keep teaching me awesome things. Like how to make Twitter bots and better art!

“Your code is not who you are”, but I think I’m still trying to learn it. Working in open source is a bit of a heart breaking experience at times, because you will invariably run into mean people who will say mean things about you and your code, for everyone to see. It sucks that this is a part of our culture, but while trying to change it, it’s also really important not to take these comments to heart, or take them as a personal failing.

God, I’ve started joking recently that it’s “do things with the confidence of a white man” (blatantly stolen from a tweet). Is that rude? That’s a bit rude. It isn’t wrong though. Anyway, in all seriousness, I get asked this a lot, so I did a brain dump about it here.

I’ve never really enjoyed reading books about programming, since it seems too much like homework. I like goal-oriented learning, so most of the things I end up reading are tutorials or blog posts when I am stuck on a problem. So instead, I’m going to go off script (gasp!) and recommend a non-programming book. I’m currently reading “Me talk pretty one day” by David Sedaris, and it’s absolutely hilarious.

Web Components! Polymer! The clouds outside! How about @to_emoji, this silly Twitter bot I wrote that translates English to emoji? It’s pretty chill.

Beginner guide to Hacktoberfest with step by step guide to your first contribution.

How to choose the right NPM package in 4 steps 📦