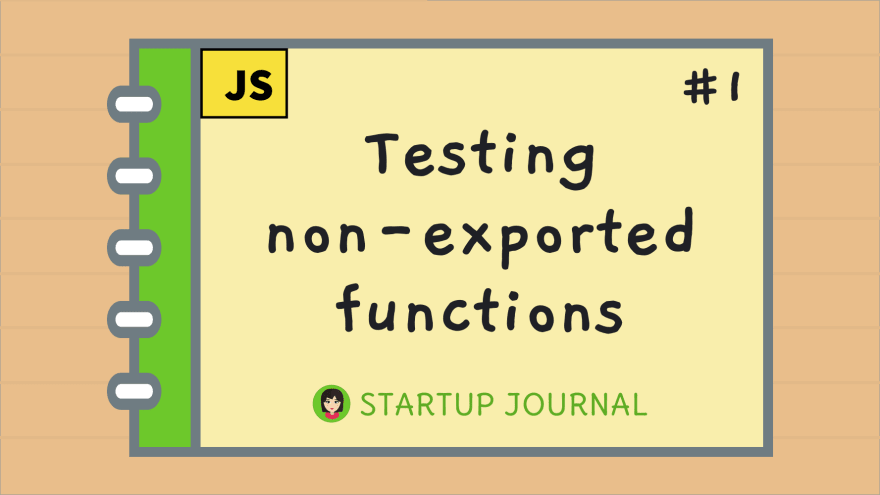 Recently, I finally integrated unit testing into my startup project. I've settled with Jest, I'll speak more about this in a separate journal entry. While writing my test, I ran into a bit of a dilemma of trying to write unit tests for non-exported functions 😖

And a unit test could be something like this:

Now, what if the function is not exported?

And then I discover this nifty package called Rewire! Here's their official description:

Rewire adds a special setter and getter to modules so you can modify their behaviour for better unit testing. You may

The second point is exactly what I needed!

Installing Rewire for a Vue app

Instead of using rewire, I used a package called babel-plugin-rewire. Which is essentially ES6 version of rewire, so I can use import. Here's their description:

It is inspired by rewire.js and transfers its concepts to es6 using babel.

Alright, now that it's installed, let's revisit our non-exported function.

And now, we can use rewire to fetch our non-export function:

Non-exported function must be called in Exported Function

✅ You need to also call this in an exported function of the same file.

Now, can you actually test it 👍

To my dismay, after I finally got rewire set up and successfully added testing for my non-export functions. When I serve up my Vue app, I got this error:

❌ Uncaught Error: [vuex] actions should be function or object with "handler" function but "actions.default" in module "editor" is {}.

🤦‍♀️ Like many developers, when one hits a roadblock, you shut the project and give up! NO! That's not the developer way -- you go to LinkedIn and starting looking for a new career 😖 Again NO 😂 Let's see what Google has to say!

Often, I'll tell junior developers to just Google it. But even googling is a skill that takes time to hone. And knowing what to search is important. So I'm going to share the terms I used:

Luckily on the second search, I found the solution! Turns out GitLab had the same problem and even posted a solution. Let me copy and paste their findings:

[Rewire] adds a default export to any module which does not already have one. This causes problems with our current pattern of using import * as getters from './getters.js' for Vuex resources because default will end up being an unexpected data type (object, not function). As a result we've had to add export default function() {} to each of our getters to ensure this doesn't cause Vuex to complain.

Excellent, not only did they explain the problem, they provided the solution 👏

Using the solution found from GitLab, all I had to do is add a default export like so:

Of course, I could avoid this default export by following a different pattern. On the official Vuex guide, they have a Shopping cart example you can reference. They have something like this:

Maybe down the road, I'll change it, But that's what I have now so I'll just leave it 😅 In programming, I learned very early on, that there are always multiple solutions. There is often no best way, there's only the way that works for you 👍

I like my current setup. And to be honest, I'm more experienced with this way (heads up, I work at GitLab). So for me, this is MY best way. And when you're working on a startup, proficiency is key. You don't want to spend your time spinning your wheels to learn something. It's all about the RESULT. Pick the tool you're more familiar and start producing 💪

If you come from my Tidbit community, you will be familiar with my more beginner-friendly posts. However, with my journal series, some of the topics will be a bit more advance. As they are topics that I'm encountering while I'm building up my startup project. I'm learning so much from it so I just want to keep knowledge sharing. And to able to churn these post out quickly, I often won't be able to lay out the foundation -- so I apologize in advance to the more beginner folks 😓 But don't fret! We all once started as beginners, as long as we put in the work, we can all level up! 🧗‍♀️

Here's what I'll do, I'll link up resources that might help you follow my entry a bit more. Thanks again for reading my journal and can't wait to share more!

Once suspended, samanthaming will not be able to comment or publish posts until their suspension is removed.

Once unsuspended, samanthaming will be able to comment and publish posts again.

Once unpublished, all posts by samanthaming will become hidden and only accessible to themselves.

If samanthaming is not suspended, they can still re-publish their posts from their dashboard.