So Closures provides us a way to still have access to the variables inside the function that has completed its execution.

Let's look at this concept with an example.

Closures gives us a way to preserve the scope chain of outer functions even after it completes its execution. One use case of this is Data hiding/ Data Privacy.

So in other words, we can say that closures are functions that have access to all the variables in scope when it was declared.

A major disadvantage of closure is that proper garbage collection does not occur if there are closures. The variable environment of the outer function will not be cleared if there is an inner function forming a closure with the outer function. This can lead to memory leaks.

Common use cases of Closure

HOCs are functions that take one function as an argument or returns a function.

HOC to round numbers to a certain number of decimal places

Same way, we can also use closures to create functions that returns numbers fixed to different decimal places as shown below.

If there is a use case to change the style properties dynamically and later if the user wants to return to the initial style, we can keep the initial style state saved and access it using closures.

In the above example we can see that font-size and color property for the sampleText class is being set manually in the beginning. Afterwards the font-size is updated using the updateStyleProp closure function. But even after updating the styles manually, the getInitialState closure function which has access to the intialState variable in the outer function is able to print the initial values.

Singletons are a type of JavaScript design pattern in which one class is instantiated only once and only that one class is made available publicly. 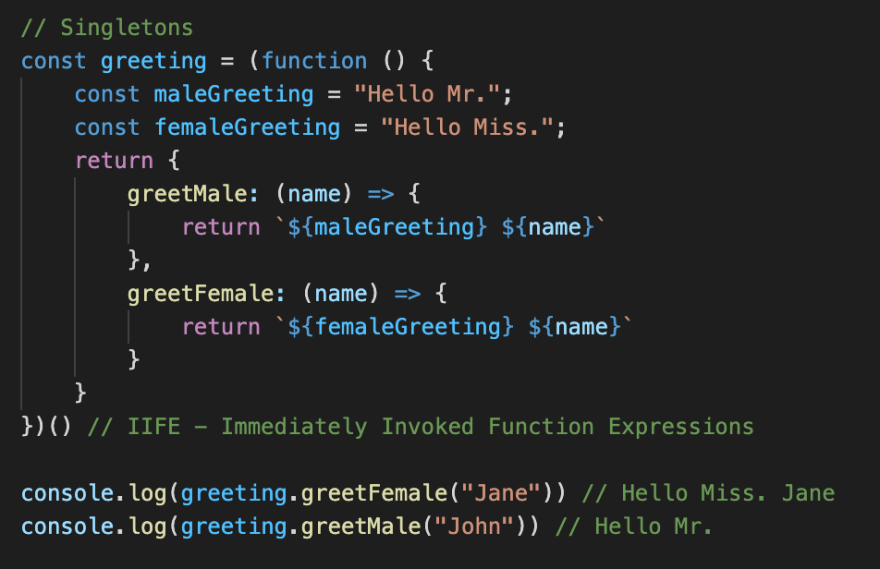 As shown in the code above, the maleGreeting and femaleGreeting variables are accessible within the greetMale() and greetFemale() functions which form a closure with the singleton function greeting().

We have understood the concept of closure and seen some examples of how and where they are used in the JavaScript programming language.

Closures are cornerstone to functional programming!

Backend Operations in PHP from 0 to Hero(Pt. 3 Heavy operations and AJAX)