Consider, you have a Class Named Students in which there is name and id for a student.

Now we want to implement a Generic class which will automatically writes the object to a file with file name begin the name of the class. Now if there is already a .txt file of that same class then it should append the file with given new object.

A Program the read and write any type of objects plus it writes the same type objects in their own text files (Appends if already present or create new if object of such type is written for the 1st time) making it awesome code that handles the files automatically.

QUICK THINGS TO KNOW BEFORE STARTING

So First I have made two classes named Students.java and Employees.java and my main class is Main.java.

Main.java is shown at the end of this post, while Student.java & Employees.java is not shown for the sake of complexity but if you do need to see them.

In Students.java I have made a Constructor, getters and setters for name and id

IN Both Classes I Have Made A Method Named getData() That Just Displays The Data (Name, Id, workhours etc) of our Object.

I have made a class name GenericRead_Write.java and I have parameterized it by using . We also created a field named object with Type T. Now in Constructor I have set the instance object with the locally passed object. The Purpose of state variable is explained in code.

String fileName = object.getClass().getName() + ".txt";
This basically gets the name of the object you passed in Generic Class with appending .txt at the end of it. Next we will make a ArrayList with T as type parameter with name list.

At Forth Line we calls the read() method to check if there is file with name fileName is already present or not. If it is present then we read that file and store objects in list Assuming that there is not file present for Students or Employees [These are two test classes I made for the sake of demonstration] at this point, we add the object passed by the user to the ArrayList named list. And in Try and Catch Block we are make a object of FileOutStream with file name being the filename (it also automatically creates the file with that name if it is not present) and then we make an object for ObjectOutputStream to write the object to file. And finally, By Using Foreach Loop we are writing the object to file. Before compiling, There is no file.

After Comiling Programs creates a text file with our class name and package name being at start. See Below

First of All this method will return a generic ArrayList so we used ArrayList<T> as return type.

Just like Previous we are creating a accurate fileName and ArrayList named list. Now to read objects we will use object of FileInputStream and pass it to objectInputStream. Now we will make a boolean varibale named END_OF_FILE which initially will be false now in while loop we can not (!) the END_OF_FILE So, loop will run and read the objects and store them to ArrayList. Now in catch statement we can use EOFException (END OF FILE Exception) and when we reach the end we can simply put the END_OF_FILE equals to TRUE Hence Loop will end. Now we can simply return the list.

Now at Main.java we can access methods of our objects returned by this list by using type casting. 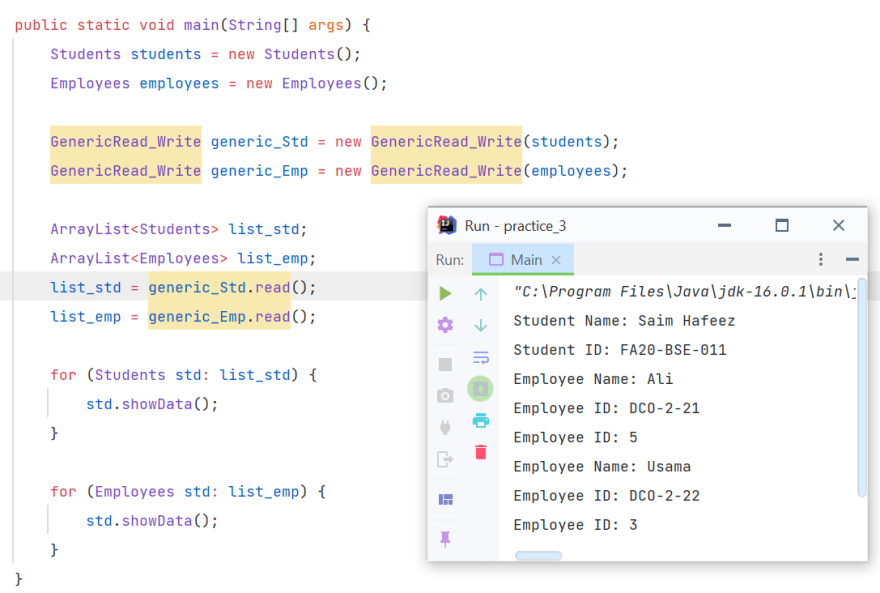 If you have any question, ask me in the comment section.
Visit, my site for more Tutorials and examples