The high-level programming languages are broadly categorized into two categories:

In the procedure-oriented approach, the problem is viewed as a sequence of things to be done such as reading, calculation, and printing.
Procedure-oriented programming consists of writing a list of instructions or actions for the computer to follow and organizing this instruction into groups known as functions.

The disadvantage of procedure-oriented programming languages is:

“Object-oriented programming is an approach that provides a way of modularizing programs by creating partitioned memory area for both data and functions that can be used as templates for creating copies of such modules on demand”. 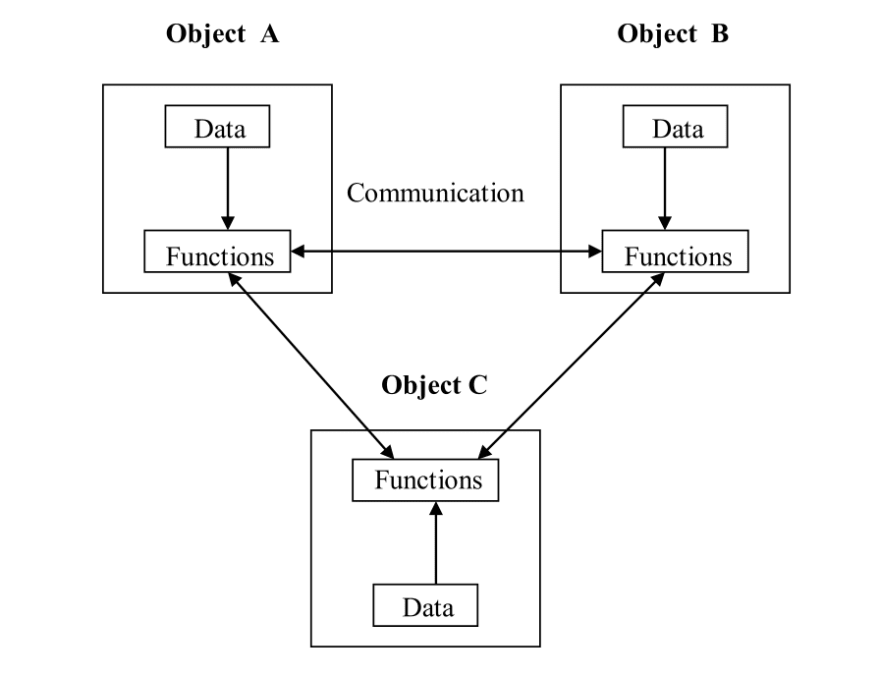 Wrapping data and functions together as a single unit is known as encapsulation. By default, data is not accessible to the outside world, and they are only accessible through the functions which are wrapped in a class. prevention of data direct access by the program is called data hiding or information hiding.

Abstraction refers to the act of representing essential features without including the background details or explanation. Classes use the concept of abstraction and are defined as a list of attributes such as size, weight, cost, and functions to operate on these attributes. They encapsulate all essential properties of the object that are to be created. The attributes are called data members as they hold data and the functions which operate on these data are called member functions.
Classes use the concept of data abstraction, so they are called abstract data types (ADT).

Polymorphism comes from the Greek word “poly” and “morphism”. “poly” means many and “morphism” means form i.e., many forms. Polymorphism means the ability to take more than one form. For example, an operation has different behavior in different instances. The behavior depends upon the type of data used in the operation.
Different ways to achieve polymorphism are:
1) Function overloading
2) Operator overloading

Inheritance is the process by which one object can acquire the properties of another.
Inheritance is the most promising concept of OOP, which helps realize the goal of constructing software from reusable parts, rather than hand-coding every system from scratch. Inheritance not only supports reuse across systems but also directly facilitates extensibility within a system. Inheritance coupled with polymorphism and dynamic binding minimizes the amount of existing code to be modified while enhancing a system.

Binding refers to the linking of a procedure call to the code to be executed in response to the call. Dynamic binding (or late binding) means the code associated with a given procedure call is not known until the time of the call at run time.

A message for an object is a request for the execution of a procedure and therefore invokes the function that is called for an object and generates a result.

Once suspended, sagary2j will not be able to comment or publish posts until their suspension is removed.

Once unsuspended, sagary2j will be able to comment and publish posts again.

Once unpublished, all posts by sagary2j will become hidden and only accessible to themselves.

If sagary2j is not suspended, they can still re-publish their posts from their dashboard.

Once unpublished, this post will become invisible to the public and only accessible to Sagar R Ravkhande.

Thanks for keeping DEV Community 👩‍💻👨‍💻 safe. Here is what you can do to flag sagary2j:

Unflagging sagary2j will restore default visibility to their posts.