I was fascinated with the concept of Blockchain a decentralized trust based system to transfer and verify the data sent over a network. The concepts it was based on was quite simple so in order to understand the concepts involved I decided to create my own blockchain and soon the concepts turned into the story of easier said than done. So let me walkthrough what exactly a blockchain is and how to create one.

First off Blockchain is not Cryptocurrency. Blockchain is the technology behind Cryptocurrencies an analogy would be how Internet is the technology behind Emails. It is the process of maintaining a distributed digital ledger which contains a series of records that are linked together and cannot be corrupted. Well that's a fairly simple definition for a revolutionary technology. It has disrupted a lot fields like medicine, logistics, education and finance (majorly). Let's take a look at the components of a blockchain.

And those are only components that make up the blockchain. What truly makes the blockchain secure are the processes that are involved.

Mining is process of generating a new block and adding it to the network and it involves two processes.

Creating Your Own Blockchain

So now we have brushed up with the fundamentals let's start creating our own blockchain. I have decided to use Socket.io to have a realtime communication system across the nodes. Let's proceed and create the models.

This model pretty straight forward we have certain data as sender, receiver, amount and timestamp.

The important aspect of the Block is the hashValue() and previousBlockHash. The hashValue() is responsible for creating the hash value of the block. It generates a string expression of the block and that is sent to the NodeJS crypto module's createHash() function and hash is created using the specified sha256 algorithm. The generated hash is then stored the next block in previousBlockHash.

In the constructor we are setting the blocks to initially have a single block with index as 0 previousBlockHash as 1 and proof as 0. This is also known as the initial block. But we have a list of blocks passed to the chain we just the blocks with value it received.

The addNode() functions is responsible for connecting the current node with other nodes of the blockchain network. The mineBlock() function adds the mined block to chain and signals other blocks to end the mining.

The checkValidity() method checks the validity of the chain starting from the initial block. We get the currentBlock and previousBlock, we check whether the current block's previousHash to be same as previous block's hashValue. If they don't match we reject. We then check the validity of proof between the current and previous blocks. If they don't match either we reject the chain. We then check the currentBlock to be the previousBlock. We do this till the end of the chain and then return true if no discrepancies are found.

The above mentioned verification of the blocks is what makes the blockchain impossible to break and alter. If an attacker has to change the currentBlocks data he has to change the previousBlocks data as our hash calculation is based upon the data. If the data changes hash changes and therefore he has to do this till the initial block. Another secure aspect comes from the proof generation. If the attacker changes the tampers with the block the proof solution changes so again the attacker has to generate proof all the way from initial to the tampered block which can take a huge amount of time as the calculation of proof isn't very simple and easy.

Proof of Work Generation and Verification

We have wrapper the generation algorithm inside a setImmediate function and wrapper it further under a Promise. Okay now you must be wondering why wrapping it under setImmediate. The reason is I have an environment variable that signals the end of the mining process. I set that variable to true if any other node in the network has finished mining a block. If I wrap the generation algorithm in a while loop it blocks the Event Loop and never checks the status of the environment variable until it has finished arriving at a solution. setImmediate allows it to bypass that as it waits until current process has finished executing before generating for the next time. This allows another module in my program to go and change the status of the environment variable. It also allows me to bypass the call stack limit when calling a recursive function.

Our proof of work problem is simple the hash value of the difference between current and previous proofs must contain six consecutive zeroes. We start with a random number and multiply it by a huge number. Then we verify whether proof satisfies the condition and also we verify whether end of mining has been set. If it satisfies we resolve the value else we try again. We repeat this process till we get a proof.

Great we have the model and generation setup all we need is a working server to orchestrate the action and interact with the blockchain.

The server consists of an express and socket app that are bound to a http server running on a specific port. The /nodes endpoint allows us to connect to another node's socket app and sends the information for the other node to connect back. We also bind socket listeners to the socket connections created. The /transaction endpoint receives a transaction request and broadcasts the transaction information to other nodes. The /chain endpoint lists the details of the blockchain. There is also socket connection listener that actively logs the ID and monitors the connection status between nodes. Finally we make the server listen on a specific port.

The sockets listens to two events ADD_TRANSACTION and END_MINING events emitted by other nodes. The ADD_TRANSACTION listener actively listens to an incoming transaction event triggered by any node on the network. Adds it to the blockchain by calling the chain's newTransaction method.

The END_MINING event is triggered when one of the nodes successfully mine the block. It sets the BREAK flag to true which tells the other nodes on the network to stop mining and start verifying the solution. We parse the stringified chain to back to proper blockchain and call the checkValidity() method of the parsed chain. We also check whether the length of the parsed chain is greater than the current chain's length. If it is a success we go ahead and replace with the new chain else we just reject and hold on to our old chain.

And so we have the code of the chain set up let's run it and see the output.

I used PM2 to spawn to instances of the app running on different ports. So once the two instances are up and running I trigger /nodes endpoint from one of the nodes to connect to another and the output is:

As the output states the two nodes have successfully established a websocket connection between them.

Then I trigger /transaction endpoint from one of the nodes. It then signals the other node about the incoming transaction and both of them add it to their transaction pool.

Then when I hit the /chain endpoint I receive the list of blocks in the chain. 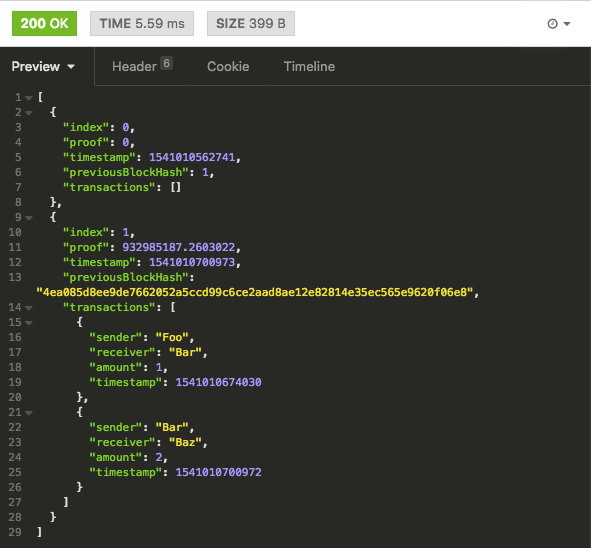 And that's it we have created our own blockchain using NodeJS and Socket.io

What we have created is a simple blockchain. The whole purpose of this post is to summarize the fundamental processes that govern and power a blockchain by actually implementing them. There are concepts like forking of a blockchain that I haven't covered but do recommend to give it a read. There are few other process involved in a blockchain transaction that I haven't covered as a part of this post because there are other articles and posts that go in depth about the blockchain architecture. I have also committed my code to GitHub so you can clone the repository and play around by adding new processes ;).

Finally, when you want to learn about something try to learn the concepts and implement them on your own this will help you gain much deeper understanding and knowledge about the technology involved.

Fresh – Is this new Javascript framework the Node-killer?

Once suspended, sadarshannaiynar will not be able to comment or publish posts until their suspension is removed.

Once unsuspended, sadarshannaiynar will be able to comment and publish posts again.

Once unpublished, all posts by sadarshannaiynar will become hidden and only accessible to themselves.

If sadarshannaiynar is not suspended, they can still re-publish their posts from their dashboard.