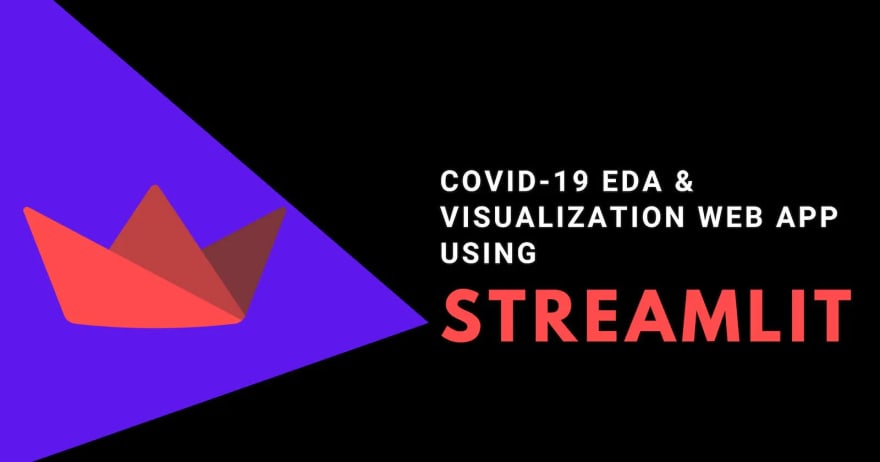 With less than 100 lines of code, I made a web app with just under 100 lines of code using Streamlit - used to build a nice and interactive frontend, Plotly - a library to visualize data, and Pandas, an open-source data analysis and manipulation tool built on top of the Python programming language.

The web app is all about Exploratory Data Analysis and Visualization of Covid-19 data from India in the year 2020.

Well, I found the data on Kaggle. You can download any kind of dataset for free on Kaggle.

Let’s get back to the track, we gonna have a nice interactive user interface with an interactive sidebar where we’ll have some user inputs to select the type of graphs to visualize data.

Last but not least, we gonna display reports like which state has the highest cases or lowest cases, etc.

1. Setting up the project

First of all, make sure Python is installed on your system.

Now open up your favorite IDE or Code Editor and start an empty project.

Make a directory and then fire the terminal in the code editor or IDE, and then install the necessary libraries which are used in this project.

Now check if the streamlit is successfully installed on your system just run the following command in the terminal.

If everything is well and good then head over to the next step.

To clone the project head over to my Github profile and copy the repository URL.

Visit this repository to copy the URL and then run the following command in the terminal.

If you don’t know git then don’t worry, simply download the project as a ZIP file and extract it to the directory.

If every step is carried out successfully then proceed to the next step.

Let’s start by dividing the code into smaller sections.

Line 1–4 — Importing the libraries which are used in the project.

Line 6–12 — By using streamlit’s title and markdown feature, we are setting up the title and some descriptions about the project.

Line 13–19 — In that portion, we are inserting the banner image using streamlit’s image feature and reading the Covid-19 data using Pandas library, and then finally displaying it on the web app.

Line 20–29 — Creating a sidebar and select boxes in which users can select different graphs and plots. Additionally sorting the columns and setting the default values for the x-axis, y-axis, and color parameters

Line 32–35 — Now creating the select boxes for the x-axis, y-axis, and color labels using st.sidebar.selectbox and assigning the default values to them which we created just above.

Line 38–63 — Setting a heading for visualization and creating a function to show different-different graphs. Here, I created a function visualize_plotly(graph) which takes graph and declared if-else conditions in which if the user will click on Bar Graph then it will visualize data on the bar graph and the same goes for other graphs also. Then creating a variable figure to call the function visualize_plotly() and passing the graphs variable from line 23.

Then using st.plotly_chart(figure) to display graphs.

Line 65–97 — Creating a report section where we created buttons st.button using streamlit and displayed them on the web app.

Cool, we are at the end of this project. Now let’s see how our web app looks like.

Run the following command in your terminal

This web app is based on the older stats, you can try it with a newer dataset on Covid-19.

It is a beginner-friendly project or intermediate level to some extent, but you can take it to an advanced level by adding different datasets or adding more graphs.

✅Implement a custom deep learning model into the Flask app for image recognition.

✅How to use async/await in Python.

✅What is the Python enumerate function and how to use it?

That’s all for now

Sachin
10 of the coolest developer T-shirts from devshirt.club
#watercooler #codenewbie #career #writing
Should Developers Specialize or Generalize?
#career #beginners #webdev #codenewbie
Why I Decided to Invest in My Portfolio as a Junior Developer
#webdev #career #codenewbie #help

Once suspended, sachingeek will not be able to comment or publish posts until their suspension is removed.

Once unsuspended, sachingeek will be able to comment and publish posts again.

Once unpublished, all posts by sachingeek will become hidden and only accessible to themselves.

If sachingeek is not suspended, they can still re-publish their posts from their dashboard.

Once unpublished, this post will become invisible to the public and only accessible to Sachin.

Thanks for keeping DEV Community 👩‍💻👨‍💻 safe. Here is what you can do to flag sachingeek:

Unflagging sachingeek will restore default visibility to their posts.