When I first started working with TypeScript, I quickly found myself questioning the use of type and interface in regards to providing type safety to my code. What is the difference between the two? When should I use one over the other? I decided it was time to get some answers.

After a bit of research, I realized that the two are more similar today than they have ever been. However, there are still some differences that are worth mentioning. Let’s talk about it!

types and interfaces at a high level

Before we take a look at the similarities and differences between a type and an interface, let’s first get a good mental model of what the two were intended to achieve in the first place. 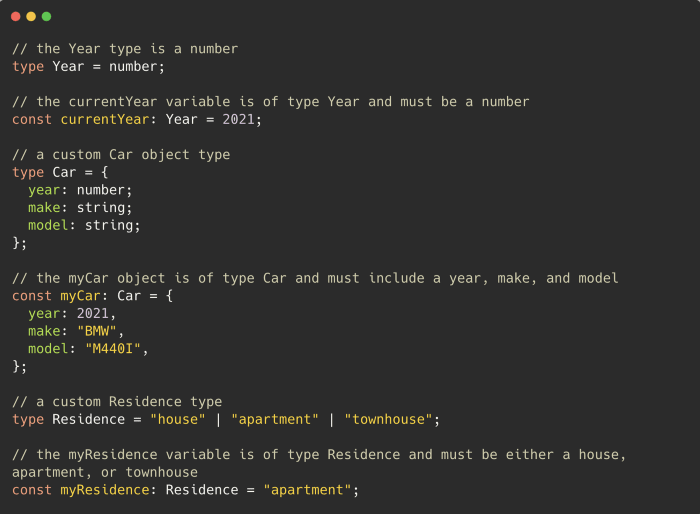 The interface keyword in TypeScript on the other hand is a way for you to describe only what your objects are going to look like. Let’s see an example of interface.

Right off the bat, you might think that the type keyword is the more flexible choice of the two when it comes to type safety. Hold that thought. Let’s take a look now at how the two are similar.

Let’s say I wanted to provide some type safety for an object, one of the most common use cases for using a type or an interface. Turns out they both work pretty much the same, and the syntax is almost identical. 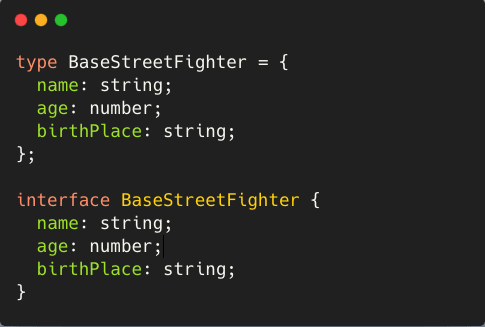 What if I wanted to combine object properties from one type or interface into another? We can do that too for both. 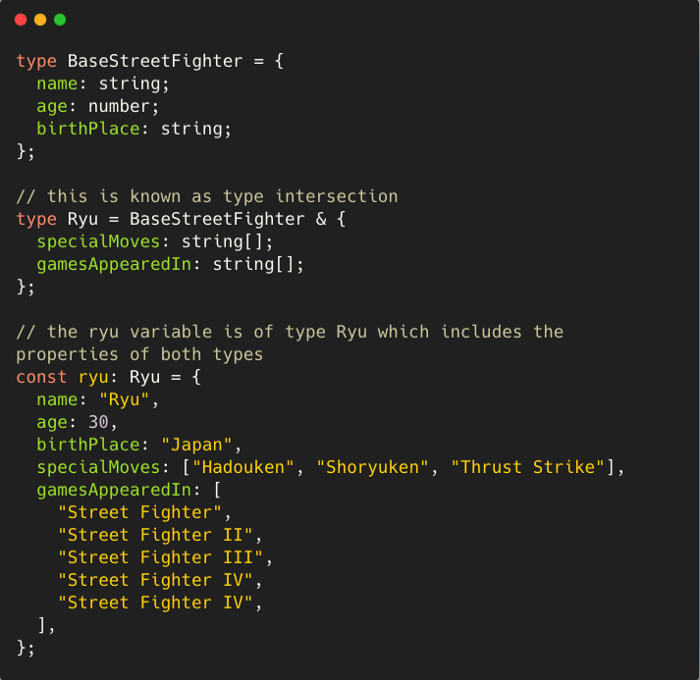 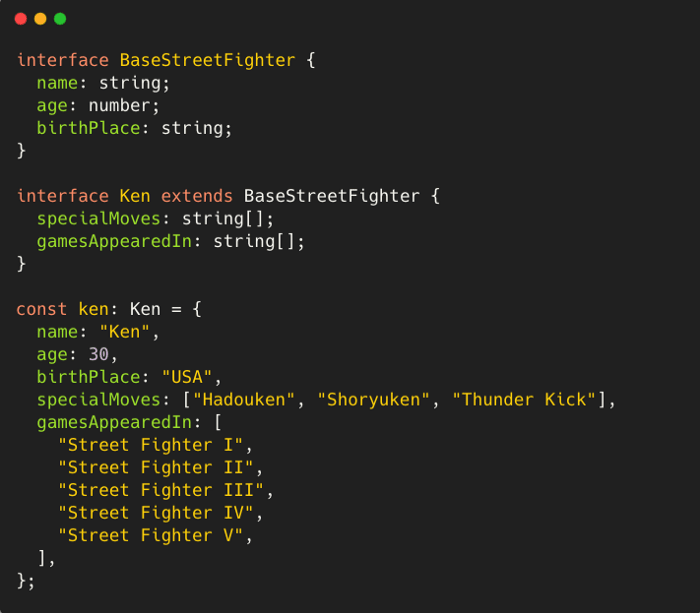 I personally prefer the extends syntax as it feels a bit more natural to me.

Want to provide some type safety to your functions? This is also possible with both a type and an interface. 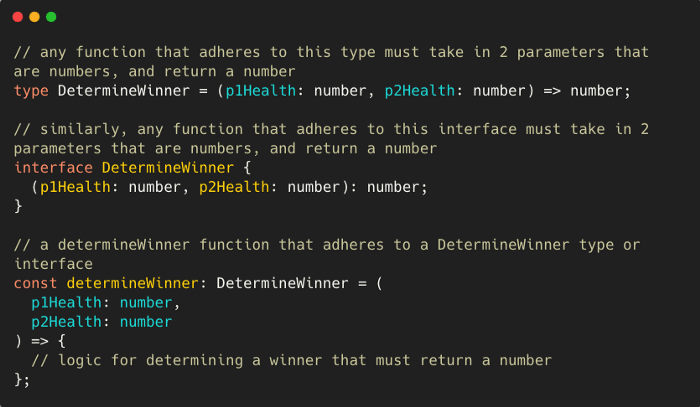 I personally prefer using a type here since it reads a bit cleaner, but totally up to you!

Finally, if you wanted to create a class that adheres to a certain type safety contract provided by a type or an interface, you would be able to do so just fine with both. 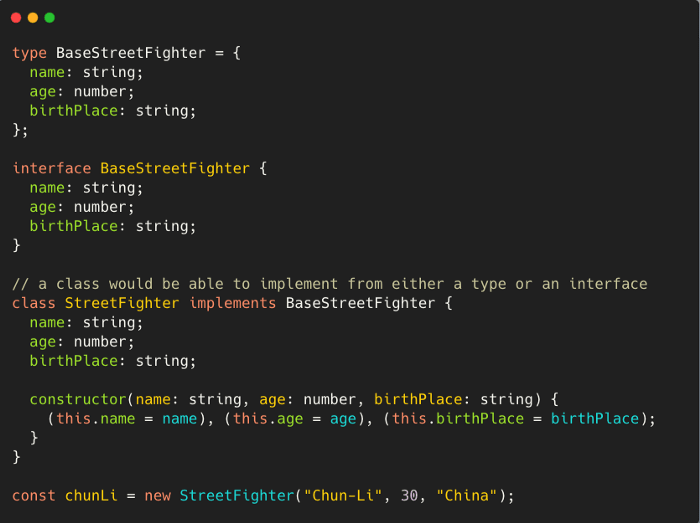 That covers most of the similarities of type and interface, let’s now take a look at the differences.

Starting with type, there are a few things that are possible that you wouldn’t be able to do with an interface. For example, If you wanted to setup a type alias for just a single core type (e.g. string, number, boolean etc.), this is something that is possible with type but not with interface.

Another possibility with type is that you are able to create a bit more custom type aliases by using unions. 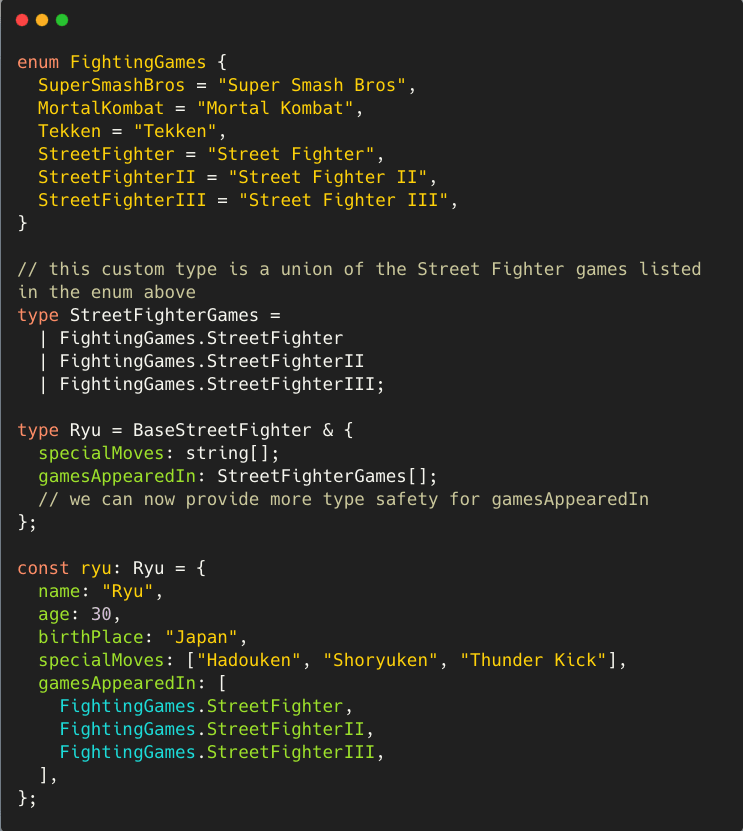 This pretty much sums up the unique offerings of type. While there may be some more advance features that type offers that I missed, this should cover the most common use cases.

Moving on to interface, there is a unique feature called “declaration merging” that you aren’t able to do with a type.

To summarize, both type and interface provide some nice type safety options for you to choose from depending on your needs. When it comes to describing object shapes which is the majority of my use cases, I prefer to go with an interface. I personally like that an interface was designed specifically with this purpose in mind, and is very intentional about it.

However anytime I need to provide type safety for a function, or need a bit more customization for a type alias such as the case with unions, I prefer to go with type. Both are lovely options for providing type safety, and you really can’t go wrong with using either one!

The Interview Sage - May 15

You have never seen this product card before

saad ahmad
javascript test automation engineer turned backend software engineer.
Create a portfolio card with React, ChakraUi, and framerMotion
#react #webdev #showdev #productivity
You're on FIRE! 🔥...in the WRONG way: a story about burnout 😵
#mentalhealth #motivation #watercooler #discuss
What you should know about Reactjs if you are a mobile developer
#react #javascript #mobile #webdev