In this post you will learn how to set up an Azure Kubernetes cluster using Terraform.

NOTE: This article assumes some basic knowledge of cloud concepts and the Microsoft Azure platform

Terraform is an Infrastructure as code tool that allows developers and operations teams to automate how they provision their infrastructure.

Why write more code for my infrastructure ?

Before diving into Terraform you need a brief understanding of

Yes Terraform uses a it's own configuration language, this may seem daunting at first but it's quite easy. Here's a quick peek at what it looks like.

Your infrastructure in Terraform are represented as "resources", everything from networking to databases or virtual machines are all resources.

This is exactly what the resource block represents. Here we are creating an azurerm_resource_group as the name implies , it's a resource group. Resource groups are how you organize resources together, typical use case would be putting all your servers for single project under the same resource group.

Now that you have an idea of what Terraform configuration looks like lets dive in.

Once you have all that setup, login to your Azure account through the command line using the following command

Next clone the sample project.

Before we begin we need to run terraform init. This would download any plugins that the Azure provider depends on.

Taking a quick look at our folder structure you should have something like this.

Starting from the top lets look at main.tf

First we declare what Provider we are using, which is how Terraform knows what cloud platform we intend on using , this could be Google cloud , AWS or any other provider they support. You can learn more about Terraform providers here. Its also important to note that each provider block is usually in the documentation so you don't need to write this out each time.

Next we define a module block and pass it the folder where our module is located and a few variables.

Modules in Terraform are a way to separate your configuration so each module can handle a specific task. Sure we could just dump all of our configuration in main.tf but that makes things clunky and less portable.

Now lets take a look at the cluster folder in modules directory.

Lets take a look at cluster.tf

in the first part of the part of the configuration we define a resource group for our cluster and cleverly name it "kubernetes-resource-group", and give it a location which would come from a variable which is defined in variables.tf. The next part are the actual specs of our kubernetes cluster. First we tell Terraform we want an azure kubernetes cluster using resource "azurerm_kubernetes_cluster" , then we give our cluster a name , location and a resource group. We can use the location of the resource group we defined earlier by using the reference name aks-resource plus the value we want. In this case it's the location so we use aks-resource.location.

There are two more blocks that we need to pay attention too. The first being default_node_pool block and the second linux_profile.

default_node_pool block lets us define how many nodes we want to run and what type of virtual machines we want to run on our nodes. Its important you pick the right size for your nodes as this can affect cost and performance. You can take a look at what VM sizes azure offers and their use cases over here. node_count tells terraform how many nodes we want our cluster to have. Next we define the VM. Here I'm using and A series VM with 4 gigs of ram and two CPU cores. Lastly we give it a type of "virtual machine scale sets" which basically lets you create a group of auto scaling VM's

The last block we need to look at is linux_profile . This creates a user we can use to ssh into one of our nodes in case something goes wrong. Here we simply pass the block variables.

I intentionally didn't go over all the blocks because most times you don't need to change them and if you do the documentation is quite easy to go through.

Finally lets take a look at variables.tf as you might have guessed this is were we define all the variables we referenced earlier.

to define a variable we use the variable keyword , give it a name and within the curly braces we define what type it is, in this case it's a string, an optional description and a default value, which is also optional.

Now we are almost ready to create our cluster but first we need to generate an ssh key , if you remember we created a variable for it earlier. if you have an ssh key pair you can skip this step

you can leave everything as default by pressing enter. Next we export the key into an environment variable.

Notice the TF_VAR prefix before the name of the actual variable name. This so Terraform is aware of the environment variable and can make use of it. You should also note that the variable name should correspond to the one in variables.tf.

If every thing looks good we can apply our configuration using:

Terraform will prompt you one last time to make sure you want to proceed enter yes and watch the magic happen. Once the resources have been provisioned head over to your azure dashboard a look. You should see something like this: 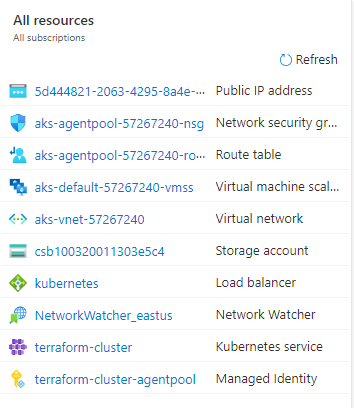 As you can see, Terraform configured everything we needed to spin up a cluster, and we didn't have to specify everything. Click on terraform-cluster and lets make sure everything looks good.

And there you have it, we deployed a kubernetes cluster with our desired specifications and Terraform all did the heavy lifting.

Once you are done it's as easy as running terraform destroy to tear down all the resources you have just provisioned.

If you are wondering where to go from here. Here are somethings you can try.