Google Cloud Build (GCB) is a building system provided by GCP. Considering all the competitors like GitLab CI, CircleCI and Travis CI, GCB is definitely not a common option for building CI CD pipeline.

In fact, I have tried to test GCB in my work at the early stage of adoption in GCP. The pros of GCB is definitely a full integration with GCP's resources. If you are using GCP and have no preference at the CI pipeline platform, I highly suggest you to try it out.

Circling back to the GCB's pipeline, all the configurations are written in JSON or YAML format. Here is an example for the GCB configuration.

Look intuitive? Yeah! It looks intuitive. It only has the following rules in the pipeline sequence.

So, what is the problem with GCS? The issue here is that the UI itself does not provide you with a clear view on how the steps are depended on each other. Here is an example. 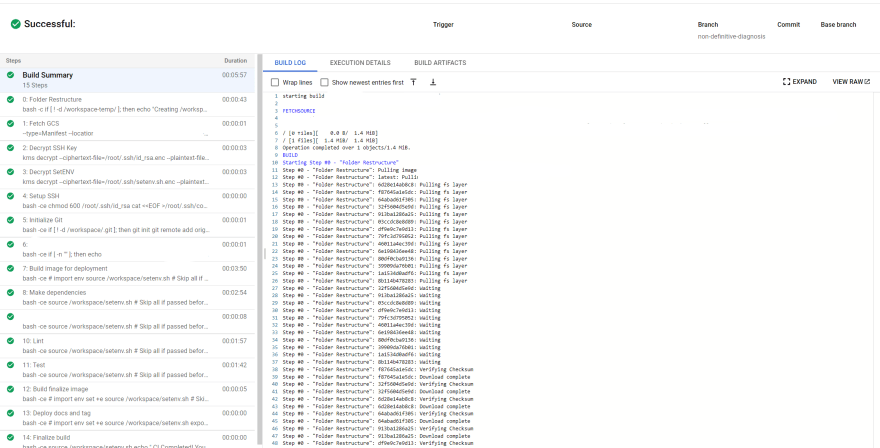 Here, you can see the steps are showed in sequential manner. You cannot observe if this build has been executed in parallel.

Therefore, I have tried to build a simple CLI to make sure we can understand how the steps are depended.

For the current version of Google cloud build, it supports the async process with the variable waitFor. With the growth of complexity of your pipeline, it will be hard to maintain the async flow. Unlike Jenkins and CircleCI, there is no visualizer for your pipeline. This application aims at visualize the pipeline and help the developers to debug their cloud build.

From the Google docs, there are a few rules for the async process.

In this project, I built the CLI with cobra and graphviz. The logic is so simple that it will intake the JSON or YAML file. Then, it parses the configuration and turn the pipeline into a graph. Finally, the graph can be visualized by graphviz.

You can get the CLI easily with the following command.

Go to the link and check it out if you are using GCB in your company or personal project. It definitely helps you to understand how you have configured your pipeline in GCB.

Please feel free to open an issue if you have configured out any features you want in the GCB Visualizer!

Share Your Notes Online: Publish Dendron with Netlify and GitHub