There's a lot of disagreement when it comes to merging the developer and the scrum master role, and the main question is "How is that scenario beneficial for the final product?".

I am part of a three member team, which consists of two developers, one scrum master and one product owner. Yes, you've read it right - three individuals, four jobs. My team works on a project where we have that scenario. One person (in this case I) is both a developer and a scrum master.

As I was part of the project from the very beginning, and our third colleague was fresh on the team, I became the new scrum master. I took some courses on a very short notice, expanded my knowledge of the scrum master role, and started a new phase in my career.

As time went by, through dealing with both roles, I had some positive and some less positive experiences. Here are the pros and cons, from my point of view:

There were some downsides for me, during the process of juggling both roles at the same time. I would mention just one because I think it's the only one that applies to everyone; others vary from person to person.

One can not be fully devoted to both roles - Through this time, I had difficulties with the clear separation of my duties so I could do my best in both roles. Sometimes there is a conflict of interest between scrum master and developer's responsibilities. When the team is under pressure of completing the sprint, I catch myself giving priority to my developer tasks. I focus on those, while I should also make sure that the rest of the team is committed to tasks, with all impediments removed. 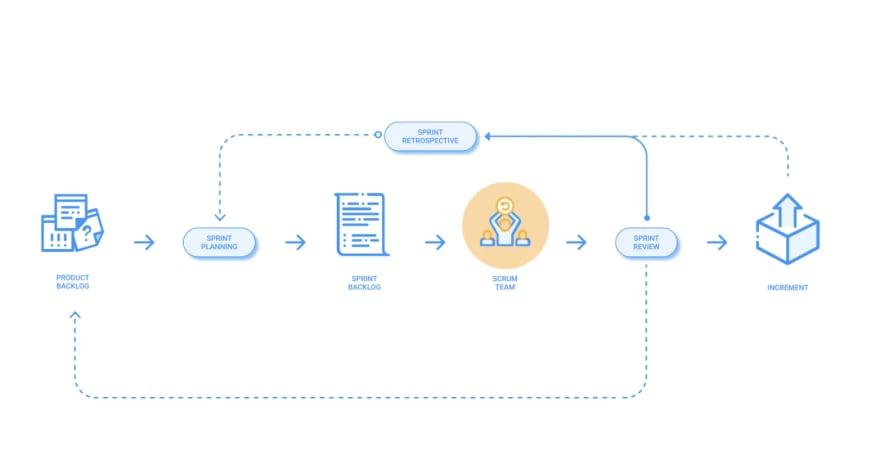 Pros and cons included, the benefits of being a developer and a scrum master as well, depending on several facts:

I think a smaller, already organized team, of 2-3 members, can have better results with merging the roles of developer and scrum master. It is easier for that person to contribute as a developer, as well as a scrum master. This way, the pros outweigh the cons.

Getting familiar with the SCRUM framework and agile software development, I continued my career as a Product Owner. Once in the new role, I started realizing what exactly my responsibilities as a Scrum Master should have been.

While the Scrum guide advocates separating the Product Owner (PO) role from the dev team, I was unknowingly mixing the two. I lacked the experience needed to transfer my theoretical knowledge into practical use.

The PO is not and should not be responsible for sprint items, scope and timeframes, estimated deadlines for delivery, and communication and cooperation issues within the team. The problem with misunderstanding their responsibilities occurs when the in-house PO had been a Scrum Master (SM) before becoming a PO.

Besides that, as the team grew, the project and its requirements grew with it; thus the SM had more duties on hand. This led to a developer having to take over the SM position part-time, which reflected negatively on the team's health and efficiency. We began questioning if one person is well-equipped to take on two roles at the same time, and if the combination of DEV and SM is the right path to take.

Different projects, teams and their sizes have shown me that it is unrealistic to have high expectations from role-sharing combinations. However, after collecting feedback from the team and tracking satisfaction metrics, I still believe that implementing double roles is a good decision.

Let’s consider some combinations of roles that could work well. As a rule you should not have a PO be a Scrum Master because those are two opposing roles. For example, QA engineers and dedicated UX/UI designers could be efficient Scrum Masters if they are full-time team members. Both roles should have a good perception of the product and understand the business logic, primarily because of their main responsibilities. They are always informed on the development plan and priorities, so they can easily cover the SM duties that include delivery of sprints on time and according to the acceptance criteria. Simultaneously, QA and UX/UI roles require constant communication and cooperation with other team members, so they can pass the info to the PO.

The most important lesson for us has been that the SM role should be taken seriously especially if the person has a double role within the team. Sufficient time should be dedicated to the SM responsibilities because neglecting them could negatively affect the teamwork efficiency and the quality of the end product.

Original blog post: ​Pros & Cons of being a Developer and a Scrum Master

Tips and Tricks to make you into a Discord Master