Pandemic. That’s a terrible word. It starts with P. It means disease that’s everywhere. Means that you have to stay away from friends and public places and fun things. Means you have to fight tooth-and-nail for scraps of toilet paper. Maybe.

But, do you know what else starts with P?

That’s right. We will not lie down and let this Pandemic get what it wants. COVID SHMOVID. We will still engage our minds and overcome challenges as a team and as a family in a way that is both satisfying and time-consuming.

So that is what we did this weekend. Here’s the write up of the solutions for our team: Team Puzz Lightyear.

Spoiler Alert: This is a write up of the solutions to CS50’s Puzzle Day 2020 puzzles. By definition it will contain those solutions. 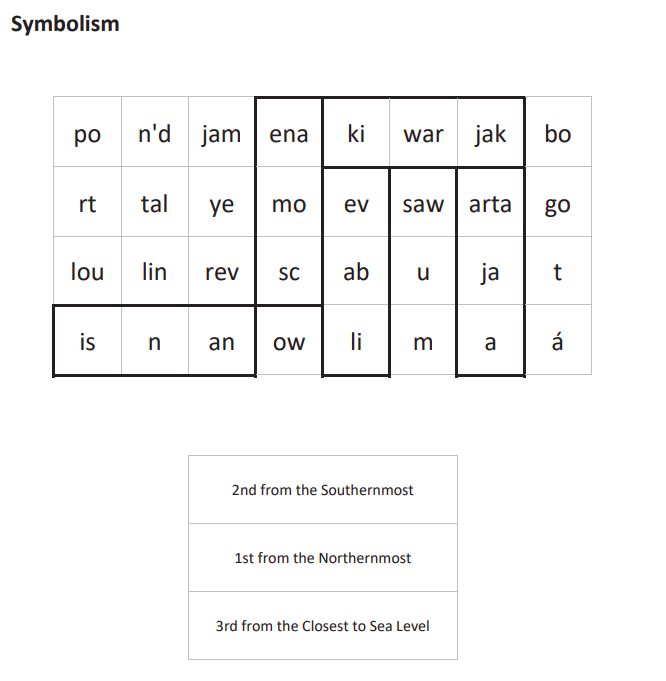 This was the first puzzle we looked at, and it was the last thing we saw as we went to sleep on Sunday night in frustration. What started out as a quick couple of bursts of inspiration ended with us unable to make the final connection.

If you don’t believe me, here’s Jenny’s work on the subject. 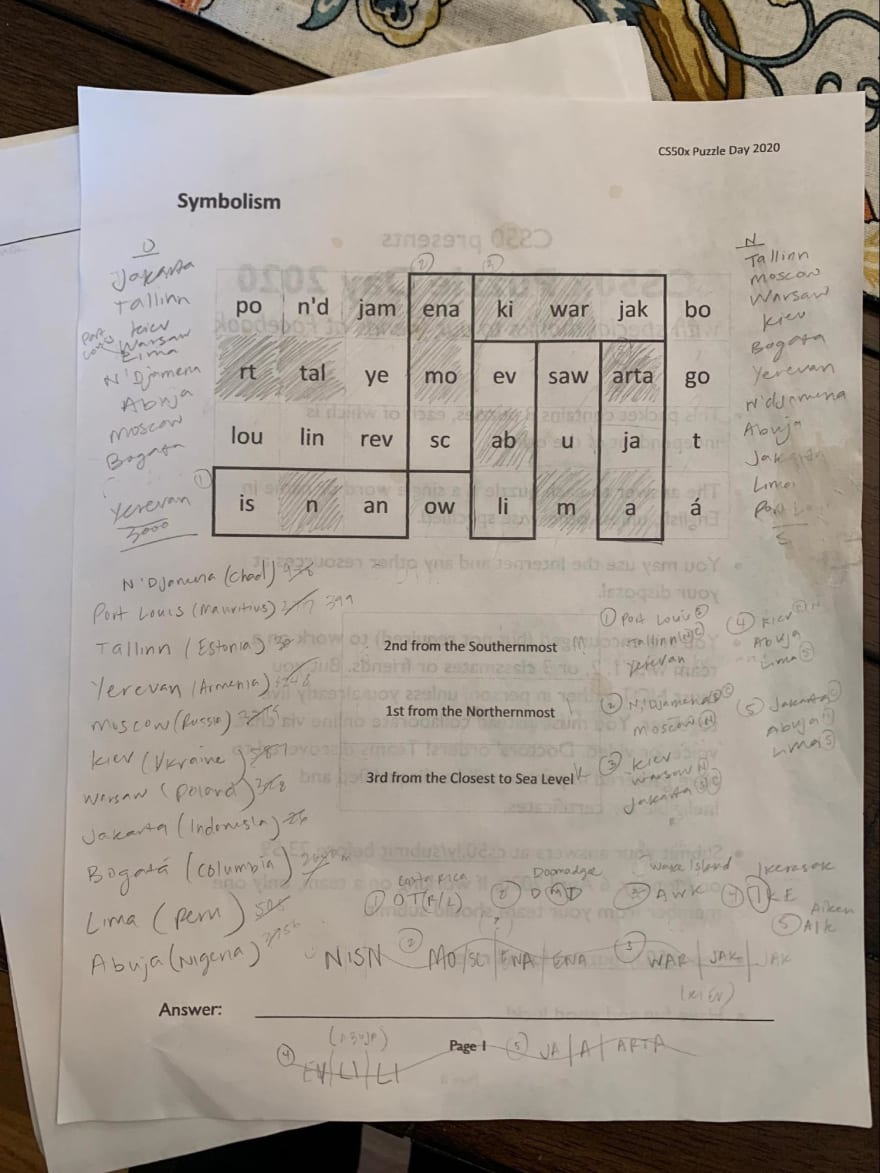 Nothing. Oy. You win this one, Puzzle Day.

“You know,” Jenny mused as we turned off the light to go to sleep, “the real symbol of a place is its flag.”

“Well, how are you going to make a word with a bunch of flags?” I asked.

“I don't know, what's the flag for Mauritius (the country containing Port Louis)?”

I reached for my phone. “Looks like... four horizontal bars of color. Matches the four stacked boxes in the clue.”

Jenny got quiet. “What about Ukraine (where Kiev is)?”

Click. She turned her light on and ran into the kitchen, and came back with her puzzles and some markers.

We ended up with this: 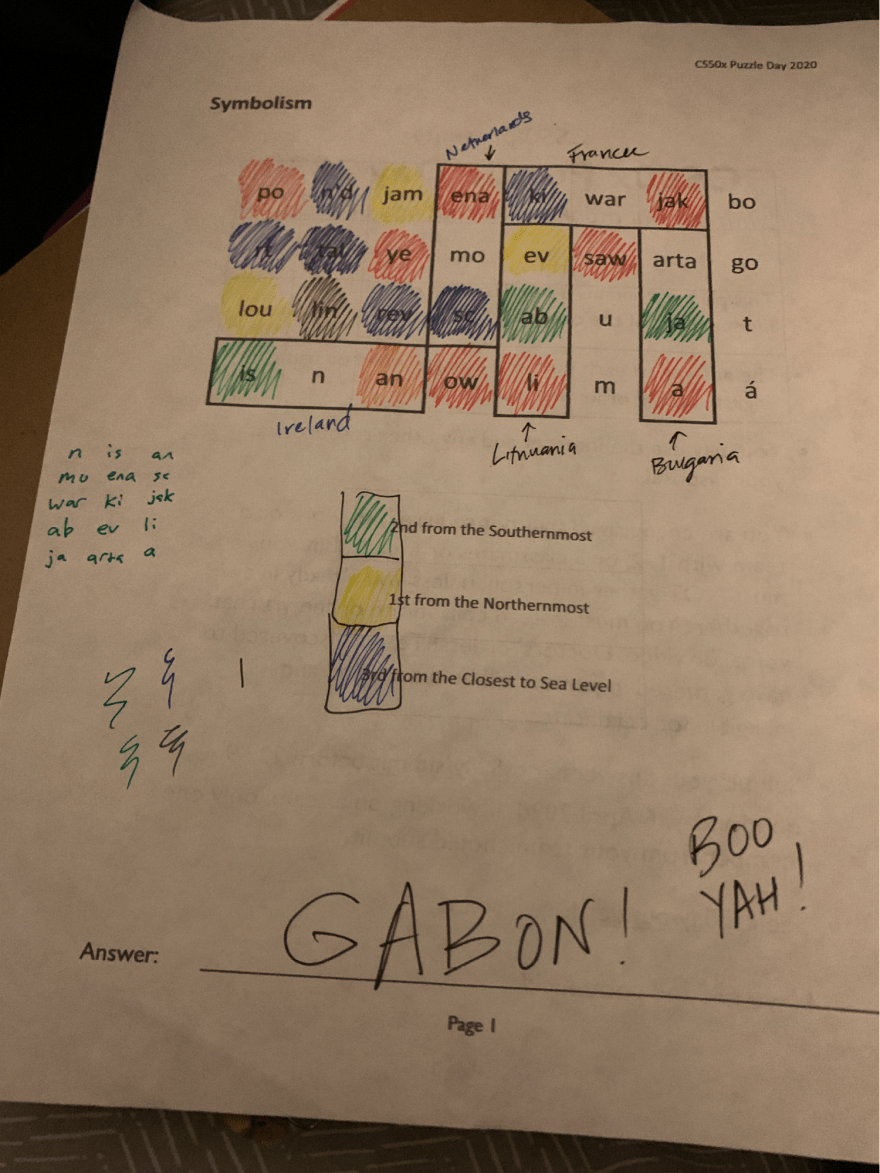 “That's Ireland’s flag in the lower left!” she shouted. “And Netherlands, and France!”

The others turned out to be Lithuania and Bulgaria. And now we had somewhere to go with the clues at the bottom. Doing some more research and some more coloring revealed the final flag.

Puzzle 2: Secret Message from US 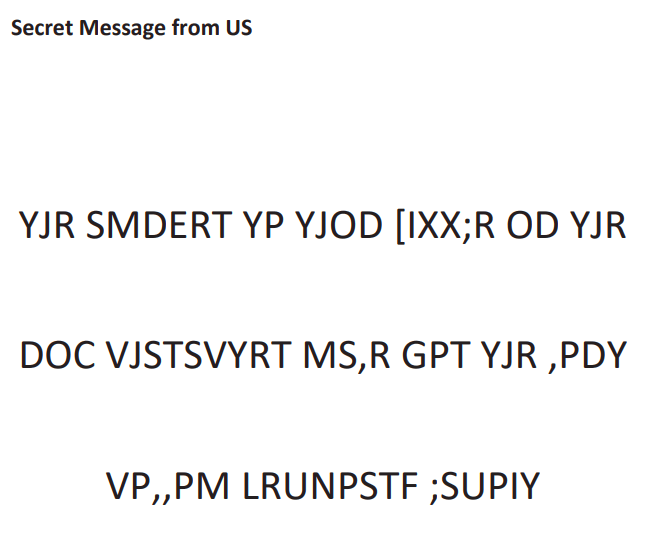 This was a relatively early victory for Jenny and Steve. At first glance, it’s very clearly a message in some kind of cipher. The capitalized “US” in the title had me thinking maybe some kind of Caesar cipher shifting U to S or vice versa? But the punctuation! How in the heck do you shift punctuation? 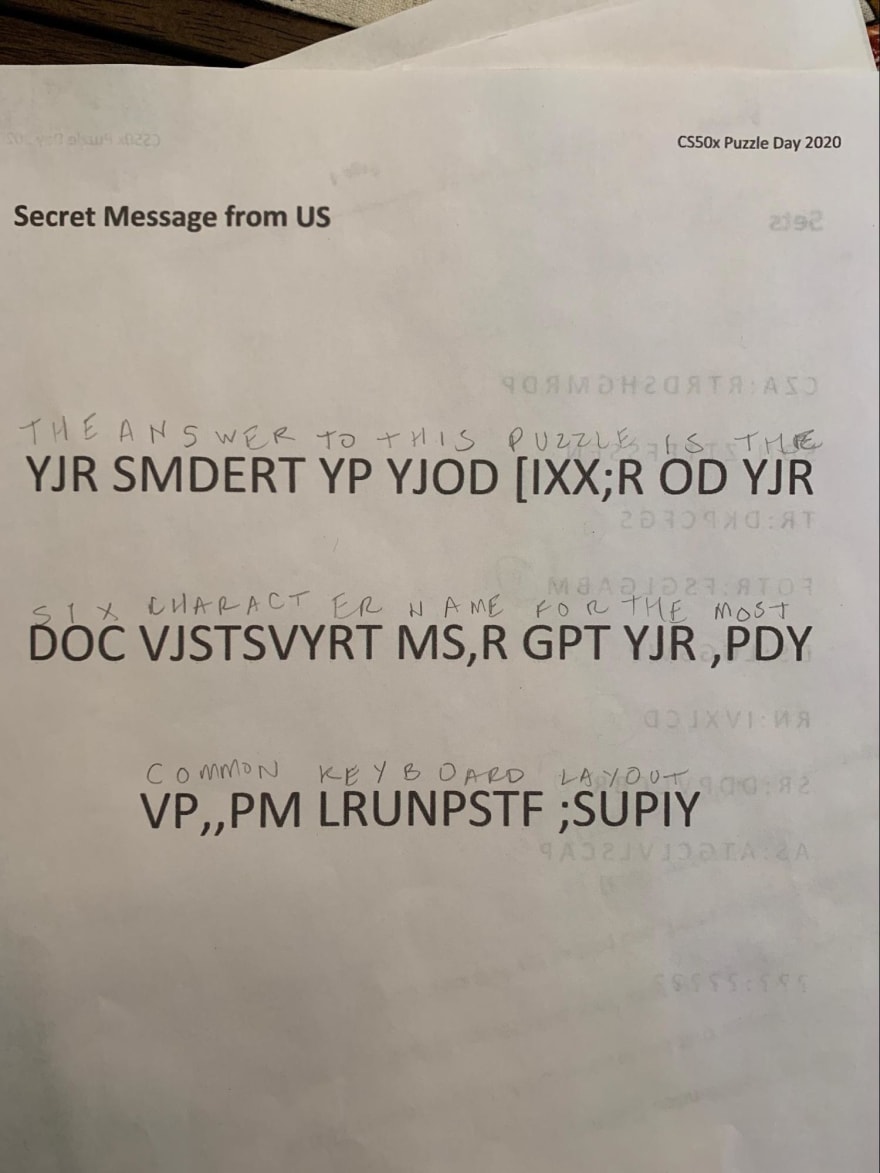 It was actually a “keyboard cipher.” Each letter was one away from the encoded letter on a standard American QWERTY keyboard. Which, in fact, was the final answer. 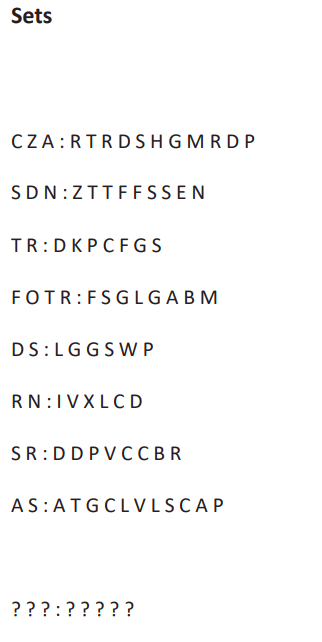 This was probably the puzzle where we saw the most simultaneous teamwork. Armed with the knowledge that sets are mathematically defined as “a group of things,” we noticed the line:

Roman numerals! Each of those letters was a Roman numeral. And then we were in business, trying to come up with what each of the other categories could be.

I guess “M” could be missing from Roman numerals? Aha! Now we have a way of getting from Sets to the coveted one-word answer to the puzzle!

At this point, we hit two snags. First, we became very stuck on the remaining Sets—especially CZA (Catherine Zeta Aones? Confederate Zombie Army?). Second, we realized that there weren't quite enough ?’s to make PEMDAS. We were one short.

Which was totally fine! The missing one had to be the final answer! Sweet. Now to solve the rest. (Common Zoo Animals?)

Ali solved AS: Astrological signs with either Scorpio or Sagittarius missing.

That was enough to get us to ?OO:PEMDS, making the missing one “addition.”

P.S. After a few more minutes and comical but unlikely guesses, the remaining set revealed itself to be Chinese Zodiac Animals with Ox missing, letting us all relax and take a nap. 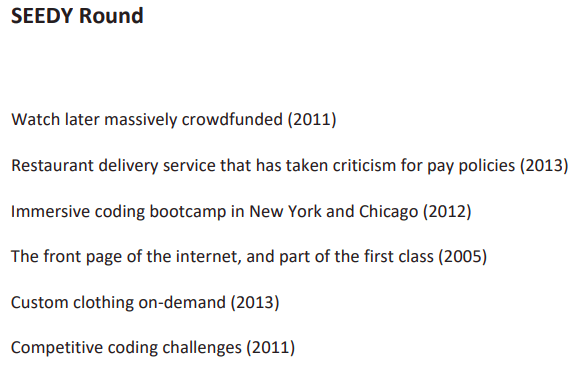 There wasn't a whole lot to this one. I feel like we stumbled around, made our best guesses and came up with an answer that seemed reasonable.

We came up with three companies off the top of our heads right away:

I took us on a wild goose chase thinking that the watch company was Misfit (they were funded on Indiegogo). Jenny tracked down another company: DWISS.

At this point, Steve noticed that they all had a pair of double letters—just like SEEDY in the title? Taking the double letters so far gave us SOLD??, which seemed believable enough to run with. It is CS50 Puzzle Day, and we've done more with less, after all.

We found a few clothing companies that fit the bill, and TeePublic had a pair of E’s. Combining that with the fact that I knew about HackerRank (even though the founding date we found didn't line up), and that it spelled SOLDER all together, which was a word that is vaguely tech-startup-related, we declared a shaky, but good enough victory.

Actual Answer: BOLDER. The watch company ended up being Pebble, due to the connection that all the companies were funded by Y-Combinator, which means Steve was originally partially right! 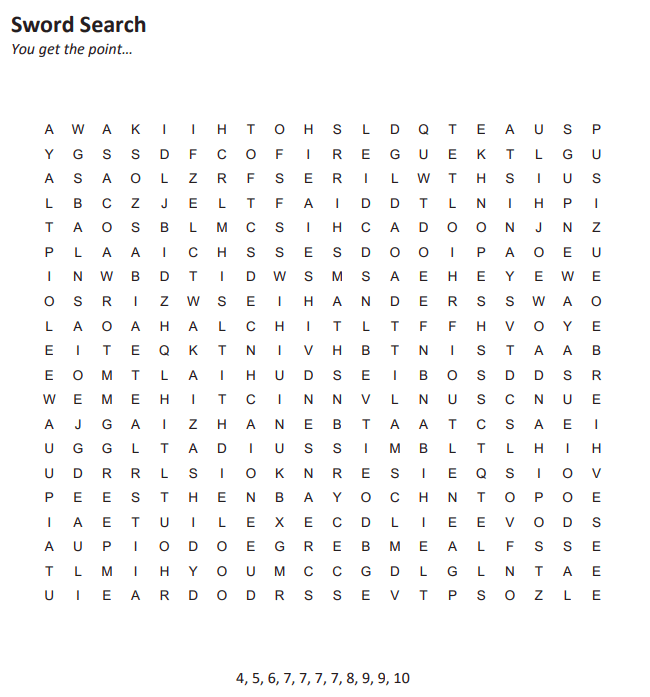 OK. I am going to go ahead and classify this puzzle as the largest total waste of our time in the entire set of puzzles. Possibly ever.

Make no mistake, this was a good puzzle. Perhaps even a great puzzle. We started out very stumped, just staring at the numbers and letters with no luck. Jenny ran it through first, finding every word she could find. Steve suggested that “You get the point…” in the subtitle referred to coordinate points and that the comma-separated numbers at the bottom were X, Y pairs. That is, until we realized that there were 11—an odd number.

And then, more than a day later, Steve mentioned that he had found “GLADIUS.” Sort of. He found “Tadius.” When I took a second look, I realized that there was a “GL” before the “T” in “TADIUS.” We had a sword name in the word search, as the title promised, with an extra letter. And, by this point, as everyone now knows, extra letters point to puzzle answers. We were in business.

In the midst of chasing our crawling baby around the house, improbably, I spotted a word that was almost “ZWEIHANDER.” I didn’t know that zweihander was a word before that moment, but I’ve done just enough Duolingo to know that it means “two-hander” in German, and that seemed like a sword name. Factor in that it contained an extra “S,” and we can count it as a 10-letter clue!

After that, we spent a mind-numbing two-and-a-half hours staring alternately at the word search and Wikipedia’s list of all the swords ever. And we found them, piece by piece. 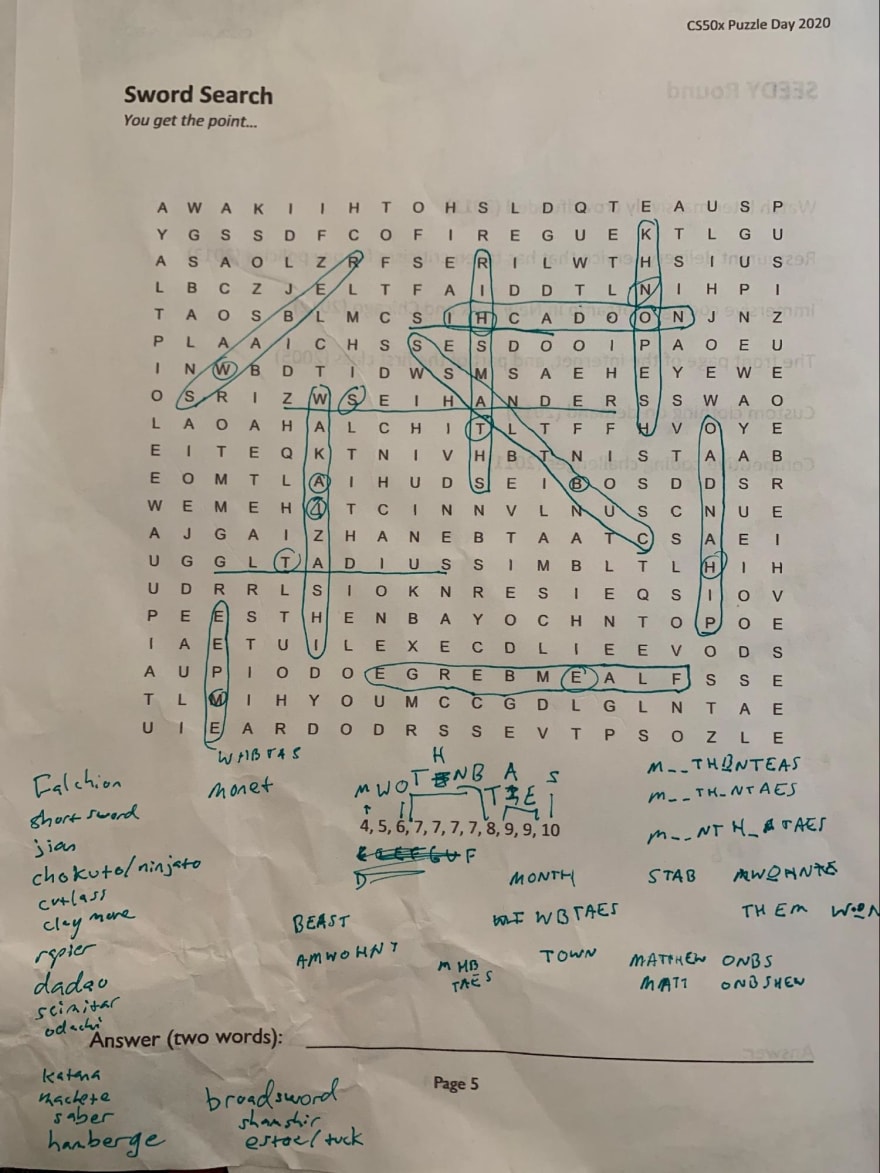 What this left us with was this brick wall: TSNAMEHTBWO

De-scramblifying got us nowhere. We got things like STAB THEM NOW, STAB TH WOMEN, NAME TWO BTHS, NAME BOTH TWNS, and more. Nothing definitive, but nothing proving this was the wrong path. And that's where we stopped.

Actual Answer: CROSS SWORDS. After watching the solution video involving a bunch of hilts and referring to the letter just past the “tip” of the sword, I'm content in the knowledge that I couldn't have possibly made that logic jump, and that we got as far as we could.

Puzzle 6: Putting It All Together 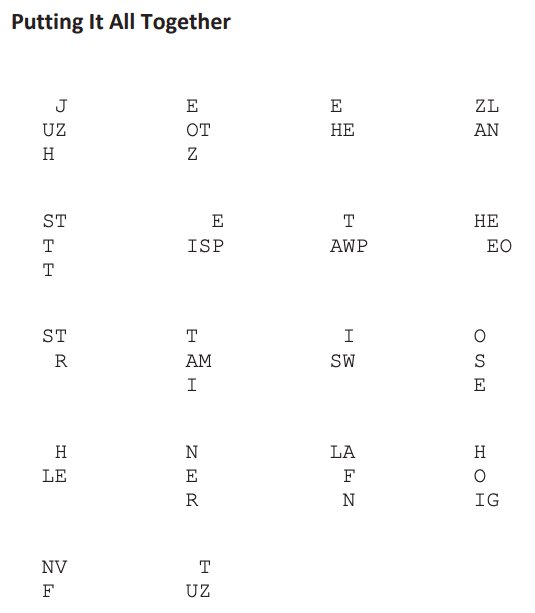 It was late. The baby was asleep, and we had spent a long day puzzling. Most of the California crew were done for the day, and the Nebraska team was likely asleep (or had muted our crazed puzzle chat for bedtime).

I pulled a beer out of the fridge. “I'll just take a peek at one more, see if something shakes loose,” I thought.

My eyes glazed over as I stared at the page of letter jumble. Having spent many nights while putting the baby to sleep playing sudoku, I started to notice a 3x3 grid situation with each of the groups. Not all groups used all the columns or rows. Some columns were used only rarely.

Maybe I could squash the grids together or overlay them somehow. After a few minutes of typing groups of letters that ended up being meaningless, I gave up. A dead end. But I felt like I should still be able to fit them together somehow. Like... Tetris!

I looked at the shapes. And looked again! The frenzied Tetris music started crescendoing in my head. The shapes the letters made were all classic, much-loved Tetris pieces! To the scissors!

I got exactly one row of shapes into cutting them out before I remembered why I was bad at crafts and that this was for the birds. To the computer!

I got exactly 88 lines and only slightly less than 88 error messages into a program to solve the Tetris puzzle for me before I realized that this was a more complicated problem than I had thought. To the spreadsheet!

Ah yes. This was better. I scaled the columns and rows to be little Tetris squares with letters in them and colored them in different colors. Maybe just a few minutes of sliding shapes around before bed. 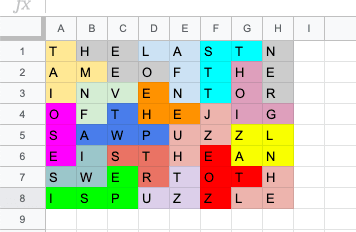 Puzzle 7: A Poem from Hannah 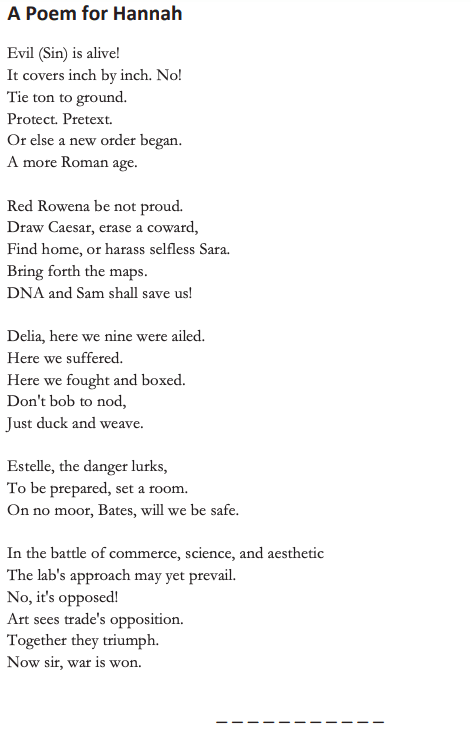 In the heat and flurry of solving #3, some of us branched out a little bit to start to work on the other puzzles. I sent out the message, “The first line of 7 is a palindrome. So is Hannah in the title.” Ali messaged back, “I was looking at that one. There are a lot of lines that are palindromes except for one letter. But I’m no good at these things.” This was followed in a couple of minutes by this picture.

So. That’s that one handled then. Puzzles are fun when your team is made of geniuses!

Puzzle 8: Stretch Out and Break Up to Get In 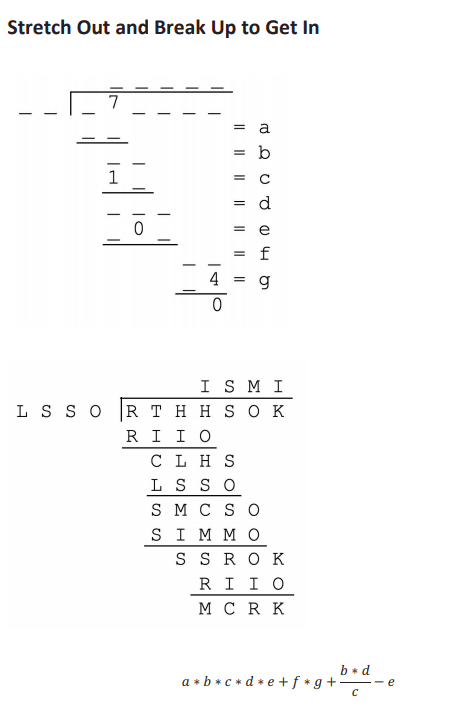 Within ten minutes of blowing through #3, Steve sent over this image with the message, “Did I make any mistakes so far?” 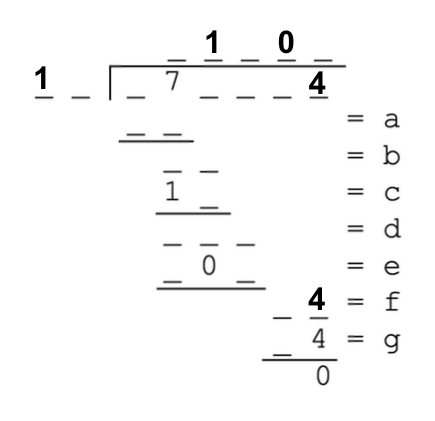 So it was clear that he was eating his Wheaties that morning. The first section required filling in numbers to make the division equation work out. This provided numerical values for a - g. His completed work: 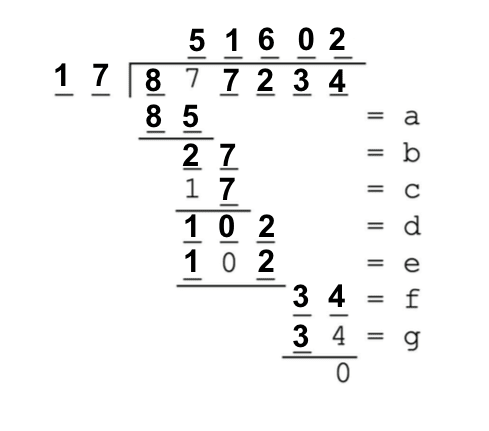 The second section was more of a cryptarithmetic problem, assigning single-digit integers from zero to nine to letters to make the calculation work out. A snapshot of Steve’s logic for that part:

Using the numerical values from the first part, filling them into the equation at the bottom, and calculating a total provided a large number. By this point, Jenny was doing calculations to double-check Steve’s math and here, their logic diverged. Steve only selected the numbers with lines under them for the a-g values, but Jenny selected the entire line and came up with a much larger number: 405,913,276. She succinctly explained her methodology with a callback to puzzle #3:

Puzzles: beaten (mostly). Pandemic: coped with. Team morale: strong! Overall, I’m thinking this puzzle day was even better than 2019. We grew our team a little, knew more about what to expect going in, and I feel like more of the puzzles were accessible. Or, at least, afterward, when hearing about the solutions, we went, “How in the heck were we supposed to know to do that?!” much less.

Once suspended, rpalo will not be able to comment or publish posts until their suspension is removed.

Once unsuspended, rpalo will be able to comment and publish posts again.

Once unpublished, all posts by rpalo will become hidden and only accessible to themselves.

If rpalo is not suspended, they can still re-publish their posts from their dashboard.